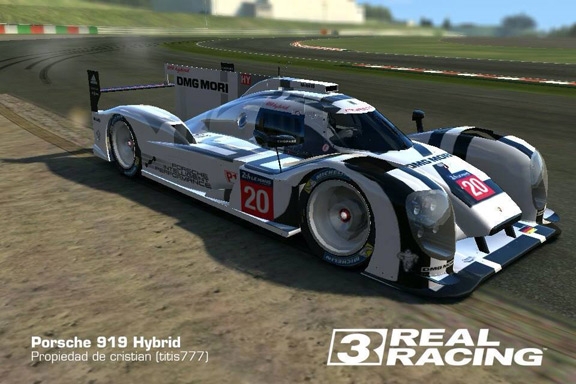 Party Play allows four friends to connect via BlueTooth controllers to an iPad, enabling local splitscreen multiplayer. Take your iPad out to your flatscreen TV with a HDMI adaptor and bingo, the Apple microconsole has arrived.

Whilst this feature alone is a fantastic addition, it's the timing of this update that I’m finding most interesting. Let me lay out some dots and then join them, just for kicks. Because it’s fun.

We’re only a matter of days away from Apple’s 2014 WWDC keynote, and there’s been much speculation on what surprises lay waiting to be unveiled. Apple has used the Real Racing series at previous events to show off new hardware, most notably the power of the iPhone 5, as the series is so visually impressive.

The made for iPod/iPhone/iPad (MFi) controller scheme hasn’t quite set the world on fire since its arrival late last year, but an official Apple controller, unveiled and showcased using Real Racing 3’s local splitscreen multiplayer - onstage at WWDC in few days time - would be a pretty awesome way to bring them to the world’s attention. Taking that thought pattern one step further, it's also a classic scenario to show how an Apple microconsole, powered by MFi controllers and four-player splitscreen racing, could provide a triple-A gaming experience for a fraction of the cost of your typical console games.

Or has this Real Racing 3 update just been timed by accident to coincide with WWDC?

A few sleeps and all will be revealed. Or nothing will be. Either way this is an awesome feature to have in the already awesome Real Racing 3, and takes the iOS racer - and Apple - one step closer to microconsole territory.

Whatever the future holds, you can check out the latest update in the trailer below, and download Real Racing 3 right now for free.

For daily updates on all that is happening in the world of indie iPad gaming, sign up to our newsletter.

Other Articles of Interest:
-
Top 10 Premium iOS Games of May
- A Step By Step Guide to Playing Quake III on your iPad
- Are Apple and Adobe Suffocating Digital Magazine Publishing?
- Ken Levine Jumped Off a Sinking Ship
- Hating on Tablets and Mobiles is Hating on Yourself
- User Experience vs. Download Size in Digital Magazines
- 50 Best Indie iPad Games of 2013
- The 10 Best Star Wars Games on iOS
- Psst. I Have A Secret... I don't like FTL: Faster Than Light