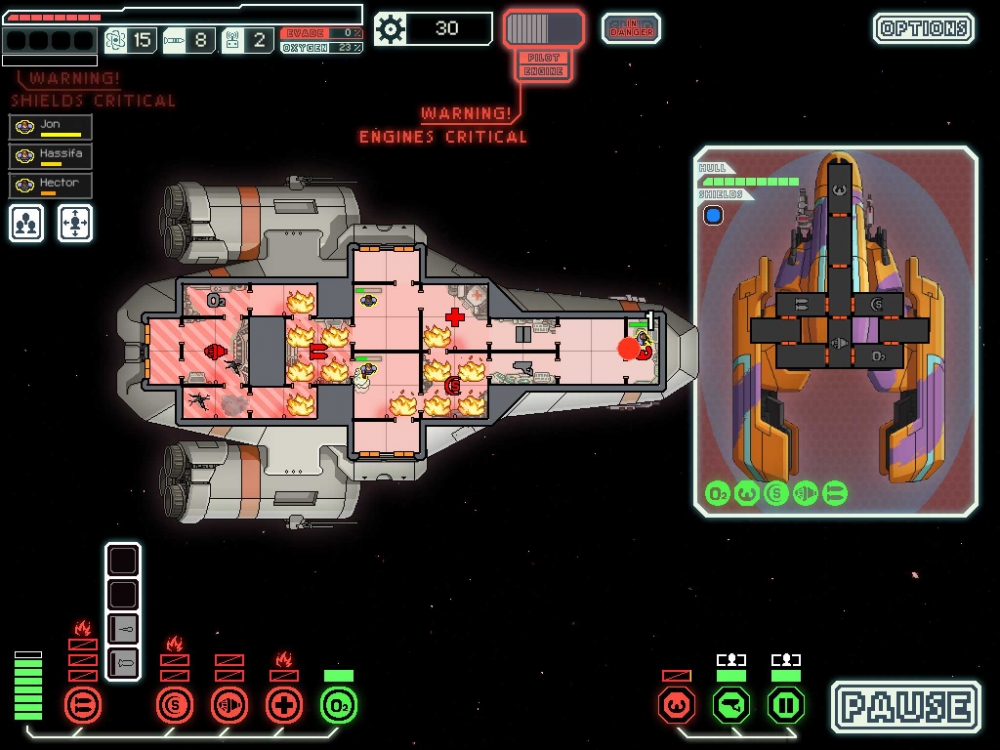 Pssst, come here. I want to tell you something. Closer, it’s a secret. Actually it’s kind of shocking, you might want to pull up a seat. Ok, you ready?

Released in 2012 on PC, FTL: Faster Than Light has since become the indie darling of the spaceship management genre. Having always been aware of its reputation, I was excited to load it up on my iPad in early April 2014 to take its updated version - FTL: Advanced Edition - for a spin. Touted by developer Subset Games as the definitive version, with numerous improvements and additions, I settled in and launched the game, set for a big night of crew management, resource balancing, space exploration, battles and, ideally, fun.

They say in space, no one can hear you scream, but back here on planet Earth, I’m pretty sure my neighbours did. I was soon feeling pretty frustrated as I failed and failed again - FTL was quickly and brutally stripping me of any desire to try and try again. I’d watched the tutorial, I’d taken the developer Subset Games’ advice for newcomers and set the difficulty to easy, and I’d switched off the Advanced Edition content.

The best way I can think to describe my experience is that for some inexplicable reason the ship’s captain had decided to take an urgent leave of absence, and the powers that be thought the next logical step would be to put the cook in charge after a brief five minute run down on how to put out fires and arm the ship’s weapons in case he encounter rebels. Then just turn him loose and say a few prayers for your crew.

Starting my game, a couple of minutes in and things were burning. In my panic I froze and completely forgot my fire drill training. Turns out spaceships are highly flammable. The fire spread quickly and my pixelated crew no doubt died painfully.

A couple of games later I had some sort of handle on how to deal with fires, opening the airlock doors and turning off the ship’s oxygen in a hope that this would starve the fire before my crew were starved of O2. But there is just so much more to learn with the systems upon systems that run the ship. I really don’t feel I should need to resort to the Google hive-mind just to be able to get past square one in a game. Surely it wouldn’t have killed Subset Games to devise a more comprehensive tutorial, or some levels that allow the player to gradually learn the mechanics, and slowly ramping up to full system management. I’m the cook remember? Show me to a sack of potatoes and I’m your man.

To put this into some perspective, my opinion is not that FTL is a bad game. I’m not saying the Emperor is doing a nudie run and I’m the only one willing to admit it. Subset has put together a deep and I’m sure satisfying experience for those who are willing to stick with it long enough to learn its vast and intricate ins and outs.

But I didn’t find the trial and error at all fun like some other difficult games I’ve enjoyed. Another of this year’s releases, Out There - my review and interview with developer Mi-Clos Studio can be found in Episode 3 of Grab It - has a much lighter style of ship management, but the difficulty is still quite harsh, and you will die many times before reaching even the easiest of the game’s three potential endings. But with Out There I found the dying and failure was tempered by interesting storylines and a lonely, lost in space atmosphere - its comic book panel visuals lightening the experience.

FTL on the other hand I found lacking in atmosphere. The story panels presented as literally just words on a page, failing to let me suspend belief and role play myself into its spaceship environment.

I could see there was depth aplenty hiding behind its stark facade, but I couldn’t find a way in to enjoy it. I guess at the end of the day, the Emperor was fully clothed, I just didn’t care much for his attire.

References:
- FTL: Faster Than Light Advanced Edition
- Out There