It's been a great year for the Australian games industry, but how large a part of that success is down to mobile versus traditional physical console sales? 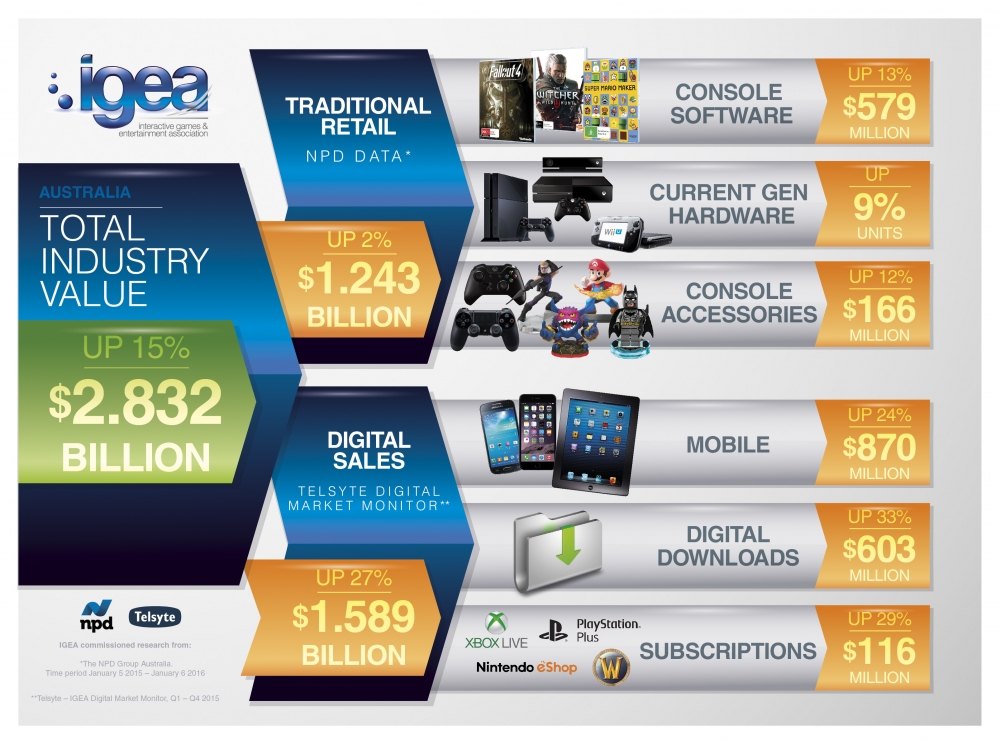 The last 12 months has seen some hugely successful game releases, from The Witcher 3 and Call of Duty, to breakout indie successes like Undertale, Ori And The Blind Forest and Rocket League.

It's no surprise then that digital sales have been going well. But recent statistics released by Interactive Games & Entertainment Association (IGEA) have shown that digital game sales in Australia have surpassed traditional sales by a wide margin. In fact, digital now equals about 56% of total game sales.

What cannot be understated in this latest sales data report is the raw power of our games industry. At a total value of $2.832 billion, gaming has almost double the value of the live music industry (at $1.5 billion) and is over half way to the film industry's result of $5 billion. Anyone doubting that the Australian game industry is a titan in the making need only look at these figures, and channel their inner Dr. Evil when talking about all those simoleans.

Stats Don't Lie
As of January 2016, the total industry value for the past 12 months is at $2.832 billion, which is enormous in its own right. But of that, $1.243 billion is from the sales of physical retail games, consoles and accessories, while $1.589 billion is from mobile games, digital downloads and subscriptions.

So looking solely at retail versus digital, Australians have spent $603 million on digital downloads and $579 million on boxed retail copies of games. At a difference of $24 million, retailers would need to sell about 300,000 more boxed copies of The Division that it racks up in sales online.

Looking at the infographic above, it is clear that there is a huge shift in the sales numbers and type of media that Aussies are buying into, but overall everything is on the rise. The sales of consoles is up 9% from last year, even though it has been just over two years since the last major console releases in late 2013.

Retail copies are still rising, despite slowing from previous years, showing a preference now for retail copies when looking for a gift or something special like the Fallout 4 Pip-Boy edition.

Digital extras like season passes have exploded faster than a Rico Rodriguez fireworks show with 53% growth in 2015. And console accessories have grown by 12%, which I am sure is mostly due to the successes of the Amiibos and Lego Dimensions.

What About The Future?
It's all well and good to say that the industry is going strong, but how is this going to affect the ordinary game loving public?

We can see from the growth numbers that this trend is on the way up. Mobile sales have risen 24%, digital sales have gone up by 33% and subscriptions have increased by 29%. The growth in digital sales we can likely attribute to online marketplaces like Steam, GOG, GreenManGaming and console marketplaces. The ease of purchase for digital games cannot be understated, and it seems more and more people are jumping on the bandwagon.

Subscriptions have increased the least, and remain at the lower end of digital sales with only $116 million, comparable to the sale of hardware accessories on the physical side. This is likely due to the steady decline of the MMO genre as titans like WoW continue to backslide. I would love to see this stat broken down to include micro-transactions, as this is most likely the future of the subscription model as we see with games like DOTA 2 or League of Legends, where micro-transactions are everywhere and very successful.

For mobile we only need look at the continual improvement of hardware - Nvidia believes that mobiles will be able to catch up to consoles by next year. You only need look at the success of games like Hearthstone and Clash of Clans to see mobile gaming is a viable alternative for gamers on the go. As we move forward, expect to see more powerful mobile devices and developers with a better grasp of how to make touchscreens work, and in turn we'll see better games and more active player bases.

These stats show quite definitively that mobile gaming is a valued part of gaming culture, and it is here to stay.

Also Read: Is The Witcher 3 too long?