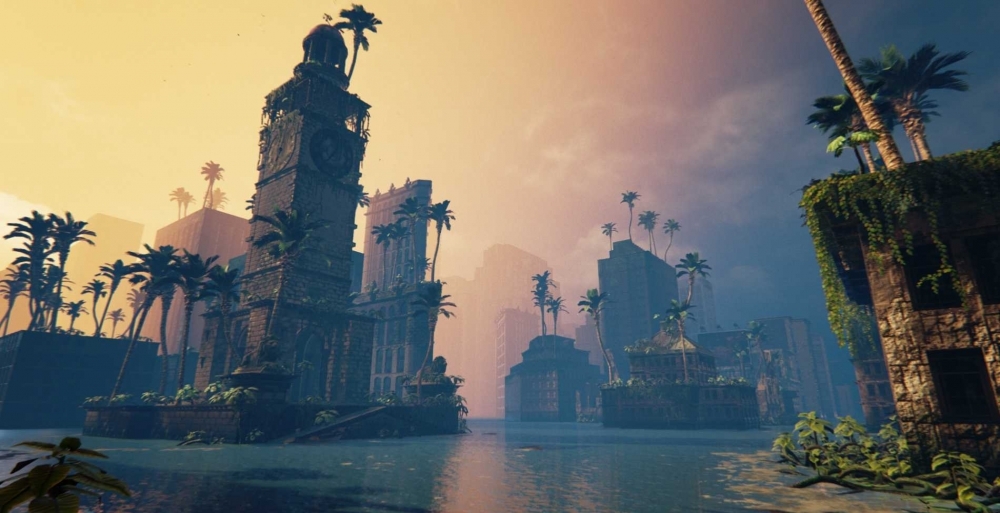 There is no denying Uppercut Games' upcoming Submerged has visual appeal. That much was clearly evident from the early screenshots we posted back in June.

Today, however, we've seen movement and life brought to those previously static landscapes, in the way of the official trailer. The video does a wonderful job of implying a lot but only showing a little. In fact, throughout the development cycle thus far, Uppercut has so far succeeded admirably in walking that fine line of drip-feeding enough information through its development blogs to keep us interested, but not too much, so as to retain a sense of mystery and anticipation.

Accompanied by sombre piano and strings, we see what I assume to be our main characters drift to shore through an destroyed city. The tiny exposed rowboat, and towering imposition of the half-submerged buildings emphasise their vulnerability. The female of the pair climbs out of the boat and onto shore, carrying a small boy in a clearly weakened state. The look on her face is one of desperation. It's a beautiful sequence.

The little we know of the story and setting fleshes out what we see in the video. Players will be exploring and adventuring through this decaying city in an effort to save their brother's life, with supplies at a minimum.

With one carrying or leading the other through these ancient ruined buildings, there are definitely echoes of legendary PlayStation title Ico in Submerged, although the actual gameplay mechanics are yet to be revealed, so we won't speculate too much.

Uppercut's history on iOS has so far been a successful one, with Snowjinks and its sci-fi series EPOCH bringing intuitive controls to cover-based shooting on touchscreens. So at the end of the trailer when we see "Coming early 2015 for PC, Console and Mobile" we feel pretty safe in assuming this means iOS, but we'll do our best to confirm this.

The release of this trailer is doing a great job of keeping Submerged very high on our list of games to watch out for in 2015, watch this space for more info as it comes to hand.

Update: We reached out to Uppercut Games and just heard word that yes, Submerged is definitely coming to both iOS and Android. Happy Days!