Looking for games to play on your Apple TV? This 20 year old gaming icon, and ridiculously fun arcade racer have you covered. Firing up a new gaming platform in the first few weeks of its lifecycle can be both an exciting and disheartening prospect. Once the wide-eyed and careful unboxing, the lounge room gymnastics of plugging in, and first ever switching on as you listen and watch for sounds and screens that will soon become old hat all pass, you're left with the games. And usually, as early adopters know, pickings are slim.

It's a price many are happy to pay, as a big part of the trade-off is the enjoyment of being there from the start, feeling like part of a community all sharing in the excitement together. While you know that apart from the handful of hyped launch titles the catalogue will be lean for a while, that knowledge is offset by the anticipation of the good times ahead. Simple bragging rights are a big appeal too.

After three generations of Apple TV, for gamers, the fourth was the charm. Armed with a shiny new SteelSeries Nimbus, this writer performed the ritual outlined above and went trailblazing through the big screen App Store's offerings in search of games.

There is no shortage of them, but the bulk at this stage are either simple one-touch affairs (eg. Mr. Jump and Jetpack Joyride) or multiplayer party games such as Beat Sports. Over the weekend in question, other warm bodies were thin on the ground, meaning party games were not an option, although we're keen to explore and bring news on those in the near future as the platform seems well positioned to capitalise on the genre. In regards to the one-touch joints, we've a feeling they're best left to mobile platforms where they shine.

We wanted to find the more traditional gaming experiences, the shooters and the platformers, adventures and RPGs. As expected, at this stage there aren't many, but there are some, and some of those are very much worth getting your hands on. We'll post a more comprehensive list of games that have meat on their bones in the not too distant future, but for now we thought we'd post a quick rundown of two that will help justify that secondary function of your Apple TV - that of a microconsole.

And you can grab them both for free. 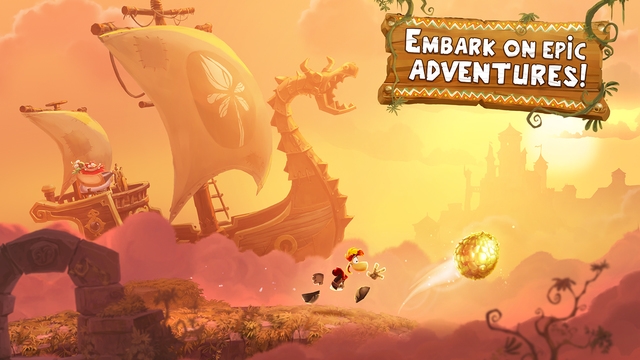 PlayStation is not the only gaming icon celebrating its 20th Anniversary in 2015, as 1995 also saw the birth of Michel Ancel's creation - Rayman. The early games in the series are examples not just of great platforming, but also of wonderfully expressed artwork that employs the abstract and surreal to depict its characters and worlds.

A run of not so great spin-offs left Ubisoft's mascot slightly abused by the end of the 2000s, but Rayman Origins (2011) and Rayman Legends (2013) saw the icon return to its platforming roots, with restored credibility thanks to great level design and stunning visuals.

The last couple of years has seen excellent mobile outings for the character as well, with Rayman Jungle Run and Rayman Fiesta Run. While playing to the mobile platform's strengths and iterating as auto-runners, they are great examples of the genre, bringing to touchscreens the IP's level design and visual strengths.

Early Apple TV adopters are lucky then to have a new Rayman outing available as a launch title for the new hardware - Rayman Adventures. The title is also heading to iOS, but a big flatscreen, fat speakers, and an MFi controller is set to be the definitive experience.

Why, I hear you ask? Without an MFi controller, and just using the Siri Remote, Rayman Adventures is an auto-runner. You can change directions but you can't completely stop at will. This works fine for the mobile platform where it's expected due to the limitations of touchscreen input, but on a microconsole we're looking for more. Connecting a controller unlocks full freedom of movement, turning the previous auto-runner into a fully-fledged 2D action-platformer.

And it's a pretty good one at that.

The game itself is everything you would expect from a Rayman adventure since 2011's return to form with Origins. The imagination behind, and the execution of the visuals is as strong as ever. While I'm only in the early stages, the first two worlds I've unlocked have revealed varied environments with Medieval and Mt. Olympus themes.

Within each world there are varied types of levels, some containing combat, some that focus on a particular mechanic such as using your propeller hat to catch updrafts in order to gather collectibles, and secret areas to find.

Rayman Adventures is not perfect though.

While there have been some nice ideas presented so far in these early levels, involving vines to swing on, rapids to navigate, and the previously mentioned updrafts, the level structure does feel a little simplistic, as does the combat. It's possible of course that these early stages will prove to be more of a training ground for more complexity in later levels. We're certainly hoping for this to be the case.

It would have also been nice to see Rayman Adventures release as a premium paid game, however it's a nice easy grab on day one of setting up your Apple TV for zero extra dollars out. There are currencies with which to feed the helpful creatures you collect (which give your avatar powers), gems to spend on outfits, and tickets to scratch for bonuses. Timers also play a part in the eggs you find which hatch over time into new creatures, with the idea being to collect them all. You can speed up the timers with another currency, and of course the gems that rule them all can be bought in bundles for various amounts of real world dollars.

It's a little scary to see an in-app-purchase available in the shop for no less than AU$139.99. No that's not a typo. That alone may of course put some players off, and fair enough too.

If you're willing to navigate the free-to-play mechanics, Rayman Adventures is still a fun addition to the IP's stable, and with an MFi controller connected - converting it into a full 2D platformer - it ranks somewhere in between the previous two console titles Origins and Legends, and the mobile titles of Jungle and Fiesta Run. And that's quite appropriate considering this is running on what we'd call a microconsole. 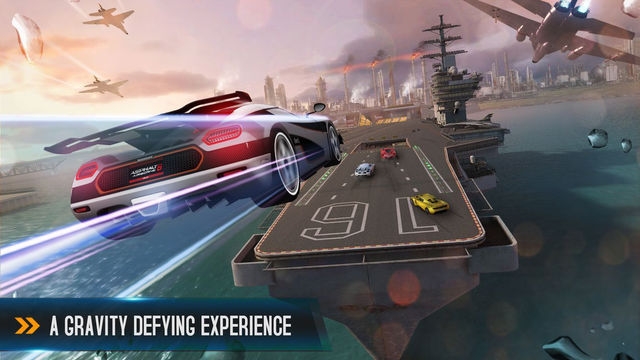 Expecting a similar experience on Apple TV, I was happily surprised at what I found. Asphalt 8 benefits greatly from the conversion to the big screen.

The simple addition of a flatscreen and a traditional gaming controller seems to add value to what on touchscreens feels like a quick throwaway title. I suspect this will occur with many mobile to lounge room transitions.

Using the tilt controls of the Siri Remote is a workable option, but the device feels too light, and thus imprecise for the quick arcade manoeuvres the game requires. A controller on the other hand opens up the gameplay to a tonne of pure, slick fun.

Starting out with the "lowly" Dodge Dart GT, and with the aim of one day unlocking supercars from makers such as McLaren, Ferrari, and Koenigsegg, this is old-school arcade with a shiny 21st century makeover. Up to a point.

This is no triple A PS4 or Xbox One racer, but the visuals are smooth and the gameplay is so immediate and fun that these strengths make up for any triple A shortcomings.

There are cars, tracks, and race modes aplenty to keep players occupied for the foreseeable future, with no doubt more on the way.

The tracks have some nice design elements, with shortcuts to find, crazy over the top air courtesy of ramps, and some nice locations and themes, such as Nevada, Iceland, Tokyo, The Great Wall, Temple Drive, and more.

There's classic racing against AI, which is nice and aggressive given that this is not about polite realism, this is about the takedowns highlighted by a slowdown effect and camera movement harking back to the Burnout titles.

One fun mode in particular is Infected - where the last racer gets a timer and explodes when time is up, but also has unlimited nitro, and hitting other cars will infect them while adding precious seconds to your timer.

There's also multiplayer and special events which will add infinite longevity. At the time of writing there is a Black Friday race event in which I quickly got my rear bumper handed to me, sending me scurrying quickly back to the safe anonymity of racing against AI.

The free-to-play structure actually adds a nice progression system to proceedings, taking you through the classes of cars, tracks, and modes, earning currency as you go. The option is of course there to shell out for more to speed up progression, but I've been having a blast grinding in previous tournaments as the gameplay itself is just so more-ish.

As with any system involving multiple currencies, time is needed before a definitive verdict can be given, but so far I've no hesitation in recommending Asphalt 8 Airborne.