Xeodrifter treads the line between being empowering and frustrating, but which side does it end up on?

Rare is the game these days that refuses to hold your hand. The tutorial is nigh ubiquitous and often insufferably droll: I groan every time I'm forced to trudge through another unskippable diatribe on the mechanics of analogue camera control. For first-time gamers, these directions might be useful, but for the vast majority of players, they're just irritating. It seems foolish that for all the advances games have made, there is no established convention for bypassing the boot-camp overtures and getting straight into the action, for both the veteran gamer and those of us who prefer to wing it rather than absorb the manual.

Unfortunately, this trend of underestimating the competence of players isn't limited to tutorials. The Call of Duty campaigns are regularly referred to as corridor shooters, funnelling players through scripted sequence after scripted sequence and offering little to no agency over direction or pacing - players can't even open doors on their own, instead having to wait for AI companions to do it for them. The Gears of War series introduced the idea of "points of interest," scripted events that pluck the player from the moment so they can stare impotently at a story beat. Other games have taken that concept even further, wresting control away from the player entirely in order to highlight an explosion or showcase physics in action as a building collapses in on itself.

By severing the player's connection with their avatar, these moments reinforce the fact that you're not in control, that you're only following a path someone else laid out for you. I don't know about you, but for me there's nothing more immersion-breaking than being reminded your sense of control is just an illusion.

This is where Xeodrifter comes in. From the get-go, the gorgeous 8-bit throwback to Super Metroid foments an air of desolation and loneliness, and not once does it jeopardise this mood with excessive explanation or exposition. After a swift overview of your dilemma - stuck in space with pieces of your ship's warp drive scattered across four planets - the game ceases to offer any direction whatsoever, leaving the task of deciphering the controls, mechanics and the very nature of the game itself up to you alone. Aside from a tiny info box appearing every time a new power-up is obtained, learning is achieved purely through trial and error. 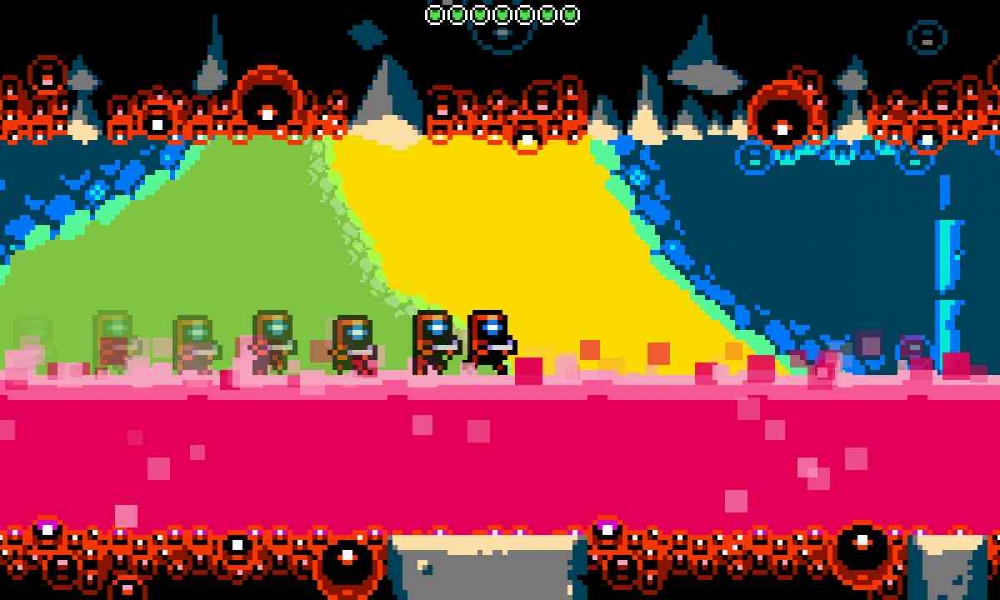 I cannot stress enough how refreshing that feels. Xeodrifter respects your intelligence and your capabilities, trusting that you can figure it all out by yourself. Reached a dead end? Maybe you're on the wrong planet. Enemies too tough? Maybe you should go back and search for the health and weapon upgrades you passed but couldn't reach earlier. There are no obtrusive button prompts, no blinking objective markers, no condescending cutscenes demonstrating how to jump. I didn't even realise the game had a proper map system until I was halfway through!

By refusing to shepherd the player, developer Renegade Kid has channelled the same cycle of struggle and satisfaction that has made the Souls games so popular. What is at first obscure gradually gains clarity, shifting from impossible to conquerable once that final cog clicks into place inside your head. That incorrigible boss and his invulnerability shield become trivial once you realise the solar flare upgrade is more than just a tool for exploration. The accompanying surge of accomplishment is immense - but only because you died 57 times before you figured it out. If the game had handed you that crucial information on a silver platter, your satisfaction would be significantly tempered.

But it's a fine line: Xeodrifter is a punishing game. Again like the Souls series, it is quite possible that you'll find yourself frustratingly stuck, adamant that you have explored every possible nook and cranny a dozen times over to no avail. In these moments, it is understandable that some players may resort to a game guide or decide to abandon their quest altogether. Compounding Xeodrifter's punitive nature are the imperfect controls. Shooting is limited to the four cardinal directions, lacking even the diagonal fire of its 20-year-old inspiration, Super Metroid. Movement is slippery, with the amount of momentum generated from running occasionally contributing to mistimed jumps into the fatal path of waiting enemies.

These gripes, though, only serve to heighten the sense of triumph when you succeed in spite of them. Where carving through a swath of gun-toting criminals in Battlefield is nothing special, getting the better of a single, insufferable bug-eyed baddy in Xeodrifter is worthy of its own celebratory parade. Even though the game only clocks in at a couple of hours at most, it left me feeling both more exhausted and more rewarded than I do after most 60-hour JRPGs.

Xeodrifter isn’t for everyone. Those who aren't fans of the trial-by-fire approach, or who aren't prepared to bash their heads against a wall a few dozen times, need not apply. But if you're open to exploration and in the mood for a solid challenge, it's definitely worth a look.

Buy it here on Steam.