SMG Studio has a history of creating incredibly addictive games, but can lightning strike twice for the Australian developer as it rolls out a sequel to mega hit One More Line? 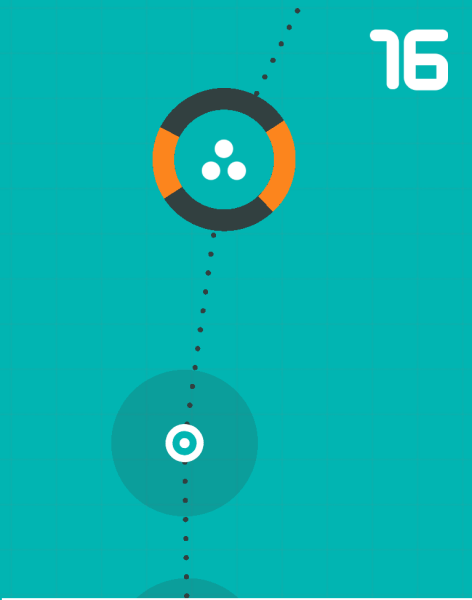 I will unashamedly admit that I easily sunk dozens of hours into the SMG Studios' previous two games, OTTD and One More Line. Both games still occupy a special place on my iPad home screen and get regular use.

One More Dash is the latest finger-taping, eye-popping, mind drug from SMG Studio, which seeks to capitalise on the popularity of its predecessor, One More Line. As a direct sequel, One More Dash doesn’t reinvent the wheel in terms of gameplay - not that said wheel was awfully complex to begin with. However, the indie developer has taken many of the best features from One More Line and refined it like a well crafted beer to create a worthy sequel that bubbles with same addictive deliciousness required to justify the name "One More."

Similar to its predecessor, One More Dash adopts a simple single touch mechanic. This time around the objective is to tap the screen at just the right moment to make your little ball jump from one safe node to the next. Of course it’s never as easy as it sounds with rotating barriers blocking your way. If you don’t time your jump perfectly, you’ll either be flung off into the ether or impale yourself on colourful spikes. It’s a simple idea, but implemented well and it quickly becomes supremely addictive.

Also read: How to play One More Line like a boss

After playing for a few hours, I would say that it is slightly easier to achieve a competitive score in One More Dash than in One More Line. After about 30 minutes of game time I had racked up 180 deaths and a high score of 203 (which was the best in the world at that time might I add!) But I did come to appreciate the subtle strategy that is required to do well. Upon hitting a new node, you only have two to three seconds to react before time runs out and your little ball explodes. However, you may not be able to safely navigate to the next node in that time. If that’s the case, the only way to survive is to time your jump so that you bounce off a rotating barrier back into the node from which you started. That will restart the countdown timer. Trust me, it's simpler than it sounds and becomes easier with practice.

One thing that I really enjoyed about One More Line was its audio. It had an electronic/robotic feel to it, which suited the gameplay perfectly. Although the audio is still excellent in One More Dash, it doesn’t quite have the same hook. It isn’t quite as catchy and didn’t motivate me as much to go for “one more dash.” If you’re interested in checking out the One More Dash soundtrack, just head on over to Jared at Batteries Soundcloud.

Also read: Our Three Interviews with SMG Studio on the making of OTTTD, One More Line and Hyper Robot Death Party in Episode 8 of Grab It.

A rather neat feature of One More Dash is that challenges have now been included, like collecting a certain number of orbs in one run or lasting for a certain amount of time. Completing challenges awards orbs that can be spent on cosmetic items that change the colour scheme of the game. It’s just a small thing, but it keeps the game feeling fresh and interesting, and for those of us who are compulsive achievement hunters, something to work towards.

SMG Studio knows how to craft a game that digs its claws into you and refuses to let go. Although One More Dash isn’t drastically different from One More Line, it does enough to feel fresh and still manages to retain that compulsive feeling that will have you screaming “just one more dash!”

You can grab the game right here for free (or pay to remove ads).