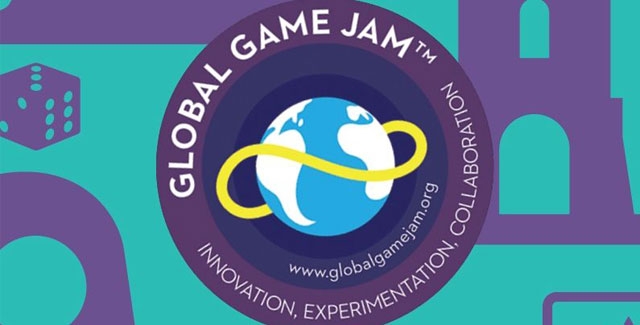 It's quiet, too quiet. The auditorium slumbers in the darkness like a great beast, the many minds focused on one singular mission. To make games. In the distance, hungry hands tear ravenously into a packet of Doritos, the hiss of a can of Pepsi snaps the silence like a twig. The tension disappears into a haze of murmers and cheese powder and the projector flares into life. The keynotes begin…

This is the Global Game Jam.

Somewhere in the labyrinthine confines of the Swinburne campus in the suburb of Richmond, Victoria, hundreds of eager minds divide themselves into over 50 teams, each wanting to make the very best, most ingenious, obscure and unique experience possible. I have been to three game jams as a developer, but this was my first as a member of the press. I can tell you it is a wholly different experience watching people crumble in different ways over the course of two days.
If you've never been to a Game Jam, or don't even know what the term means, I highly recommend that after reading this article you Google "Global Game Jam 2015" and play some of the games I'm going to talk about.

So a game jam is an occasion where anybody with a love of games congregate with other like-minded souls to make games in a condensed environment, usually under time constraints. The Global Game Jam is easily the biggest annual event, and this year 28,837 people from 78 countries competed, creating 5,438 games - impressive. Now compare that to how many games have been released by the major developers. Think about how many games you have played this year. That staggering figure shows the power and the coordination of the growing indie community. There is no doubt in my mind that some of these games will go on to be the next Super Meat Boy or Limbo or Screencheat. It all comes down to the dedication of their creators.

The people who have attended the 2015 Game Jam are as varied as the games that they will make. A fractured mix of different ages, sexes, ethnicities and experience, ranging from students to hobbyists and professional developers. After the Keynote speeches are over, the theme is revealed. You see, game jams always have a theme - like a guiding force that pushes the designers in one way or another - and the theme can be interpreted as literally or figuratively as they like. This year's theme is...

It's joyfully obscure, wonderfully freeing and at the same time powerfully suggestive. To me it screams multiplayer, it screams trial and error, but mostly it screams things going horribly wrong. They often do in a game jam. So with that the jammers split themselves up into groups, spread across four levels of the campus' computer labs, and set about scheming, designing and arguing. There was a lot of arguing.

So the first night was underway and games slowly began to take shape. Somewhere within the haze of Red Bull, the taste of Pizza and the acrid smell of someone burning the coffee, these teams each claimed a small corner of the building to call their own, laid out sleeping materials and set about plugging in computers, recording equipment, tablets and headphones. One team even connected a treadmill.

Most of these teams didn't know each other coming in - two friends might come together, then meet up with two more friends and make a team. Two Melbourne indie teams PageBreak and Terran Studios came together and set about swapping project leads, game designers and artists to create two unique groupings. I checked in with both and will talk about their games when I see more.

So I wandered slowly from room to room and looked in on the different groups tackling the theme in different ways. I sat in on discussions about exploding sheep, ravenous desk chairs and a pig cannon. I didn't say that this trip down the rabbit hole would be one of normality did I? But for now we will leave the jammers to their jamming and see what they are up to tomorrow.