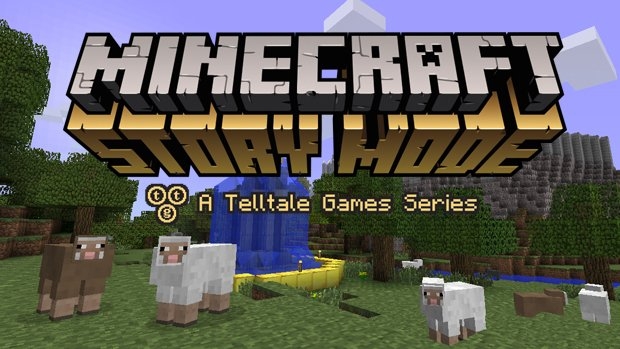 Over the last few years, Telltale Games has stepped out of the shadow of Monkey Island, and into the modern era with hits like The Wolf Among Us, Game Of Thrones and The Walking Dead. These titles have been thought provoking, evocative and, at times, poignantly sad. There testament to the skill and apparent ease with which the writers at Telltale approach dense and dangerous source material. Source material that for the most part other companies wouldn’t even approach for fear of enraging diehard fans. So it is with some trepidation and a little uncertainty that I’ve pondered the idea of a Telltale made, story driven Minecraft spinoff.

We announced this title and discussed it a little yesterday in this piece: Why is Microsoft Making Games for Sony Players. The announcement came over the holiday break through an 8-bit Minecraft-themed title by Mojang called Info Quest 2, where players answer questions and get given info about the new title in response. Apparently it won’t be as gritty and bloody as previous Telltale titles, which is a bit of a shame. I have always wanted to know what the inside of a creeper looks like, apart from whispy smoke and regret.

Well, months ago we all held our breath awaiting the changes Microsoft would be making to the Minecraft world after purchasing the title in September. It seems like tying down at least some of the world is first on the agenda. A cynical part of my brain is whispering that Microsoft is trying to milk its new cash cow as quickly as possible, but the more reasonable angel on my shoulder tells me that if this was a cash grab, then Microsoft would’ve chosen a company with less pedigree than Telltale Games.

I have no doubt that Telltale can make something great out of this partnership, but whether working with a publisher like Microsoft will be to the indie studio’s benefit, or whether the project will be pushed out too fast or be interfered with in some “evil publisher” kind of way is yet to be seen. But like a new iPad, another Marvel movie and Star Wars Episode VII, whether it is pure gold or solid garbage, it will sell. It will make money. So at least for Microsoft and hence for Minecraft, it should be a good move. But then again, so would Minecraft car insurance.

As for whether this is what we want next from Telltale, well I don’t think that anybody saw A Game of Thrones coming from the studio, but anybody who has played that title knows it’s spectacular. There are a lot of worlds that I would love to see Telltale approach: a gritty Star Wars bounty hunter title perhaps? Or the dangerous and twisted underbelly of Sin City, depicted in the stark art style of Frank Miller’s graphic novels. But I don’t work for Telltale, and unless someone over there reads our favourite little games mag Grab It, the studio probably won’t hear my fantastic suggestions.

I admit I’m sceptical. I was sceptical when Microsoft bought Mojang and I have no doubt I will be sceptical until this game is on my tablet and my review is complete. It isn’t what I expected next out of Telltale nor what I would have chosen. But it is up to Telltale to show us why this is a good move and why the most emergent narrative driven game ever can conform to a structured style.

When it comes down to it, this is the first big move that Microsoft has made with the Minecraft license and time will tell whether fans trust the tech giant with their voxel baby. Because as Notch stated in his final statement to the public when selling Minecraft, “it belongs to Microsoft now. In a much bigger sense, it’s belonged to all of you for a long time, and that will never change.”

Read our review of Telltale’s Tales of the Borderlands, or check out the damn coolest digital magazine ever created with our free sample episode.

References:
- Minecraft
- Tales from the Borderlands
- Game of Thrones
- The Walking Dead
- The Wolf Among Us