Shadow Warrior 2 is part Borderlands and part Doom, with a liberal sprinkling of Duke Nukem thrown in for good measure. It's a fast, frantic first-person action game with an emphasis on gunplay and slick ninja skills. Where most modern shooters have you hunkering down behind cover, Shadow Warrior 2 gives you the tools to dart, dash and stab your way across the battlefield like a sociopathic Sonic the Hedgehog.

Shadow Warrior 2 follows Lo Wang – you can think of him like the Yakuza version of Deadpool. He likes sharp swords, fast cars, easy women and wang jokes. Everything from “you mess with the bull, you get the Wang.” To “I'm gonna teach these guys to fear the Wang,” will tickle your ear canal. It's awesome to see developer Flying Wild Hog Games double down on the Shadow Warrior concept and push for something larger than life. In fact Shadow Warrior 2 feels like an most overt stab at critics of the first game:

There is a story in Shadow Warrior 2, but for the life of me I can't explain it with certainty. Although the writing is great, the overall narrative arc can get a lost between the gore at times. It follows on directly from the events of Shadow Warrior - the 2013 reboot, not the 1997 original - where Wang fought inter-dimensional demons and eventually killed a god, causing a number of dimensions to mash together.

This sequel really could have used a “previously on Shadow Warrior” lead-in as without it I found myself struggling to remember returning characters, Embarrassingly I had to look up a wiki more than once to work out how everyone fits in. The short version is that Lo Wang finds himself looking for the adoptive daughter of his mechanic/blacksmith. When he finds her she is a little bit possessed, so they place her soul into Wang's body and he sets out to cure her. Hijinx ensue. The absolute best banter in the game (and in most games in recent memory) happens between Wang and the girl Kamiko, who is a naïve, straight-laced scientist who finds Wang utterly deplorable.

This isn't a game for the 15-year-olds, that's for sure, but definitely for the 15-year-old inside all of us. It's got more bad jokes than you can shake a Wang at. It's got blood in spades (or buckets?). And it's very very fast; like this year's Doom reboot on speed. It's the sort of game that you pick up and play for half an hour with a mile-wide grin the whole time.

One mission had me checking on a local tea plantation infested with demons. Wang pointed out that: “this is some hipster bulls**t to grow tea in the post apocalypse”. He doesn't take very much in the narrative seriously, and it's great to see a protagonist who pokes as much fun at the samey objectives in modern games as we do.

These off-the-cuff one-liners made Wang feel like a guy just trying to make light of a bad situation, and it made me all the more eager to see what would show up next. 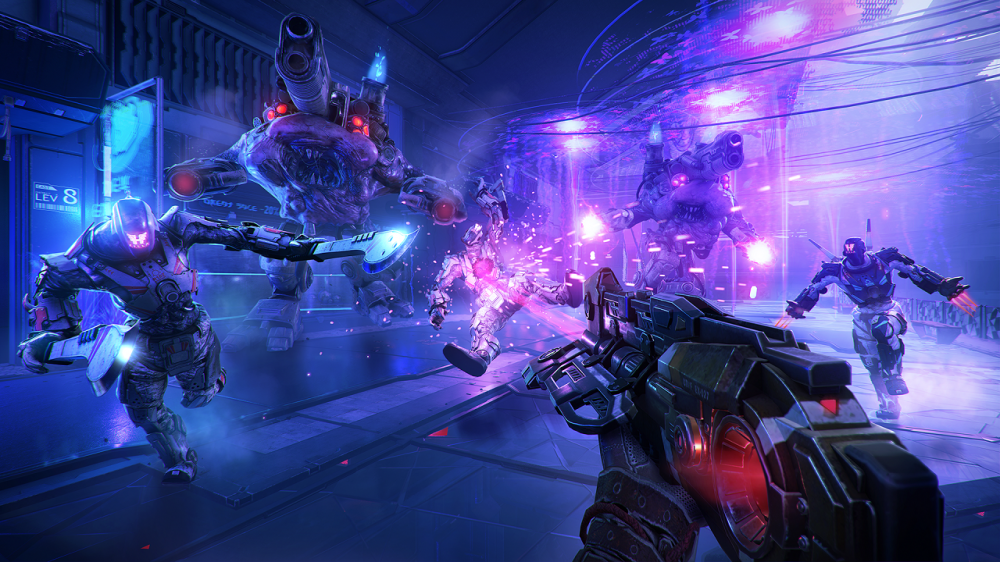 Demons are a pretty standard staple in modern games, so it's great to see them done with a bit of flair and ingenuity. Partnering them up with Yakuza, cyberpunk robots and mutated animals gives some great variety. These enemies aren't the brightest in the bunch - in fact most of them just run at you while the ranged ones sit back and shoot. But they do react wonderfully to everything that happens to them, and that makes them feel alive.

Wang's penchant for things that go slice or boom means you can knock off limbs, blow enemies to pieces and take out great gaping chunks from their frames. I did find that I couldn't get quite as much precision as I wanted with the aiming and it's a shame enemies couldn't be completely disabled without killing them. I wanted to chop off both arms and see if they would run limply after me - but sadly that level of violence was just out of reach.

There are some really great ideas with the enemy design; like little hopping demons called Claws. These chase and bite you in small groups. Trouble is, if you hurt one without killing it, they'll transform into hulking demon big-daddies called Talons, and that makes them a force to be reckoned with. As for the aforementioned demon bunnies, they're horrifying. All throughout the game there are little bunny rabbits hopping around and if you shoot one it drops a health pack. But there is always a chance that instead of popping like a meat pinata, it'll spawn the Bunny King - a huge slathering, flaming bunny with shark-like jaws and glowing eyes. Adorable. 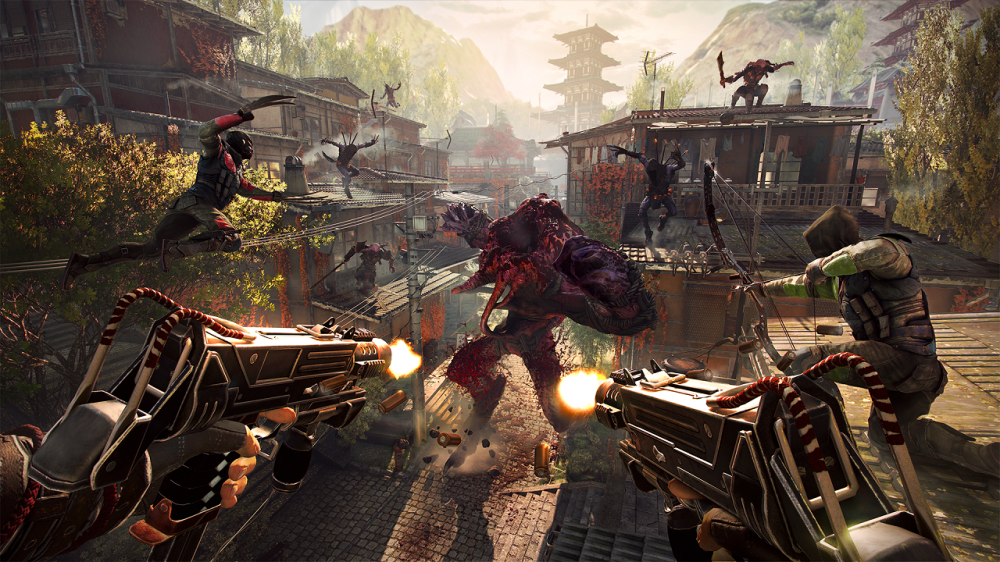 ...And Plenty of Ways to Kill Them

Swords, pistols, revolvers, machine guns, rocket launchers, shotguns, and any manner of other ordinary weapons. Add to that steampunk gauss rifles, wolverine claws, laser katanas and a chainsaw that's so precise I could probably carve my name with it.

Shadow Warrior 2 boasts over 70 death dealers in a huge range of styles, from traditional ninja kit to cyberpunk and demon weapons. They all have their own individual visual effects and mostly unique sounds, but even within the same category there can be some huge differences. One katana might slice and dice, while another can shoot laser blades whenever it's charged. So you may prefer long blades, short blades or shotguns. But it's worth trying out each new weapon as you collect them, because these archetypes are loose and can have really different styles within.

You can upgrade your character and personalise your Wang however you see fit (I think he'd like that joke). As you progress you'll unlock abilities and points to change the way your adventure pans out, too. For me that meant putting points into my sword skills (namely a hurricane spin attack and a savage long-range thrust).

There's also a rudimentary RPG system that lets you customise your weapons with elements like fast reloads, more damage, splitting bullets and more. This means you can take a cool weapon and make it cooler, which is especially great when you team up with friends.

Indeed one of the biggest selling points of the new game is four-player co-op, which plays much like Borderlands. Fundamentally, it's brilliant that all of the levels seemed to work just as well whether you're on your own or with friends. There's plenty of room to move in all directions. Admittedly the enemies can get a bit bullet-spongey when you add more players, but it's easy to overlook that when you and your friends are busy slicing a 12-foot tall demon into mince meat.

Shadow Warrior 2 is an over-the-top, bloody mess with its tongue planted so firmly in cheek you couldn't pry it loose with a crowbar. Do you want to smile at a cacophony of dick jokes for about 12 hours? Do you want to cut demons to ribbons? Do you want varied environments and vertical combat? That's pretty much what you'll get, plus a whole lotta Wang.