It was only the other day we were walking the gameplay plank in our Top 10 Pirate Games of All Time article, and while those of you yearning for a return of swashbuckling extraordinaire Guybrush Threepwood may have wait a little while longer, we may have the next best thing incoming. We talk of the Monkey Island inspired adventure, Duke Grabowski.

At the helm of the project from Venture Moon Industries is industry legend and LucasArts alumni Bill Tiller, who has worked on titles like The Curse of Monkey Island, The Dig and Full Throttle. Although the portfolio of games that Tiller has worked on over the years is expansive, he seems to have a passion for pirates. Tiller also worked on the pirate adventure game Ghost Pirates of Vooju Island, which released in 2009.

Duke is a rather big and brutish fellow with a harsh exterior. In fact, he usually resorts to letting his fists solve his problems as he suffers from IED (Intermittent Explosive Disorder.) But it seems like Duke secretly has a soft heart and wants to change his thieving, murderous and cunning pirate ways. In the words of Tiller:

“To become captain of the pirate ship Brazen Blade, Duke is given a challenge by his crew: to win the love of three women. Or, more precisely, to "sea-deuce" them, as old Slewface says with a leer.

Slewface is the villain, and the challenge is sexist, and Duke has to realize it over the course of the game. When Duke gets to shore and meets actual women, everything changes. He has to relate to them as actual human beings.”

It’s an interesting storyline that is likely going to be good for a few laughs. To head off any pre-emptive debate about whether the game is going to be sexist – presumably in the vein of seducing women like Leisure Suit Larry – Tiller has noted that:

“…the story is really about peer pressure, the dangers of following the herd, and about watching a character change and mature... ultimately Duke is such a naturally good guy he will eventually end up earning the respect of the three women by helping them out with various tasks and quests.”

Tiller and Co certainly aren’t shy about their Monkey Island roots. One of the game’s protagonists, Sheriff Nancy Steele looks suspiciously similar to Governor Elaine Marley (see screenshot below.) Even the game’s title “Duke Grabowski, Mighty Swashbuckler!” plays heavily off an infamous line from Monkey Island, when Guybursh introduces himself as “Guybrush Threepwood, Mighty Pirate!” Even with this inspiration, I'm confident that Duke will have the chops to establish his own personality.

Apart from Monkey Island, the team’s inspirations for Duke Grabowski reads like quite an eclectic shopping list – Mongo from Blazing Saddles, The Hulk, Brian Urlacher of the Chicago Bears, the Pirates of the Caribbean films, and the swashbuckling movies of Errol Flynn and Douglas Fairbanks. I can’t quite tell how much tongue in cheek should be read into this list… 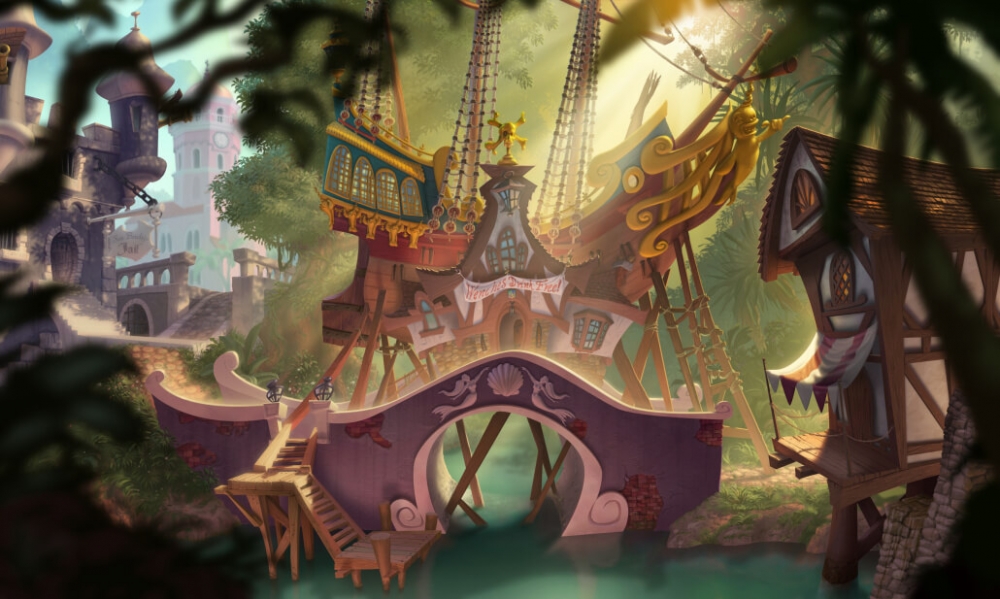 Interestingly, Tiller has been very up front that the game will be relatively short. We can expect around 2 to 4 hours of gameplay (with 9 to 12 different locations;) this is around one-eighth the size of The Curse of Monkey Island. At this stage, there won’t be any future episodes – what you see is what you get. Although I would love an epic 20 hour adventure, I have faith that Tiller will craft an exciting and fulfilling game.

Expectations are riding as high as the tide on the Duke. And why shouldn't they? With a legend like Tiller at the helm, we've come to expect some great quality and incredibly rich games. It may not be Monkey Island, but I'm excited to explore my masculine side with Duke Grabowski. Check out the gameplay trailer below.

Duke Grabowski is set to launch on PC, Mac, Linux and Ouya in October 2015. If you want to find out more information on the game, including some behind-the-scenes interviews and cool concept art, check out Venture Moon Industries’ website, Kickstarter page and Steam Greenlight page.

Finally, be sure to read our Top 10 Pirate Games of All Time.