Can Ronin sneak out from behind Gunpoint's 2D stealth-based ninja strategy shadow and surprise throw it out a window. 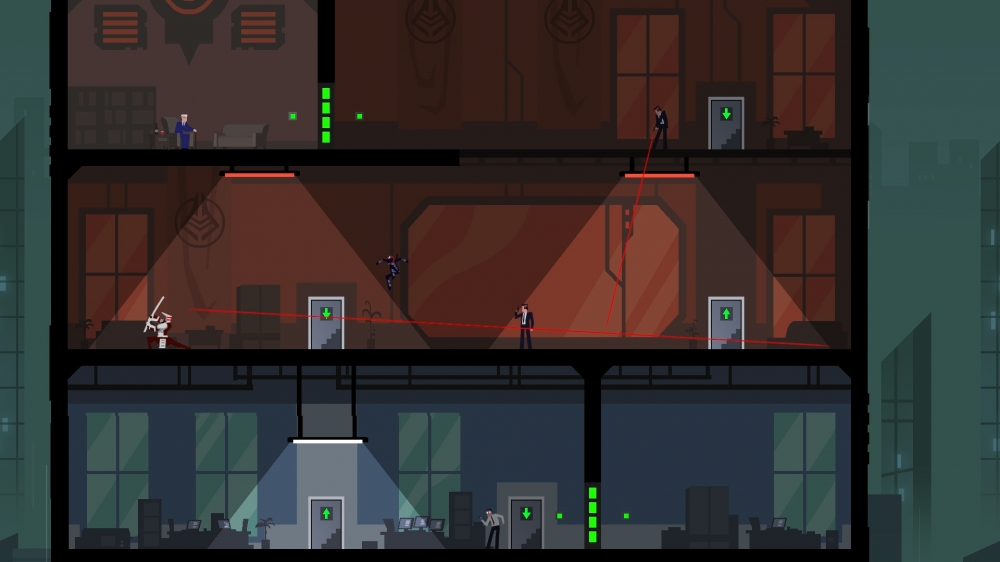 Initially, Ronin reminded me of Gunpoint, the 2D, noir, sprite-based, stealth hacking game from 2013. Yet different people, with very different intentions, made these games. Ronin may also be 2D, sprite-based and feature noir leanings, but it focuses on assassinations and sneaky ninja antics, rather than spies and hacking. Where Gunpoint had you avoiding combat where possible and working in multiple layers with stealth and hacking, Ronin makes the combat the centre point and adds layers to it with larger levels, more enemies and a laundry list of ninja abilities including holograms, shuriken, teleports and grappling hooks.

I did struggle at first to differentiate my feelings for Gunpoint from my experience of Ronin. I loved Gunpoint, and somehow took the similarities in control schemes, jumping mechanics and aesthetic with some offense. That is until I played past the first level and first saw the over-the-top way that Yakuza thugs spurt blood like pixel piñatas. Ronin is actually a whole different beast. Because Gunpoint never made me laugh with evil genius glee when I sliced down that last suited Mafioso. And Gunpoint also never made me throw my keyboard to the floor in frustration after nineteen attempts at a room.

You'll see the similarities straightaway, too. You begin a level, scope out the two-dimensional, multistory building, then plot out enemy placements and entry points. Is it better to go in through the front door and tackle the one guard? Or in through the skylight? However, once inside the building, Ronin really shows its own unique colours – and in particular, the colour red.

Ronin spends a lot less time with its stealth puzzling than it does its wholesale slaughter. When an enemy sees you, the game gets hard - it slips into a pseudo turn-based affair, where both you and your enemy move at the same time. In this mode you can plan your movement as long as you like, but know that when you do play, all of those little red laser sights crisscrossing the map will fill with bullets and you need to be alive when it has run ts course.

Sadly, while in normal gameplay you move with WASD and left click guides your jump trajectory, in the turn-based mode you are restricted to just the jump mechanic. This really rubbed me the wrong way: I understand that limiting the movement is designed to create a puzzle element to each of the combat encounters, but I found it way too restrictive.

This was never more evident than in a turn that ended while I was in mid-air just above an enemy unit, too far for the killing blow. In moments like this you know that skipping the turn will cause you to drop on the guy, but not kill him, while trying to move somewhere else will get you killed. I longed to be able to move freely and pause the combat whenever I liked, as you can when outside of combat. Admittedly this would allow you to run and slash through the levels, but I feel as though the players Ronin is looking to attract - the tactical planners - don’t need such artificial limitation forcing them to pause. These players would be doing it of their own accord. 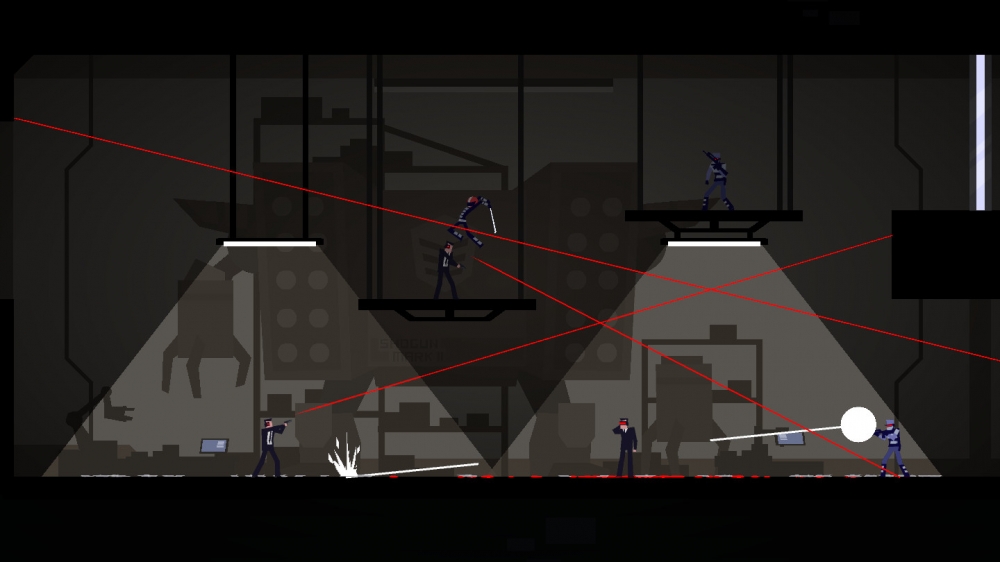 Yes the devil is in the details with Ronin, and unfortunately the details are where the game falls short. I would have loved a stronger focus on the stealth mechanics. When I came into this game I wanted a stealth banquet where I could avoid patrolling guards and stab any that got in my way. Unfortunately I find that setting foot over the threshold of a room often turns any nearby enemies against you. As a result, some levels become a hard slog of “how does the developer want me to beat this?” as every other attempt led to a messy death.

As the game progresses, more options open via the skill tree, as do new abilities such as being able to throw your sword or grapple enemies from the ceiling a la Batman. Being able to teleport into an unwitting guard and hurl him out of a window is fantastic, but as one of the last unlocked abilities, it feels like it comes after you’ve been through a lot of repetitious encounters that would have enjoyed the variety it offers. Indeed, the slow rate at which new abilities appear may see some gamers turn off during early levels where your best weapons are your sword and trial and error.

Speaking of trial and error, a save function would be lovely. There is a checkpoint system, but it only works when key objectives have been reached. And when you try over and over again to knock down one robo-samurai, it would be nice to save the game knowing that you can bounce back and retry it if required.

Yes, I have had some issues with Ronin, but I’ve still had fun. Enjoyable and frustrating this game may be, when all is said and done, there isn’t anything quite as satisfying as surprise tossing a thug out of a tenth story window and watching him sail into the darkness.