It might be early days yet, but this robotic fighter could be the game that finally nails the balance between accessibility and depth. 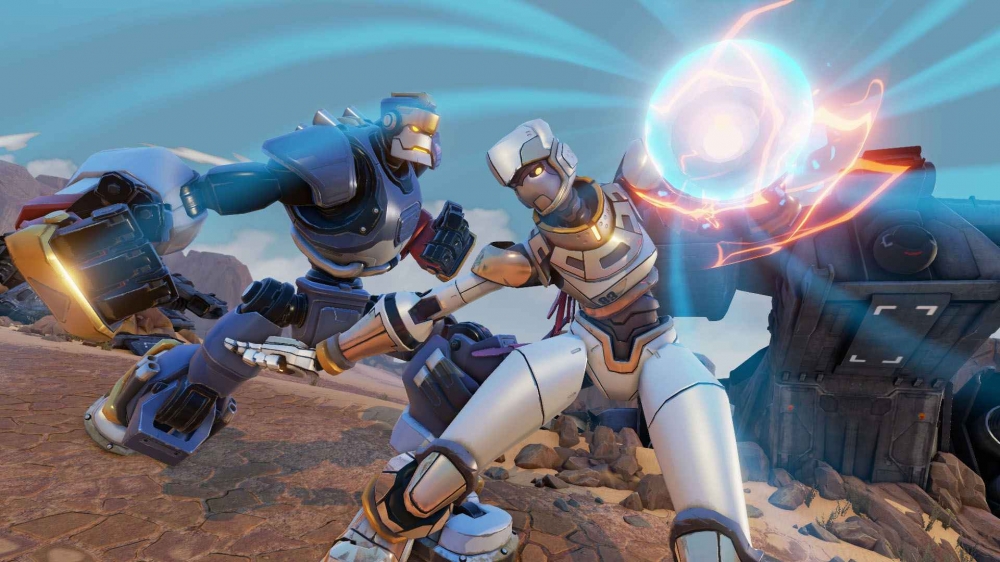 I don't play fighting games. I've tried, but I've just never been able to master the digital manipulation necessary to pull off all those flashy fireballs and devastating dragon punches. I know I'm not alone in this, yet the popularity of fighting games would suggest that I am. Unlike most other genres, fighting games have maintained an assiduous focus on precision play and plenty of practice in the face of a greater industry shift towards broader appeal and accessibility.

Outside of a few exceptions like Super Smash Bros. and Divekick, the majority of contenders favour complex combos and deeply-ingrained muscle memory over pick-up playability. For players happy to invest the hundreds of hours required to join the ranks of the genre's elite, there are plenty of options to sate their appetite. But for those seeking a more approachable experience, the choices are slim to none.

This hasn't bothered me in the past. There are always going to be certain types of experiences that I don't mesh with, for one reason or another. But recently, with the eSports scene growing enough to warrant mention on ESPN, and fighting game tournaments like EVO amassing prize pools of hundreds of thousands of dollars, I've started to feel like I'm missing out on something important. 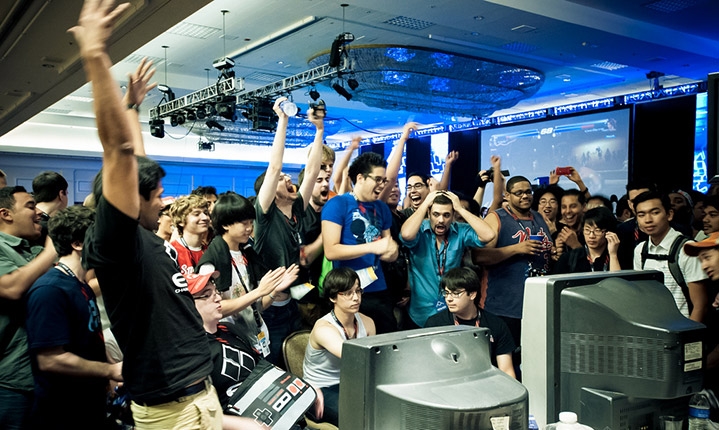 Determined to share in the excitement surrounding the seminal tournament, I've tried watching the title bouts, parsing the rapid-fire commentary and replaying the highlight reels in an attempt to understand the fervour behind it all. My efforts have been futile. Aside from marvelling at the visual bombast and wondering how the commentators manage to sustain their frenetic energy levels, the matches are essentially incomprehensible. With only a tepid understanding of the framework underlying the action, it's all just flashy chaos. Critical moves and contentious match-ups go right over my head, failing to suck me in. Even as wild cheering erupts in the wake of a KO, I'm left scratching my head and trying to figure out who it was that actually won.

This is all on me, of course. If I really dedicated myself to learning the language of the genre and studying the strategies involved in high-level play, I'm sure I'd be able to properly appreciate the talent and tactics on display. But I only have so much free time, and devoting so much of it to video game homework doesn't sound particularly appealing.

Enter Rising Thunder. With names like Seth Killian - the former community manager at Capcom and one of the biggest Street Fighter commentators in the scene - and the Canon brothers - the co-founders of EVO - attached to it, I immediately assumed the PC-only fighting game would be yet another esoteric entity I would never understand. The game may feature giant robots pummelling the bolts out of each other, but it's still a fighting game. It must be all about memorising convoluted combos and training fastidiously with a single character until you can pull off every move in your sleep, right?

I couldn't have been more wrong. Despite the pedigree, Rising Thunder takes a decidedly fresh approach to the fighting game genre. By focusing on streamlining much of the mechanical complexity inherent in its contemporaries, the game discards tome-sized move lists for a more refined repertoire of attacks, performed not by hammering out back, back, quarter circle, punch in quick succession, but rather through dedicated special buttons operating on cooldown timers to offset their power.

Simply hitting a single key on the keyboard will unleash a hurricane kick, or a diving charge, or a blazing fireball. These specials can be switched out and tweaked in various ways for those players wanting to dig deeper, but for everyone else, they need only familiarise themselves with a handful of techniques in order to be competitive.

This changes the game entirely. Victory becomes a case of smart move selection and mental alacrity, rather than twitch reactions and manual dexterity. From a competitive perspective, this opens things up to a much larger and less elite pool of players. Fans of the genre deterred by the impenetrability of the traditional scene can find in Rising Thunder a more level playing field, one that takes place more in the minds of combatants than between their digits. As Divekick proved with its titular two-move battle system, complexity is not the same thing as depth. Rising Thunder gets this, lowering the barrier to entry without "dumbing down" its core challenge. Put plainly: it's not simple, it's understandable.

In emphasising a purer style of play, Rising Thunder doesn't only entice new players. For me, the ability to passively comprehend the game is just as appealing. After watching just a few matches of Rising Thunder's technical alpha, I already feel a much greater understanding and empathy for the bouts than I ever have for Tekken or Street Fighter.

When one player scores a critical hit on the other, I can immediately grasp its importance. I know how precious the special moves are, and I'm aware that the striking player is now unable to perform that same move again for a set chunk of time. I can ponder the implications of expending that particular move in the current situation, and speculate on the player's intent in choosing it. Similarly, I can postulate on how the other player could use the denial to their advantage. All this with no need for me to have even played the game at all. The flow of matches is inferable without having to deep dive into the details. 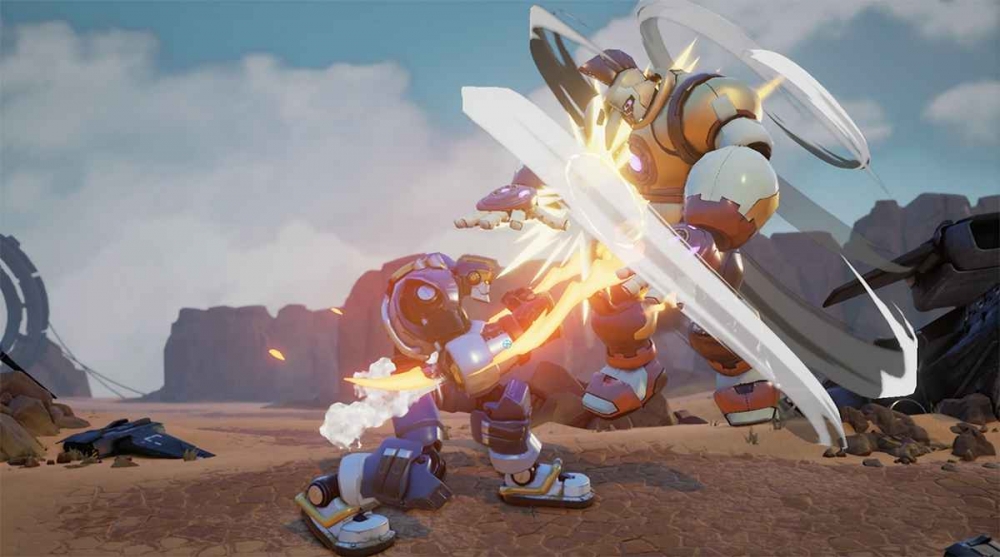 This readability extends to the visual style. Hits are heavy, with the clang of clashing metal and the flash of fire and smoke coupling with that slight pause at the moment of contact to add punch to every impact. Character movement and the swinging of limbs are appropriately exaggerated for bulky robots, ensuring painful winces whenever a combatant is sent flying across the screen. Visual indicators are clean and easily decipherable in a way I really appreciate. Blocks are clearly pronounced, and information like the maximum number of juggle hits - strikes that knock the other player into the air so they can't fight back - a player can score in one combo is displayed outright on screen. Most fighting games hide this kind of feedback behind the scenes, but in exposing it, Rising Thunder increases its clarity without sacrificing its depth.

Rising Thunder adopts a free-to-play framework for its payment model, a decision I found a little peculiar at first. But the more I thought about it, the more it made sense in terms of the game's overarching ethos. You can't get much more accessible than free, and with all purchasable items being purely cosmetic, the playing field cannot be upset by competitors with bigger wallets. And with such a broad base of potential players, cosmetic diversity is a smart incentive that preserves the game's integrity while encouraging individuality.

I really hope Rising Thunder takes off. I'd love to see it at EVO in coming years, giving noobs like me a game in which we can confidently follow what's going on. Heck, maybe I'll even give it a go myself. It's got giant robots kicking the screws out of each other. What else does it need?