Late last month we previewed Australian Indie FRAMED and interviewed developer Loveshack Entertainment for our PAX AUS special edition of Grab It. Ever since FRAMED first showed its handsome face, Loveshack Entertainment has been racking up accolades from big events like Indiecade, SXSW and IGF China. And throughout its launch week FRAMED has well and truly fulfilled the glowing promise it showed before release. If by some bizarre chance this fantastic noir puzzler hasn’t popped up on your radar, then one man’s opinion might be enough to put you on high alert.

Metal Gear’s much-loved creator, Hideo Kojima, has announced via twitter that FRAMED is his 2014 game of the year.

While this is all very exciting for the deserving indie developer, it comes as no surprise that Kojima is a fan. Kojima is a stickler for storytelling and a committed cinephile, and FRAMED features a very unique gameplay focus that is complimented by sleek animations, a magnificently executed soundtrack and an engaging narrative – it’s very natural that the father of Solid Snake would be attracted to this title, much to the disbelief of the humble developers at Loveshack. 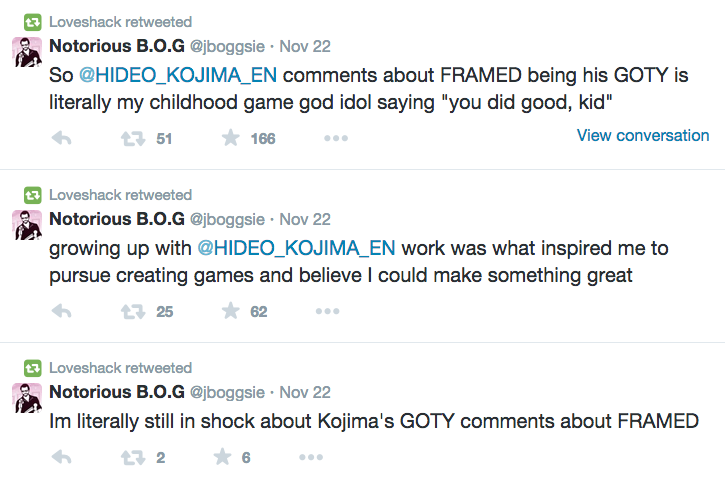 What I found most lovely about this interaction between a famed video game veteran and a hardworking Australian independent is that this has nothing to do with "celebrity endorsement." Kojima, an inspiration for Loveshacker, Joshua Boggs, just happened upon this intriguing title on the app store and enjoyed it so much that he had to share it with the rest of the world. What a rewarding payoff for one of Australia’s most promising developers.