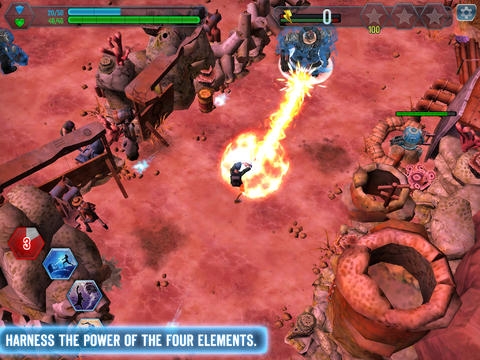 Linkin Park are certainly no strangers to the gaming scene. As part of the band’s ‘Recharge’ universe, in September 2013 the group released the free-to-play action puzzler, LP Recharge, as a Facebook-only title. The group followed up the game with their remix album Recharged in October 2013. Over half a year later and the band still isn’t done with this universe. Joining other well known artists like Radiohead (Polyfauna), Bjork (Biophilia) and UNKLE founder James Lavelle (God of Light), Linkin Park has branched out into the iOS space with their 3D action game, LP Recharge – Wastelands.

Sounding like it could be the plot for a half-decent action movie, Recharge Wastelands is set in the distant future; the Earth is a barren wasteland, ruled by a race of hostile synthetic creatures known as the Hybrids. You control the band members of Linkin Park as they make a last stand against the might of the Hybrids.

After playing Recharge Wastelands for some time, I walked away suitably impressed. Wastelands doesn’t feel like it is simply an excuse for Linkin Park to slap their name on the game. Instead, their experience with LP Recharge (the Facebook game) seems to have made all the difference, with Wastelands coming off as quite a fun title.

Players control the Linkin park bank members as they fight hordes of Hybrids across 50 stages. Each level has a variety of standard objectives like rescuing other humans and collecting loot. The gameplay is quite straightforward, with players only needing to tap or swipe the screen to move. Combat is likewise simplistic. Players are endowed with a variety of elemental powers (fire, water, air, earth) - and no, it's nothing like Captain Planet - all of which come in handy depending on the type of Hybrid you come up against. Wastelands has a vibe very similar to that of Second Chance Heroes, which itself is an incredibly fun and chaotic action game.

Let’s not forget about the band though. As you progress through each stage, you gradually unlock songs from the new Linkin Park album. Talk about some pretty decent background music.

Overall, I'm really enjoying my time with LP Recharge - Wastelands. I went in with somewhat low expectations, thinking it might simply be an excuse for Linkin Park to slap their brand on a medicore game. But the result, at least so far, couldn't have been further from the truth. Should I have ever doubted Linkin Park? Be sure to pick up the game yourself (grab it here) and make up your own mind. If you want my humble opinion, also go pick up the band's best album, Hybrid Theory (grab it here).

Also, if you're into your music and your gaming, you'll love Episode 4 of Grab It, which is musically themed. Not only do we have an in-depth interview with indie composer Nathaniel Chambers, but we feature the Top 10 Musically-Driven Games on iPad. 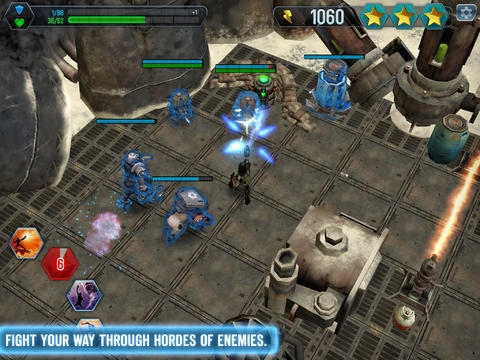