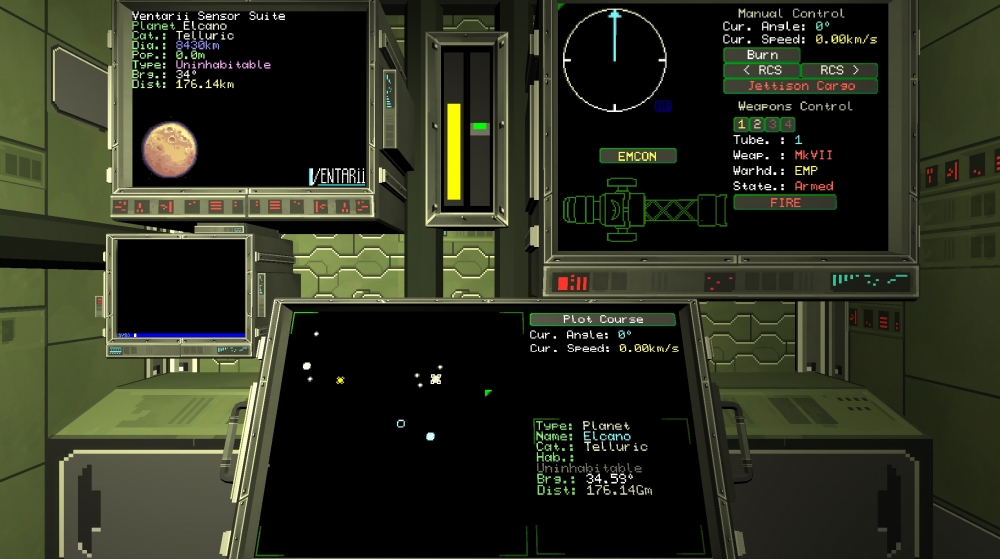 In the few shorts years since the Harris brothers – Leigh and Rohan – founded Flat Earth Games, the little indie developer has made quite an impact. Its first title, Towncraft, was a city-building title that plugged into gamers’ libraries somewhere between Animal Crossing and Minecraft. Follow-up Metrocide was a brilliant and brutally challenging top-down stealth gem that recalled Blade Runner meets GTA. Then the studio mixed it up with classic, old-school arcade blow ‘em up bloodbath Super Death Fortress.

Next up is another new direction; Objects in Space is a Han Solo sim of sorts, with you playing the role of captain in a single-seat ship out in the Apollo star cluster, wheeling and dealing with all sorts. With no view-port, the game is more submarine than Millennium Falcon. You’ll be playing the numbers game, pouring over data to keep all you systems running properly, watching scanners for signs of useful loot, and then making the trades without getting shutdown or caught by pirates, the mafia, corrupt governments and shady police.

The game will feature a number of unique explorations into game development that make it well worth keeping an eye on. For starters, gamers who like to tinker will be able to build their own hardware that can be used to control the game. The image below shows what this may end up looking like.

In addition, the narrative will unfold in a bizarre, yet exciting fashion, that will see it expand across 12 different systems in an ad hoc fashion. We’ll let the developer explain:

“The game's seven writers will each be tasked with writing one short, interactive story for the player to engage in which will be playable at the beginning of the game. Rohan and Leigh Harris, the game's lead programmer and designer respectively, will then reveal the next key plot points to them for each of the 12 star systems in the game. When the writers reconvene to write their next stories, any plot points which have affected their ongoing characters must be taken into account. In this way, we hope to see the game's narrative unfold naturally and have the same uncontrollable nature that stories in real life hold.”

“The writers were chosen to represent a variety of different styles. While there is one experienced games writer (Daniel McMahon - L.A. Noire), the team also includes writers from theatre, screen, copywriting, MUSHes and pen & paper RPG writing. The idea is that the Apollo cluster will feel very different depending on which star system you're in. Not only will the news you read be vastly different, slanting your view on other star systems' politics, but you'll also be hearing different voices telling you stories within those systems."

"While there are many things to do in the game, Objects in Space will not feature a 'main quest' line. Instead, it allows the player to focus on exploring, profiting and surviving at their leisure. The story of the Apollo cluster is one which the player can be deeply involved in, or only give a cursory glance to. There are huge advantages to knowing a lot about the game world, but for those who just want to experience the mechanics of the game, there is nothing forcing you into its narrative elements."

For these reasons, Flat Earth Games attracted the attention of ScreenNSW, who – it was revealed today – will provide $25,000 from its Production Finance program to bring on the game’s development. It is set to release on PC, Mac and Linux some time in 2016.

In the interim, pick up the studio's other games:
- Super Death Force
- Towncraft
- Metrocide