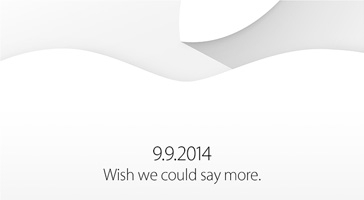 Happy Monday! Get ready, this week is set to be a big one for watchers of iOS news. At the time of writing the clock on Apple's site says there's one day, eighteen hours, fifty-six minutes and four seconds to go until the big reveal.

Living on the east coast of Australia can make for some late nights or early mornings if you want to write about games. Everything is of course always happening in time zones at the opposite end of my sleep cycle. On June 2 I awoke at 3am to watch Apple's WWDC announcement live, and on a chilly Thursday morning in July I awoke at 2am to phone Dallas, Texas to interview to Jeremy Snead, director of gaming documentary Video Games: The Movie.

Well our alarms are set once again for 3am on the 10th September to watch what we're all expecting to be the iPhone 6 announcement. Finally we'll be able to put all the rumours to bed.

If those rumours about a bigger screen are true, this is obviously a good thing for iPhone gaming. It would be interesting to see if that would cannibalise the iPad Mini sales though. I'm sure Apple have thought that through and weighed up the pros, cons, risks and rewards. The company seems to know what it's doing.

What's under the hood of the iPhone 6 will play an even bigger part in the future of iOS gaming though. No doubt it will also see the release of iOS 8, with its new programming language Swift, and the developer API Metal, allowing greater access to the grunt of the A7 powerhouse. In the WWDC announcement we saw these things combine to run console title Plants vs Zombies: Garden Warfare on an iPad, promising a very exciting future for iOS gaming indeed. Even on current tech you can play BioShock!

What will be the game used to showcase the iPhone 6 reveal? A new Infinity Blade or Real Racing? Or a bold new IP kept under wraps until now, hoping to leave our jaws on the floor come September 9? And with iOS 8's Extensibility and Handoff features, allowing seamless continuation of work between Apple hardware, when will we see the Apple TV brought into the bigger picture?

The other big rumour is of course expected to be the iWatch reveal. Word on the street is that the iWatch will have a large health focus. With that in mind I'm guessing if there is an iWatch, then gaming on your iWatch could involve lots of simple brain teasers, maths and word puzzles. Rest your body, exercise your mind.

Apple's tagline for the upcoming event is "We Wish We Could Say More." Is this a reference to a new and improved Siri or will the iWatch actually be more of a phone than a watch? We could finally be living in the the sci-fi future of speaking into your wrist watch to communicate with the world, with maybe a small earpiece detaching from the watch to enable this experience.

What will be will be, but whatever happens, one thing is for sure. I don't expect to get much sleep on September 9.