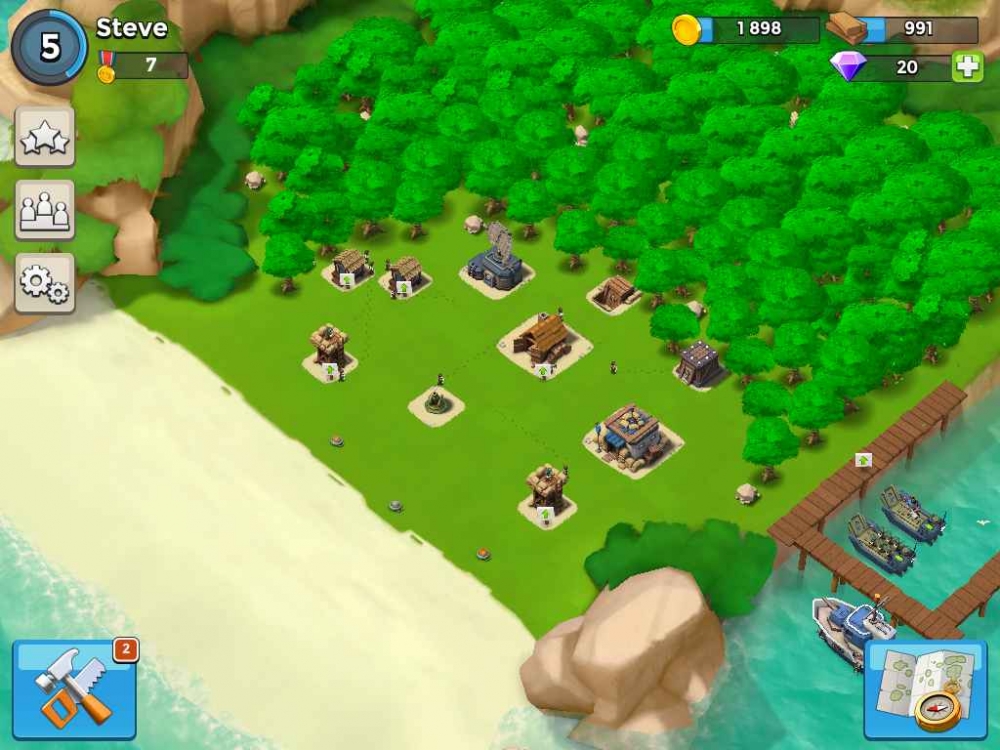 Finnish developer Supercell electrified the gaming world in 2012 with a small title you may have heard of – Clash of Clans. The insanely addictive strategy title captured the imaginations (and wallets) of thousands of armchair generals. Riding on this wave of success, Supercell has launched another assault on our free time with combat strategy title Boom Beach. Despite inevitable comparisons with Clash of Clans, Boom Beach establishes its own beachhead, giving armchair generals an excellent reason to take up arms once again.

Boom Beach is easy game to pick up, strolling down the well-worn path of many other strategy titles - collect resources; build a base; raid enemy base; rinse and repeat. In Boom Beach, you build up a base of operations on a lush, tropical island. Unfortunately, the prospect of piña coladas at sunset and limbo competitions is shattered by the presence of pesky pirates. After hastily erecting some basic structures and building up a sizeable expeditionary force, you can raid nearby islands for resources and to rescue villagers.

Similar to Clash of Clans, Boom Beach is incredibly addictive, made possible by the always-online multiplayer component. While it’s fun and rewarding to take out enemy AI fortifications, nothing can substitute for the unpredictability and ingenuity of human players. After cutting my teeth on a number of “noob” AI enemy strongholds, my confidence was riding as high as the waves lapping at my troop transport. Before logging out of my first session, I haphazardly threw down a few defensive structures, figuring that would be more than suitable. Logging back on a few hours later, my village had been razed to the ground three times by human players.

This is where Boom Beach is at its best. It may be frustrating to lose a significant stockpile of resources to other players, but it forced me to reconsider my entire strategy and plan ahead, especially during the times where I would be logged out. The constantly evolving strategies and cunningness of other players will suit armchair generals very nicely.

The main issue I had with Boom Beach is its not-too-subtle predilection for IAPs. Similar to games like The Simspons Tapped Out and Star Wars: Tiny Death Star, Boom Beach revolves around time management. Building structures, troop deployment and upgrades can take several hours, unless you’re willing to fork over cold hard cash to speed up the process. It’s at this point Boom Beach becomes a chore to be ticked off every few hours. These “chore like” tasks can be masked well if the source material is engaging. However, a game like Boom Beach doesn’t have the same wealth of material to draw from as The Simpsons or Star Wars, and so the monotony of waiting for the timer to reach zero is harshly felt.

Those wanting a solid multiplayer strategy title will find much to like in Boom Beach. Being pitted against other human players means you can never rest easy. Be warned though, if you’re not willing to throw down a few dollars – as in, pay for the game rather than consider it a freebie - you’ll be spending many hours in between build times twiddling your thumbs.

Verdict: Boom Beach is an excellent follow up to Supercell’s hugely successful Clash of Clans and is at its best when you’re up against other human players - their constantly evolving strategies create uncertainty around every beachhead. The IAPs border on intrusive, but do not ultimately bring down a game that is otherwise thoroughly engaging and addictive.