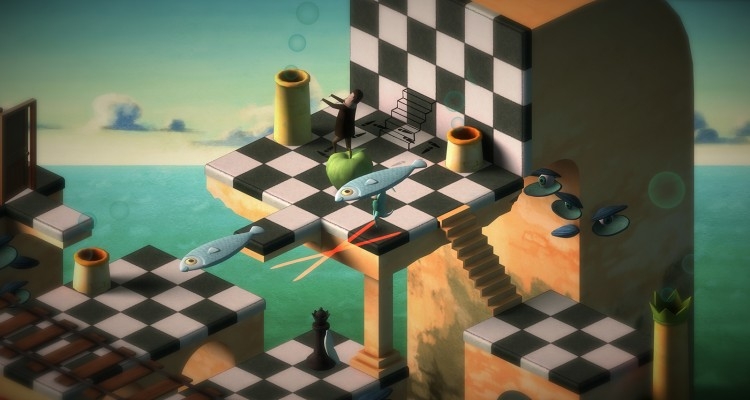 I used to sleep walk, I'd wake up in the kitchen on the floor, or standing outside in the garden. Nowadays I sometimes have conversations with my girlfriend or the dogs in my sleep; the usual stuff really, kindly letting them know that I'm being chased by a duck with six legs. That sort of thing.

But Bob has an entirely unique set of issues, he can't sleep without falling off a roof or being pursued by clocks with legs.

Back To Bed is an exploration into the absurd. Bob sleepwalks, and you as his dog need to coerce him back to the safety of his pillows and sheets. Without the narcoleptic nincompoop sauntering from the edge of a building.

You do this by redirecting Bob. As his dog you move and place oversized apples in his way, which will make him turn - though he only every turns clockwise. This leads to some entertaining gameplay as Bob turns clockwise and the enemy alarm clocks turn Bob-wise. These simple mechanics lead to some frantic situations as once he starts moving, Bob will not stop unless he steps over the edge. Later levels find you running frantically from one side to the other desperately trying to plant apples in his path before he falls. These “time pressure” levels are easily where the game shines.

You control the player character by pressing and holding in a direction to move that way, tap to pick up objects and again to drop them. It can be a bit unwieldy at times, especially in larger levels. But it doesn't stop the levels being fun.

The levels all take place on rooftops, balconies, train platforms and the like, all dangerous places to be sleepwalking. They're also artfully decorated with elements of Bob’s real life, such as flying chess pieces, chimneys and window awnings. The scenes are completed with eyeballs staring at you from any opening and floating in the sky above Bob’s blissfully unaware head. The eyes are a little disconcerting, but give an interesting view into Bobs own psyche, as these are surely the people who stare at him because of his narcolepsy.

Throughout the world narrative elements pepper the background. They are carefully placed throughout the environments in a dreamlike way, written in clouds or crammed onto chalkboards. The story blends seamlessly with the in game elements and creates a great sense of flow from one level to the next.

After completing the basic set of levels, you unlock a secondary Nightmare Mode, which adds the challenge of collecting a key before exiting the level. While this may not seem like much of a twist it essentially doubles the difficulty of any level by making you cross it to get the key, then head back a different way to reach the bed. It certainly puts a fresh spin on the levels you have completed already.

In its broader scope, Back to Bed is an interesting exploration into the issues of living with disability. Beginning with the ever watchful eyes of society it is a unique look into a world completely different to ours, though Bob may occupy the same space, our reality only informs his, and he makes his own world around it. It's best defined as magical realism, which has its roots in 19th century literature such as Lewis Carroll's adventures of Alice, and other writers into the 19 hundreds. As far back as then it is a style best used to explore real world issues through the guise of fantasy. It is, however, refreshing to see some attention paid to little covered issues such as narcolepsy.

Though this could be another instance of me reading too far into the game; I tend to do that.

I do have one beef with the load times. Back to Bed loads relatively quickly, but is a bit inconsistent in when it decides to place a load screen. When playing, if Bob falls over an edge, he respawns at the start and immediately moves again. However, if he bumps into an alarm clock, he wakes up and returns to the start, this time with a load in between.

Yet I’ve had a great time playing Back to Bed, just don't play before bedtime, all this talk of sleeping and not sleeping can keep you awake for hours.