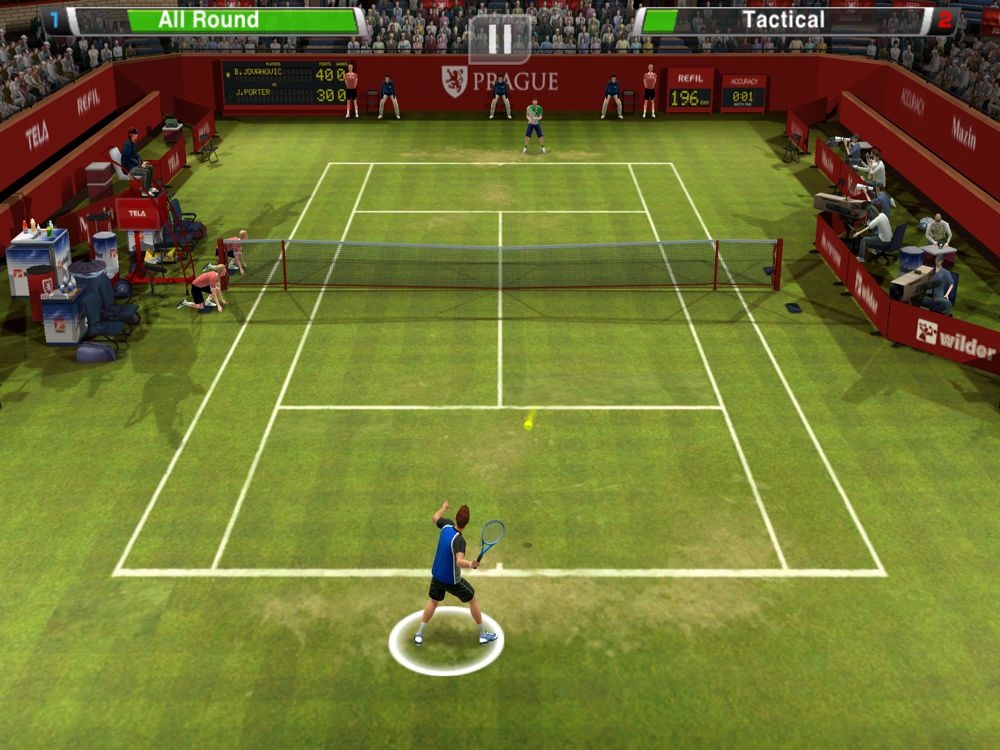 Anyone for tennis? Or better still, anyone up for watching the hard training millionaires strut their stuff on grass with freshly re-strung rackets, whilst the rest of us lazy punters park our butts on the couch and feed our faces with the traditional Wimbledon diet of champagne, strawberries and cream?

It's that time of year again - the absolute pinnacle of the tennis calendar - when players cast aside their colours and don traditional white attire for two weeks of play at the All England Lawn Tennis Club in Wimbledon, London. Who's the favourite for this year? Last year saw Marion Bartoli win her first ever slam, and then promptly retire. In the men's tournament we saw Andy Murray lift his second grand slam trophy having previously won the US Open in 2012. Personally I'd love to see Federer win one more slam before he calls it quits, but he has some tough competition.

If you're a fan of the sport, and an iOS gamer, you've come to right place. We thought why not take a look at Wimbledon through the lens of iOS, and so we've put together an overview of three of the best tennis games available in the App Store. You're going to need something to play during the rain delays and between matches right? Right.

The best place to start is to download the official app - The Championships, Wimbledon 2014 for iPad - which you can grab for free right here It's nicely put together and will give you access to all sorts of goodies such as live scores, results, draws, player profiles, live blogs, news, radio and videos.

Ok, onto the main event. Read the blurbs, watch the trailers, and then smash the links to grab the games.

Stick Tennis (Stick Sports Ltd)
Stick Tennis is great for a casual pick-up-and-play diversion. Rather than having to worry about controlling the player, you'll simply swipe in the appropriate direction and angle you wish the ball to go. Casual it might be, but there is still some depth to be found - and skill to be learned - in outplaying your opponent. You can find some nice angles, and even perform drop shots by swiping back towards your own player.

The cartoon graphics are smooth and pleasingly animated, and hide a surprisingly sophisticated package underneath. The free download will get you access to all four slams, daily challenges, casual matches and loads of unlockable players. Extra content is available through in-app-purchases, including a World Domination tournament.

This is an easy recommendation when it comes to passing some casual time, and yet it still manages to bring some tactical gameplay to the court. Check out the video and grab the game now.

Table Tennis Touch (Yakuto Limited)
Sure it's not strictly a tennis game, but when you are swiping on a touchscreen the difference is merely a name, and there is a whole lot to like in Table Tennis Touch.

Rather than requiring an always on the screen finger to drag your bat around, you'll instead swipe directionally to strike the ball back towards the AI. This sounds similar to the control scheme of Stick Tennis, but it is much less casual. You'll need to accurately swipe where the ball actually is in TTT, rather than just anywhere directionally. The speed of your swipes effects the strength of your shot, and spin can be added with a lateral swipe at the end of your shot, bringing good tactical depth to the gameplay.

Fun minigames help temper the learning curve and train you in the table tennis arts, and near photorealistic backgrounds, stunning sound effects, and loads of unlockables and tournaments tie together a high quality keeper for your sports folder.

Table Tennis Touch is showcased in Episode 5 of Grab It - The Game Discovery App, out on June 26, where we feature a full review and interview with developer Yakuto Limited. In the interim, check out Episode 4, or grab the game below.
Grab It Now

Virtua Tennis Challenge (SEGA)
Sega's Virtua Tennis has made its way from consoles to iOS in impressive form, bringing a great comprehensive arcade tennis experience to iPads and iPhones.

Unlike Stick Tennis, Virtua Tennis Challenge actually allows control of the player's avatar, allowing you to choose your own style of play and model yourself on your real-world tennis idols. Rally it out from the baseline in the style of Rafa, or play more old-school serve and volley like the greats of the past, such as Stefan Edberg.

There is also shot selection aplenty, with top spin and back spin options, drop shots and slice shots all filling out your arsenal. It can be daunting at first performing all this on a touchscreen, but the tutorial gives you a solid grounding to learn these various skills and to bring them all together. There are virtual d-pad control options, too, but I prefer the touchscreen controls, which I find a more natural fit for the platform.

All four surfaces are available to play on, with the ball reacting accordingly whether you are battling on clay, grass or the harder surfaces. Training modes, quick matches and full tournaments are all included, as is multiplayer over Wi-Fi and Bluetooth. The end result is a really satisfying tennis experience, brought thoughtfully to the touchscreen. You can grab the game right here, and check out the trailer below.

Ok, so that's game, set, and match for now. Enjoy the tournament and happy gaming!