In this commercial world of data collecting, free-to-play, ad-support, and in-app-purchases, we take a subversive and psychedelic trip into virtual reality. 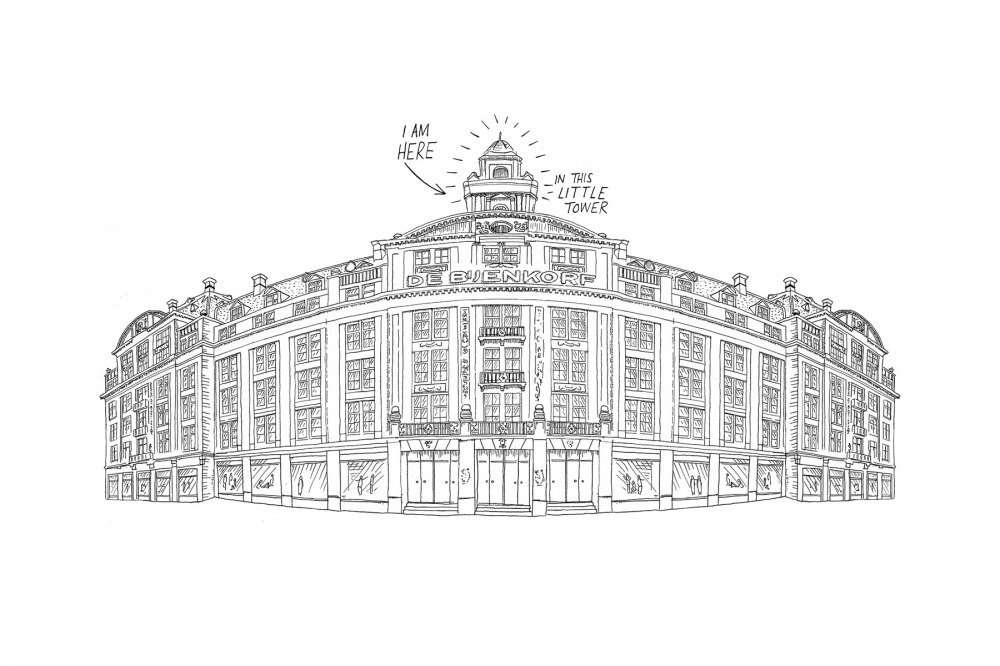 My virtual self sits in a room that can only be described as sparse. Sparse not just for its simple and minimal furnishings, but for its very creation - a black and white, hand-drawn, pencil-on-paper rendering of a room with few distractions. A warm and calming voice coaxes me to relax and take some time to just look around, easing me into what is my first VR experience.

The room is not large but it feels spacious due to both its lack of clutter, and its large open windows looking down onto active streets below. I follow the instructions from the friendly voice narrating in my headphones and look around at the table, chair, bed, coffee machine, and other simple, homely features. Without consciously realising it at the time, I'm already relaxing and surrendering to that "presence" I've read so much about in the last few years - the virtual reality parlance used to describe our minds and bodies being successfully convinced we are somewhere we are not.

This virtual room is a stylised version of one that exists in the real world - the Room On the Roof - an artist space atop the de Bijenkorf department store in Amsterdam. In an effort to elevate the act of shopping beyond that of a mere consumerist pleasure, and create a more premium experience, this Dutch department store invites artists to spend time in its tower room to create works of art shoppers can later view. It's a nice idea - infusing the shopper's urge with a touch of artistic creation, with each side benefiting by gaining a small foothold in the other's world.

Drawing Room is the result of Jan Rothuizen's residency in Room On the Roof, and it's eight and a half minutes I won't soon, if ever, forget.

The John, Palmer, and Mark Show

In reality I'm sitting in a cubicle in the Adelaide State Library, where half a dozen Oculus Rift units are showing different experiences as part of the Digital Playground installation - just one small part of the city's annual celebration of the arts, the Adelaide Fringe Festival. I'd been itching to try out the Oculus ever since watching tech guru John Carmack's 2012 Quakecon keynote, in which he excitedly explained how technology was finally at a point where virtual reality was a viable possibility, despite many technical hurdles that still needed to be overcome. Watching that three and a half hour keynote in 2012, my mind swam in boyhood sci-fi fantasies as Carmack outlined plans of working with Oculus inventor Palmer Luckey to bring virtual reality to the consumer market.

2014 then saw the acquisition of Oculus by Facebook’s Mark Zuckerberg for a cool $2 billion, giving Carmack and Luckey the funds to overcome any remaining obstacles, and fast tracking the device towards the end goal of a consumer product. These historical bullet points finally carried me to where I now sat in the Adelaide State Library, inhabiting cyberspace for the first time in February 2016, with the Oculus just weeks away from hitting shelves in March.

My virtual self continues to grow more comfortable in my virtual space. Looking out the window to my left and down to the street, the artist's voice in my headphones points out a dark, robed figure; a street performer who calls himself Death. At that moment a chill wind is heard passing through the room, and while of course I can't feel it, the sound effectively punctuates Drawing Room's first truly surreal moment.

It feels on the one hand superfluous to use the word surreal to describe a virtual reality experience. The whole digital environment I'm in is an artistic construct. My mind however, has accepted what I'm looking around at, and assumes that the normal rules of reality apply, despite the fact that everything I see is clearly pencil-drawn. Other than that though, I'm sitting in a chair, immobile, in a room that otherwise actually exists, with no artificial movement that my real-world self has to be convinced of. As a result, whenever something unnerving or unusual happens in this virtual world, my mind will react how it would in ours.

Through the Oculus I look at the easel in front of me and check out some of Rothuizen's sketches; simple outlines of smiling faces, unremarkable representations of mundane things. It's as if he isn't sure how to spend his time in the room, and his narration in my ears echoes the sentiment. The artist explains the department store's guidelines were for him to do as much or as little as he wants with his time in the tower. Even nothing. The experience I'm now having is evidence he did not choose the latter.

Drawing Room was created by a team of collaborators, but if it were to be likened to a film, Rothuizen would be its director, with his programmers and animators working his drawings, concept, and vision into the final VR experience. A true multi-media format, VR allows us to truly inhabit a work of art like never before, making physical installations at galleries seem clunky in comparison, as any impossibility can now be removed, and any artist’s vision realised, by simply donning a headset.

A small, typical storybook bird which was previously sitting on the windowsill takes flight into the room, and after a couple of laps around me, alights on the edge of the easel, tweeting vigorously at me, a joyous Disney moment brought to virtual life. In reality, I sit smiling in the State Library, chuckling audibly and un-self consciously, as the scene fades to black.

The societal changes virtual reality has the potential to usher in are diverse. Everything from online social gatherings, film, music concerts, video games, pornography, gambling, medical opportunities, design, education, and more all have the potential of being revolutionised by inhabiting a virtual space, coupled with the connectivity of the Internet.

As with any new technology there are fears. One doesn't need to be a medical practitioner to wonder about the effect prolonged and repeated sessions staring at screens millimetres from your eyes might have. And what effect will regularly masking ourselves off from the real world have on us socially and psychologically? Will the interactive experiences of video games in which we regularly shoot to kill have a greater potential for desensitisation than the current format of playing on a 2D screen, from which we have a certain distance and disconnection?

There are big questions that any new technology brings to the table that need to be discussed.

The tables have turned, as what was dark pencil on white paper is now reversed to depict night time. My ears are filled with tortured moaning and angry, alien screaming. Rothuizen describes once hearing a Dutch biologist's claims that birds lived ten times faster than humans, and that slowing down a songbird's singing shows them not to be singing at all, but merely yelling at each other. The romantic in me rejects this somewhat speculative bit of science, but the sounds of those altered bird calls in my ears are disturbing, putting me on edge.

With my mind now fully given over to presence, forgetting that the vision in my eyes is not that of reality, the impossible happens. The walls of my room raise up and are taken away to reveal the city outside, as if I am now on a roof. Gravity also abandons me, as the furnishings levitate, and the individual city lights rise to become stars. Looking completely around me up, down, forward and behind I am now floating in space, only the stars as they fly past have small tortured faces, and the yelling of the birds gives way to unintelligible human chanting and choral singing.

All of a sudden I can't breathe and I want out. It's too much, my mind is completely recoiling at the absolute absurdity and impossibility of what is happening. Closing my eyes for a couple of seconds in the hope of restoring some normality fails as the aural assault continues. I scrabble like a panicked drowner at the bottom of the Oculus headset and tilt it up to see my very real feet on the very real floor of the Adelaide State Library, and the relief is instant. I take a few deep breathes as the scene continues to play out on the monitor in my cubicle, and I realise what I'm missing out on. I want back in.

Once again calm, I drop the headset back in place to see out the experience and enjoy the closest I'll ever be (until no doubt a future VR moment) to being in outer space. Words float past, joining the stars/faces - "This is a Premium Experience" - reminding me of the department store's agenda, twisted into Rothuizen's subversive, dreamlike/nightmare version of it.

This scene also fades, and I'm back in the daytime version of the Room On The Roof, pencil on white paper, as the artist explains his residency is over and the experience comes to an end, leaving me wondering what the hell just happened. A clue might be in Rothuizen's parting comments, as he describes preparing to leave after his third cup of coffee, and I notice writing below the espresso machine explaining that it can be bought in the department store below.

Who is subverting whom here?

And maybe that will be the biggest question of all that we will ask of virtual reality - the next shopping frontier - as the Facebook-owned Oculus Rift launches as a consumer product in late March, 2016.