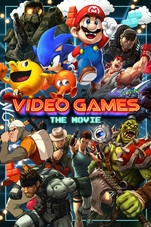 “Once upon a time, there did exist a world without video games.”

It must have been a daunting thing sitting in front of a blank page figuring out how to tell the story of video games in the space of a feature-length documentary. But what better place to start than at the beginning? The first words we hear, quoted above, does a great job of grabbing the viewer’s attention and forcing them to contemplate such a world. To plant the seed that this pastime of ours we now take for granted is still so young, and yet has come such a long way already, is the best possible way this film could have started.

Director and screenwriter, Jeremy Snead, has done an admirable job of taking us on a journey from the very birth of an entire medium to the present day, whilst covering most of the salient points along the way. From Spacewar and Pong in the 1970’s, to the Cloud and Oculus Rift of today, Snead spends the first half of the film taking us along a timeline from the start to the present, and the second half travelling back and forth to key points on that timeline to cover some of the bigger issues gaming has faced over the decades. This includes the fall of Atari and the infamous E.T landfill anecdote, the controversy of violence in gaming, and the maturing present-day acceptance of gaming culture.

From start to finish it is evident this is a movie for gamers, by gamers. A look at one of the executive producer credits reveals Cliff Bleszinski, formerly of Epic Games, which fosters credibility. The film is certainly an appreciation of video gaming, but it is not a patronising one, and some of the talking heads throughout are the industry’s biggest innovators and hitters, including Nolan Bushnell, Hideo Kojima, Peter Molyneux, Reggie Fils-Aime and Mark Cerny. This is no scrape the barrel for the B-list production.

Each talk quite passionately and thoughtfully about their respective topics, with some memorable quotes and philosophical nuggets that will stay with me for some time. When discussing the various skill sets that need to come together to craft a game, Cliff Bleszinski dubs the requirement “the Avengers of talent.” Another standout moment for me was Peter Molyneux discussing the issue of game violence, and pontificating on how, if one were to only focus on the horror genre of the film industry, what a ghastly industry it would seem. Whatever your thoughts on Molyneux’s past and present body of work, it is always worth listening to the man philosophise and ruminate over gaming’s many facets.

As much as I enjoyed the film and the way its great montages walk the fine line between nostalgia and appreciation admirably, I did feel there were some strange omissions. The focus on Nintendo is of course valid, but for SEGA to barely get a mention seems unfair. Also I found it odd that apart from a few offhand references to tablet gaming, iOS and the advent of touchscreen gaming isn’t covered. Given the seismic shift in the gaming landscape that iOS has brought with it, I was surprised by this. Having said that, the ground covered in 101 minutes is vast, and had Snead attempted to tackle any more than he did, the film might have outstayed its welcome.

Video Games: The Movie is a hard film for me to watch objectively, given my love of the subject matter, and I suspect many gamers will feel the same. But watching this film about our beloved hobby and the amazing culture it has created brings with it the realisation that gaming really has grown up and that we have an exciting journey ahead. Any gamers young, mature, casual, and core should definitely treat themselves to this detailed documentary, which goes deeper than gamers are used to seeing mainstream media go.

Be sure to stay for the end credits and some fun easter eggs.