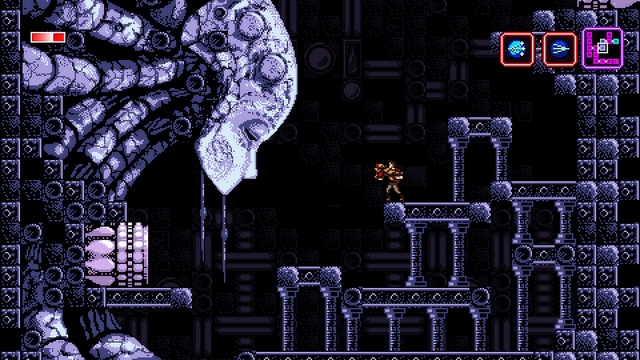 A love of all things metroidvania is being lavished on Axiom Verge. One of the game’s major hooks, which directly speaks to gaming's past, is that of intentional glitches that will manifest during gameplay. It's hoped this will conjure those magical moments of yesteryear's games, when for a fleeting moment you thought you had glimpsed behind the curtain into a world only thinly veiled by the game itself. Speaking on the PlayStation Blog, Happ describes it as such;

"...picture this: you have a full game that would be awesome on its own – your dream Metroid + Contra + Bionic Commando + Blaster Master or what have you – but then, what if in addition to that game, you were given the means to break past the edges of the world and see things beyond — things that weren’t and couldn’t have been designed for you to see?"

It's an intriguing concept, and it will be interesting to see how it gets fleshed out within the game as a mechanical device.

Judging from Let's Player Phawx's preview videos below, Axiom Verge is shaping up to be a game more than capable of standing on its own two feet, let alone the shoulders of giants. Released in three parts over the last few months, we’ve grouped them all together for your viewing pleasure. Of course if you'd rather go into the game spoiler free, that's completely understandable. I personally have only allowed myself a few seconds of viewing before deciding that I’d rather not see anymore until the full release, wanting as much as possible to play the game as an unspoiled experience.

Given that gameplay previews are now being released, I wouldn't expect we have too long to wait before Axiom Verge's full reveal, and after what must have been five long years for Tom Happ, his love letter will finally be available to be read by all.