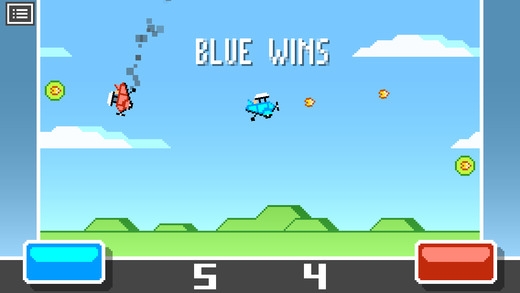 For its latest release, Donut Games has gone back more than thirty years in time for inspiration.

Gamers in their thirties and forties will remember Combat, a cartridge that came packaged in the box with the Atari 2600 console. Combat was an absolute  treasure trove containing tonnes of minigames that pitted two players against one another in competition. I remember my sister and I losing countless hours to it after school when we probably should have been doing homework.

Donut Games' Micro Battles seems to be a direct attempt to tap into that rich vein of fun that can only be had by two people gaming together in the same room, on the same screen.

There are four games in Micro Battles - a cowboy shootout, plane battle, axe throwing, and a mini football game. Each game simply has a blue button on the left and a red button on the right, with each player timing their attacks and the winner being the first to score five.

By the end of half a dozen games of the cowboy shootout and axe throwing - with my opponent being my wife - we were laughing and yelling hysterically and loudly. The great thing about these four games is that whilst there is some skill involved in timing your attacks, there is also an element of chance which helps even up the odds. For example, in the cowboy game, your bullet may hit one of many cacti placed between you and your opponent, which sends it careening and ricocheting off in unpredictable angles, so much so that it might actually come back to hit you. With luck being a third invisible player, it makes for some great comebacks and stops you from wanting to quit if you are against the wall at 4-1 down.

If you own an iPad or an iPhone, and have an actual real life, warm blooded friend with opposable thumbs, you can jump into the action right now and try out Micro Battles for free. Each day will see one of the four games selected at random, and you can play an unlimited amount of times, with no timers and no ads. For an in-app-purchase, you can then unlock all four games to be playable at your leisure. Simple.

Micro Battles is a step back towards Donut Games' usual stomping ground of casual gaming. Its previous title - Traps 'n Gemstones - saw the developer dip its toes very successfully in harder core gaming waters with a fully fledged 2D platformer. We gave it the full review treatment in Grab It Episode #7.

Check out the trailer below for Micro Battles, and grab it right here for free.