Batman: Arkham Underworld leads the pack and seems to be inspired by the success of freemium strategy titles like Star Wars: Commander. The aim of the game is to rule Gotham City by building a hideout and training an army of lowly henchmen to do the nasty work for you. Although all signs point towards a F2P Clash Of Clans copy, my undying love for the DC universe forces me to remain optimistic. That was until I signed up to the beta and received these telltale questions: 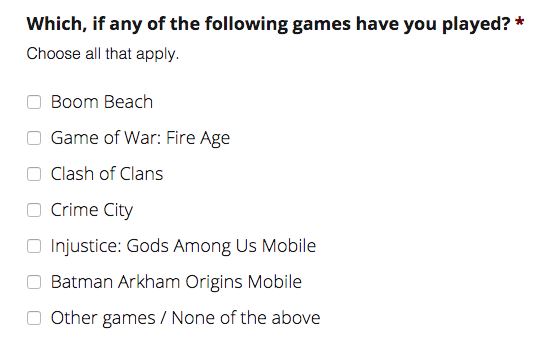 And why is it titled Batman: Arkham Underworld? You don't even play as the Bats, and you're not trying to rule Arkham Asylum. I know little about the game, and already it appears that Warner Bros are relying on the success of previous Arkham titles to sell this one.

The Game of Thrones title seems to be of a similar vein, too. In this combat-strategy game, you’ll be vying for power in Westeros by managing a team of spies and a powerful army. With two great Game of Thrones titles already available on iOS (one from Telltale, and Ascent), is there room for a third? At least the Mortal Kombat X tie in seems to more closely resemble the Injustice companion app, which, for a freemium game, wasn’t all that bad. Injustice: Gods Among Us introduced a kind of neat brawler/collectible card game hybrid where you unlocked characters and special attacks by winning cards or purchasing booster packs.

As for the rest, there is little information on DC Comic Legends, and we all know what to expect from the LEGO Batman: Beyond Gotham port.

Warner Bros are hitting the comic book, and television show cultists hard with this latest announcement. But, to me at least, it seems pretty transparent that cutting edge gameplay isn't the driving force. What are your thoughts? Let us know in the comments below.