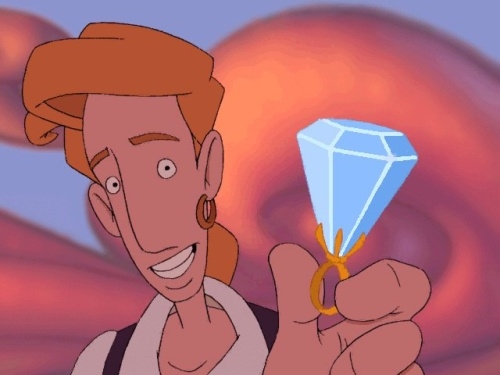 Who doesn’t love a good pirate adventure? Certainly the billion dollar success of the Pirates of the Caribbean series is a testament to that fact. Despite this, the pirate genre is one that is criminally underused in games. About a decade ago, we went through a phase where every other game was based in WWII and we’re currently going through an extended zombie phase, so why not make pirates the next big thing?

In anticipation for this new wave of pirate games, which I’m convinced is going to happen, I've picked my top 10 best pirate games of all time. So strap on yer boots me hearties and get ready to tear my list to shreds in the comments below! Do you agree with what I've put together? What other worthy pirate games have you played that deserve a spot on this list? 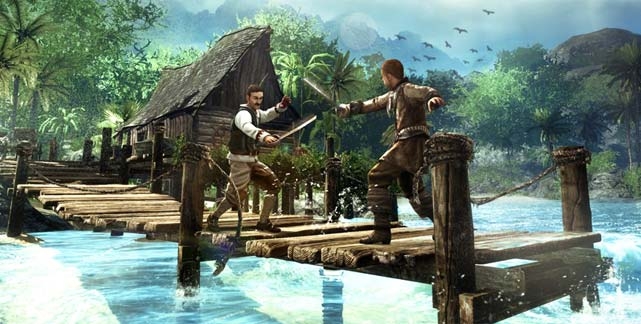 10. Risen 2: Dark Waters
Developer: Piranha Bytes, Wizarbox
Released: 2012
Available on: PC, PS3, X360
For those after a gritty, swashbuckling pirate experience, Risen 2: Dark Waters is a solid pick. Developer Piranha Bytes did an excellent job in capturing what I've always imagined the pirate world must be like – a beautiful world of glassy oceans and thriving tropical islands, full of thieving, drunken, barbaric thugs. As a third-person action-RPG, the pirate world comes to life with a long list of quests to complete and exciting character progression. Interestingly, the pirate theme is also mixed with fantasy elements in a world where magic and voodoo exist. (It actually works better than you might think.) It’s certainly not without its faults, with slightly frustrating combat mechanics and the occasional bug, but Risen 2 is a worthy inclusion on our list. 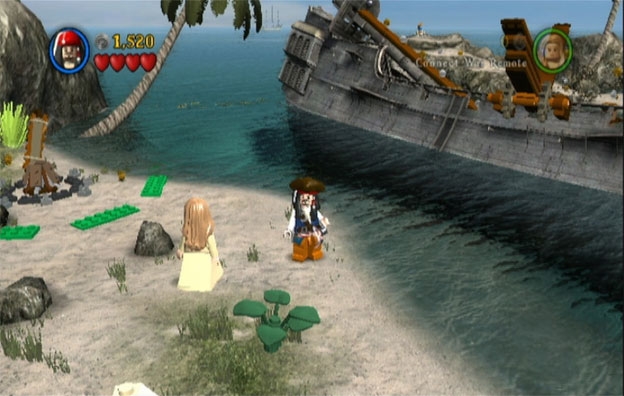 9. Lego Pirates of the Caribbean
Developer: Traveller’s Tales
Released: 2011
Available on: Wii, 3DS, PSP, PC, OS X, X360, PS3
Is there anyone who can resist the tantalising charm of Lego combined with Johnny Depp? Lego Pirates of the Caribbean is what we’ve come to expect from developer Traveller’s Tales – a solid entry in the Lego series with a fun story to play through, more collectibles than the eye can see and a dose of slapstick humour to boot. The game covers the four Pirates films that have been released to date; it is oftentimes hilarious to see Lego’s take on some of the more dramatic moments from the films. If you don’t enjoy the Lego game series, Pirates of the Caribbean won’t change your mind. But for everyone else, this is an incredibly entertaining take on the whole pirate culture. 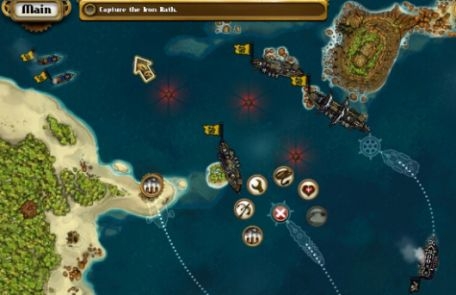 8. Crimson: Steam Pirates
Developer: Harebrained Schemes
Released: 2011
Available on: iOS (grab it here)
In as much as a pirate game can fly (sail?) under the radar, Crimson: Steam Pirates is a criminally underrated iOS strategy game. Developed by Harebrained Schemes (of Shadowrun fame,) you know that it’s going to be a solid title with a healthy dose of strategy required. As rookie captain Thomas Blood, you’ve just been handed a brand, spanking new ship to commandeer. In turn-based encounters, the objective is to engage enemy ships and sink them before they blow a gaping hole in you. As is typical with these games, the more you progress, the more interesting it gets. After some time, you’ll begin amassing a larger crew and a larger fleet of ships. You’ll need it too, with the enemy also getting a buff, with submarines and elemental powers eventually being thrown into the mix. 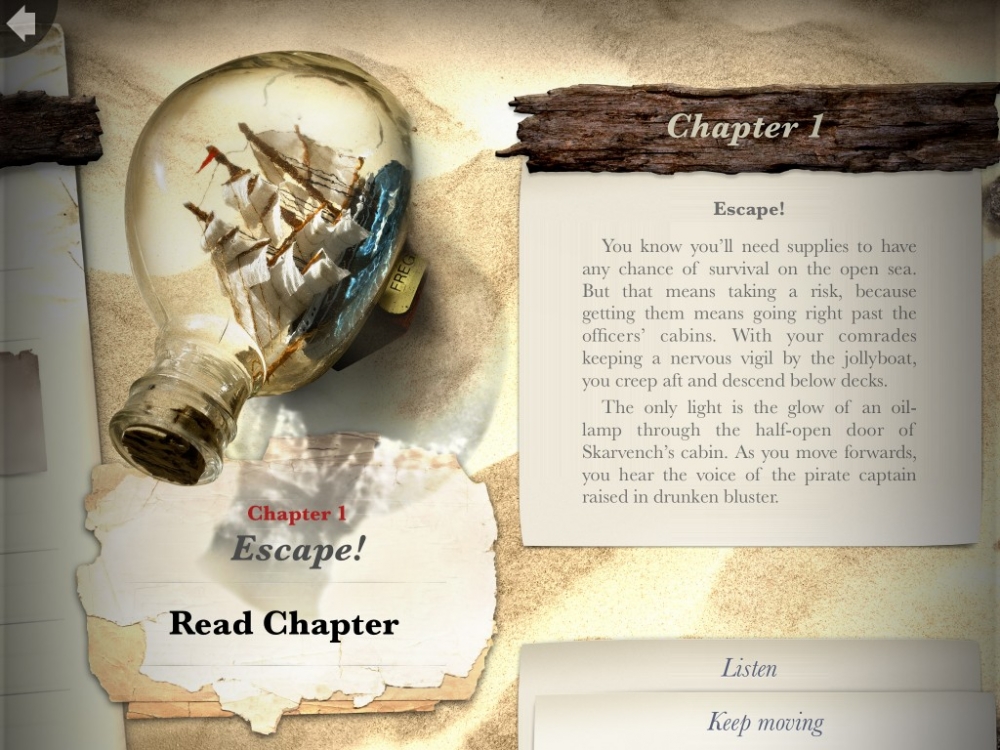 Let me be the first to admit I cheated on this entry. For the life of me, I could not choose between these two excellent games. Down Among The Dead Men (inkle - grab it here) and Fighting Fantasy: Bloodbones (Tin Man Games - grab it here) are both digital gamebooks available on iOS and Android. However, the experience of a digital gamebook may be unfamiliar to many. In short, they are works of fiction that involve the reader by allowing them to make choices which effect the story's progression (aka choose-your-own adventure.) These two gamebooks in particular are not only wonderful examples of the genre, but they convey in such a powerful and exhilarating way the harsh beauty of the pirate life. Whether you’re forging your own pirate adventure in Dead Men or chasing down the pirate-lord Cinnabar (i.e. Bloodbones,) there is a significant amount of gameplay on offer. For example, Dead Men has three difficulty modes, 125 000 words of dialogue and over 2 000 branching pathway options.

For more on gamebooks, read our exclusive feature article with Tin Man Games about the reinvention of the genre on touchscreens in Episode 6 of Grab It. 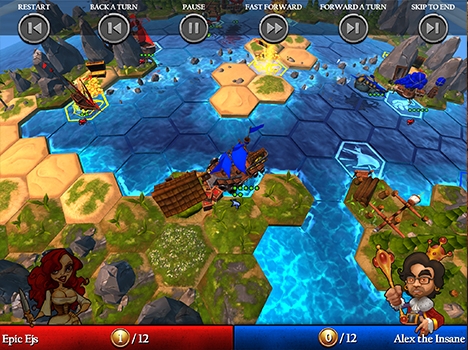 6. Age of Booty, Age of Booty: Tactics
Developer: Certain Affinity
Released: 2008, 2014
Available on: PC, XBLA, PSN, iOS
Similar to Crimson: Steam Pirates, Age of Booty (grab it here) is a real-time strategy game in which gameplay revolves around commandeering a vessel to attack enemy ships and towns. It’s more of a light-hearted take on the genre with a colourful world and even more colourful characters. Although there is a solo campaign in the 2008 version, the standout feature of this title is the online multiplayer. There’s nothing quite like outsmarting another person and blowing them to smithereens. And, of course, who can forget the booty? There is an excellent sense of progression from every battle that makes you want to "play just one more game," in which you work towards building up a fleet of devastating ships and new badass captains. 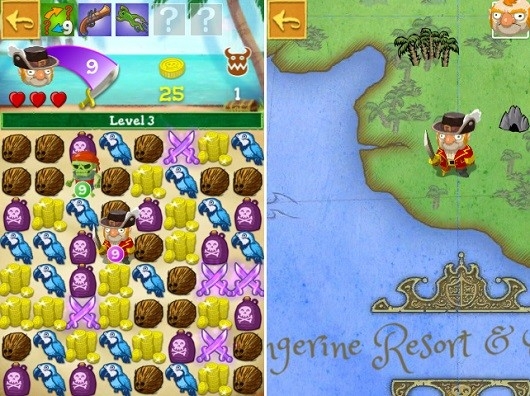 5. Scurvy Scallywags
Developer: Gilbert & Kauzlaric
Released: 2013
Available on: Android, iOS
From the wonderful (if not slightly eccentric) mind of Ron Gilbert comes the colourful pirate game Scurvy Scallywags (grab it here). It’s a match-three puzzler, but before you get too disappointed know that, like a well hidden treasure chest, digging just below the surface will yield a much greater prize. Scurvy Scallywags is far more than a simple match-three game as it sees you sail the high seas in search of the ultimate sea shanty. This naturally involves exploring a bunch of appropriately piratey islands, fighting down-on-yer luck pirates and, of course, digging up treasure. Gilbert’s humour is on full display with some incredibly funny song numbers and "dad joke" cringe-worthy nautical jibes. To truly get the most from this title, you need to let go of any predisposition you have towards match-three puzzlers and go with the flow. Trust me; Gilbert has been around long enough to know how to make an incredibly fun game.

4. Donkey Kong Country 2: Diddy Kong’s Quest
Developer: Rare
Released: 1995
Available on: SNES, Gameboy Advance
Heralding all the way back to the SNES era is our next entry, Donkey Kong Country 2. This timeless 2D platformer isn’t a pirate game per se, but the wonderful pirate-infused theme is impossible to ignore. Whether you’re riding Rambi the Rhino across the decks of a galleon, avoiding Zingers while climbing the rigging or furiously swimming away from Lockjaw, it’s an absolute blast to play. And what about those bosses? How much more high seas can you get than a giant pirate crow, a massive pirate sword and King K Rool, who wields a giant blunderbuss and fires kannonballs. Pirate theme aside, the game is, in itself, one of the best platformers of all time. So if those feelings of nostalgia are beginning to bubble to the surface, dust off your Super Nintendo, blow on the cartridge and away you go! 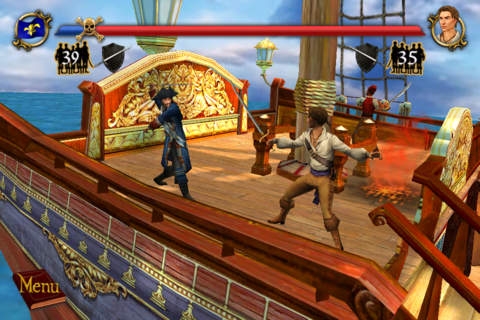 3. Sid Meier’s Pirates!
Developer: MicroProse, Oasys Mobile
Released: 1987 – 2012
Available on: PC, OS X, NES, XBLA, PSN, Wii, PSP, iOS
With more re-releases than a Marvel comic series, Sid Meier’s Pirates! (grab it here) has been doing the rounds for what feels like forever. But there is good reason for it. Sid Merier’s Pirates! is one of the most in-depth, strategic and downright fun pirates games you’ll ever come across. The game starts off with your family being kidnapped by the dastardly pirate captain Marquis. It’s down to you to rescue them, but how you go about it is completely your choice. Crossing cutlasses with other beer-swilling thugs, raiding ports and sinking galleons are all part and parcel of the experience. But the game won’t go on forever. The longer you play, the older and wearier your character becomes, lessening the chance of being able to rescue your family. The game may have been floating around for several decades, but you’ll be hard pressed to find a better pirate experience.

2. Monkey Island Series
Developer: LucasArts, Telltale Games
Released: 1990 – 2009
Available on: PC, Mac, PSN, XBLA, iOS
The Monkey Island series defined my teenage years. I grew up in the golden age of point-and-click adventures, and there was no bigger star than Guybrush Threepwood, mighty pirate! The team at Lucasarts created a masterpiece in the Monkey Island series (grab The Secret of Monkey Island here or Monkey Island 2 here or Monkey Island Tales here), painting the gritty world of pirates onto a colourful canvas. The game has constant bellylaugh-worthy humour, frustrating (though incredibly fun) puzzles and characters I will never forget. The lovable buffoon Guybrush is the standout of the cast, but the demonic talking skull Murray is an absolute blast. I highly recommend playing through all of the games, but my personal favourite has to be third entry, The Curse of Monkey Island. This entry marked a significant turning point in the series, moving to 3D animation, voice dialogue and adopting what has to be my favourite comic art style of any game. Do yourself a favour and pick up this series. 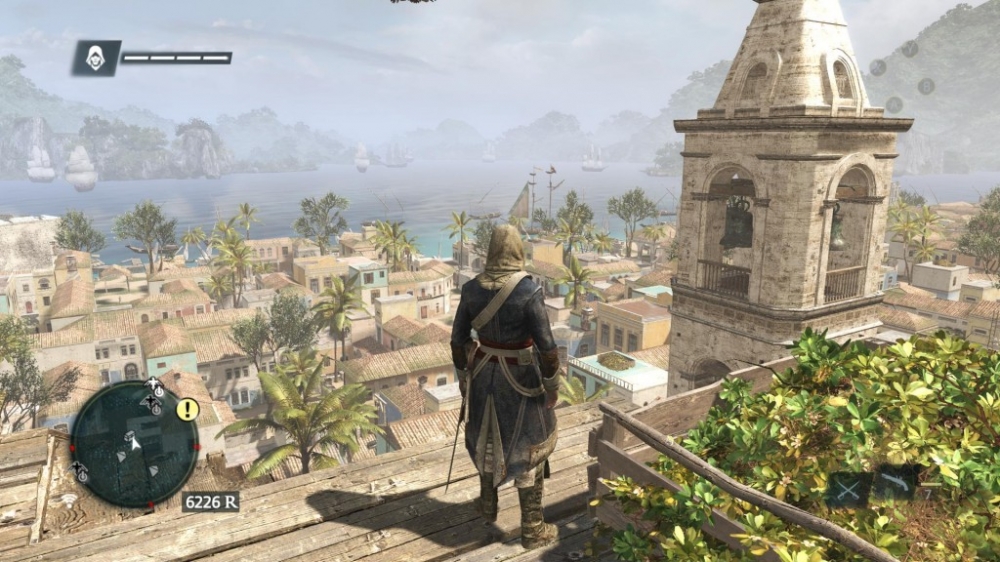 1. Assassin’s Creed IV: Black Flag
Developer: Ubisoft Montreal
Released: 2013
Available on: PC, PS3, PS4, X360, XOne, Wii U
Although we may be becoming slightly weary of an annual Assassin's Creed instalment, Ubisoft got so much right with Black Flag. I don’t think I have encountered a richer or more detailed pirate world than that in Black Flag. From the lush, tropical islands teeming with wildlife, the bustling commercial ports and the adrenaline rush of battling it out on the high seas, there has never been a world that has pulled me in so deep. Truly, I have spent hours simply exploring everything there is to see.

By itself, this would have been great. But mashing together the idea of an assassin and pirate works in a way I never thought it would. I don’t think I have ever had as much fun as when I am effortlessly traversing those lush islands, jumping from the top mast of my ship and crossing swords with land lubbers. For those after the ultimate pirate adventure, Assassin’s Creed IV: Black Flag is a must buy. I might also add that for those who enjoyed the naval combat, the mobile spin-off title, Assassin’s Creed Pirates, is also a worthy download.