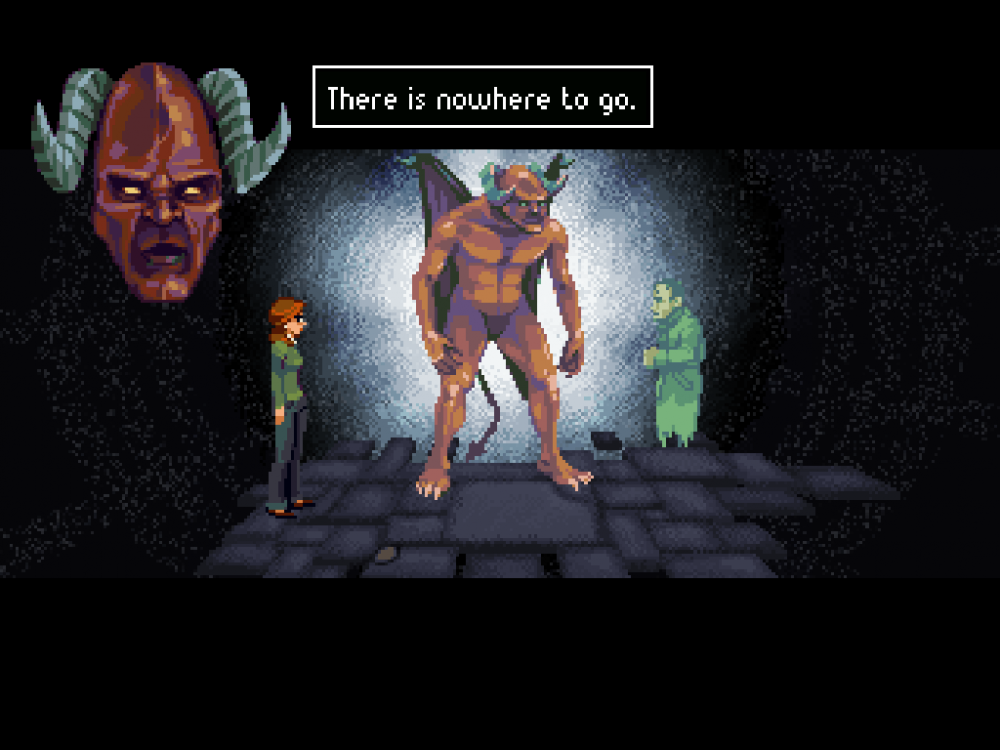 Point-and-click adventure games have been enjoying a rebirth in popularity over the past few years, with a number of high profile and high quality titles making their way to our iOS screens. Not only have we enjoyed a slew of innovative new adventure games – did someone say Machinarium or The Wolf Among Us? – developers have also tapped into our nostalgia by bringing old classics back to life. Developer Wadjet Eye Games has jumped aboard the bandwagon, bringing its previously PC-only point-and-click adventure series, Blackwell, to an iOS audience.

The Blackwell games – Legacy, Unbound and Convergence – probably can’t be called “old school,” since the first title in the series was only released in 2006. But that’s certainly the feeling that Wadjet Eye Games has gone for, taking clear inspiration from developers like Sierra and LucasArts, with a retro visual style. If you’re old enough to remember these classic adventure games, it’s a nice touch that invokes warm and fuzzy feelings of your childhood. Having said that, the art style doesn’t always hit the mark, but more on that below.

In Legacy, we are introduced to series protagonist Rosangela (Rosa) Blackwell, a freelance writer who lives in New York. The story starts off in high gear with the intriguing premise of a college girl who has just committed suicide and it’s up to Rosa to investigate the story. However, the plot quickly takes a sharp turn and we are soon introduced to Joey Mallone, the Blackwell family spirit guide. Yes, that’s right – it turns out that the Blackwell games are about ghosts.

Not having read the plot before I came into the game, it was certainly an abrupt, almost off-putting, change of pace. But let me encourage you to stick with it, as the story is ultimately quite satisfying. Across the course of the three games – read below for more details – Rosa and Joey are tasked with guiding other spirits “into the light.” Sure, it’s a bit cliché’, but the story wrapped around this premise involving demons, insane spirits and murder is actually quite captivating.
One of the best parts of the Blackwell games is the stripped back inventory management system. If you’ve ever played a classic point-and-click adventure game circa early 90s, you’ll understand the frustration of tracking down seemingly random items and getting your head around how they are supposed to be used. In some cases, if you missed an item, you may not even be able to finish the game. I’m looking at you Space Quest 1!

While there are some items to collect throughout the Blackwell games, being a writer, Rosa spends most of the time with her nose buried in her notebook. Rosa’s notebook serves as the focal point where all clues collected during her investigations are stored. Clues can be combined together, setting Rosa’s train of thought down another possible path of investigation. It’s a refreshing take on classic inventory management and fits in nicely with the investigative vibe.

While its innovative in some areas, the Blackwell games rely on other classic point-and-click adventure elements that should be consigned to the bin of history. I can’t emphasise enough how frustrating it is to be caught in looping conversations with characters. Even after meeting a character, and having several conversations with them, you can still often choose a dialogue option (repeatedly) that assumes the character has never met you before. In other situations, the logic of conversations baffled my mind. I shouldn’t be able to ask a character, who I have just met, a question such as “where is Joseph Mitchell?” before then asking “who is Joseph Mitchell?” It’s a frustrating blight which doesn’t sit nicely with the investigative theme.

Overall, the Blackwell games are a mixed bag, and each should be judged accordingly (see below). Looking at the series as a whole, however, these are games that are ultimately worth your time. The intriguing plot and smart revamp of the inventory management system should be enough to ensure you enjoy your supernatural romp with Rosa and Joey.

Blackwell: Legacy - Grab It Here
As mentioned above, not having played the Blackwell games when they originally released in the 2000s, the premise of Legacy initially threw me. But I quickly warmed to its intriguing plot. A number of college girls have turned up dead with suicide to blame, but not all is as it seems. Rosa’s investigations turn up the presence of a ghost called The Deacon, who somehow connects the girls. The plot takes a few twists and turns into increasingly outlandish territory, but if you keep an open mind (we are talking about ghosts after all) then you’ll enjoy it just fine.

Legacy is heavily influenced by classic point-and-click adventure games from developers like Sierra and LucasArts. Technically, Legacy captures the look of these classic adventures spot on, but it’s missing what can only be described as that “spark” which made games like Space Quest or Leisure Suit Larry so memorable. Environments are bland and forgettable, and it doesn’t help that there are only a handful of places to visit. As you might expect, the backtracking from one place to another becomes tedious very quickly. In addition, most characters come off about as interesting as a slab of concrete due, in large part, to the voice actors who seem incredibly uninterested in pouring even a thimble of emotion into their lines.

These issues aside, it’s still quite easy to get wrapped up in the mystery and intrigue of Legacy, laying the foundation for future games in the series.

Unbound - Grab It Here
Blackwell: Unbound takes a step back in time with Rosa’s aunt, Lauren, sharing the spotlight with Joey. The game revolves around the investigation of two ghosts who have recently died, with a mysterious, seemingly insane, woman called The Countess linking them together. I won’t spoil the finer details of the plot, suffice to say it’s weaker than that of Legacy, but does lead into the third game, Convergence, quite nicely.

The game has a much grittier feeling compared to Legacy, being set in the seedy underbelly of Manhattan during the 70s over the course of a rainy night. The atmosphere often feels oppressive and even depressing, as Lauren and Joey visit a number of sleazy locations and interact with a bunch of sad, broken people. The soundtrack adds another haunting dimension, with sombre saxophone, blues-esque melodies. This dark backdrop is quite likely the effect that Wadjet Eye Games was after, but I still came away feeling depressed and, yes, even a bit seedy after playing it.

Unbound introduces a new mechanic, which allows players to take control of both Joey and Lauren. Joey can’t physically interact with real objects, although he can touch other spirits, make a breeze and interfere with electronic equipment. This is a great step forward for the series, opening up a whole new spectrum of plot ideas and puzzles. The idea is implemented smartly and is not over used.

Convergence - Grab It Here
Blackwell: Convergence is, by far, the best game of the trilogy. Right from the get-go the game looks sharp with updated graphics. These visuals are put to good use, with a variety of interesting locations and environments that come alive, even with the series’ seedy underpinning still very much on display. It also helps that the voice actors finally start to hit their rhythm, coming across as interesting and passionate.

Convergence jumps back into the shoes of Rosa and Joey six months after the events of Legacy. However, the story follows on from Unbound, with a number of mysterious deaths being linked to the now infamous Countess. The story wraps up the trilogy nicely, but rewards players who have worked their way through the first two games more so than newcomers. Many of the plot ideas and references may not make sense if this is the first game you’re jumping into.

The puzzles and detective legwork required by Rosa and Joey are outstanding, sitting head and shoulders above the other two games in the series. In true detective fashion, answers to puzzles are subtly and surreptitiously dangled in front of the player. You’ll actually have to sit back and think about the solution, but never to the point where the answer is infuriatingly obscure. Upon piecing together the next part of the puzzle, the game ushers the player from one location to the next.

There is some backtracking to previously visited locations, but it feels meaningful and never boring. If I was to recommend only one game from the series for someone to try out, it would be have to be Convergence.