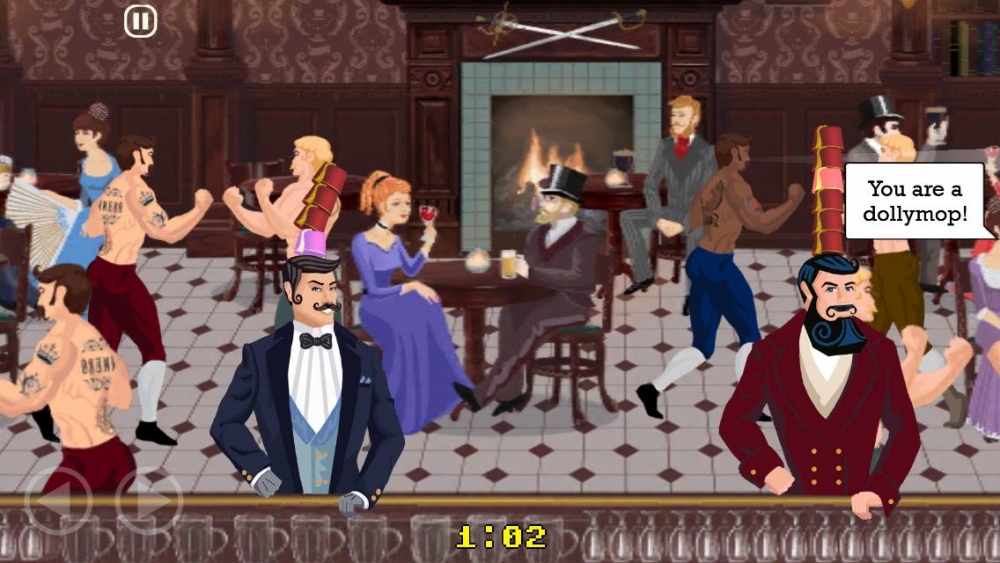 Every so often a game comes along that is so completely wacky, you can't help but smile in appreciation. Well, get ready to plaster a big goofy grin on your face because Max Gentlemen is a game all about stacking hats in the most gentlemanly manner possible. Yes, the objective truly is to stack hats as high as you can through a series of minigames.

One such minigame pits you against a well-manicured gentleman in a bar where every beer you manage to drink before your opponent gives you another hat to stack. But watch out for flying boomerangs and darts, otherwise you'll lose a hat or two. Meanwhile, in the background is a bar brawl involving muscly men hurling gentlemanly insults at each other. Sound insane? What else can we expect from a game that was inspired by a spam email. However, while at no point does developer The Men Who Wear Many Hats take itself seriously, I'm thankful the studio has still worked hard to create a slick experience, with tight and intuitive controls.

Apart from it being jolly good fun, the relatively shallow experience is given legs with the option to challenge mates to a hat stacking duel and through new hat varieties that are unlocked the more you play. I've never been so excited to unlock a fez! The developer has also taken a sensible approach to IAPs. With the base game being free, you're able to grab a few extra minigames, characters and additional hat varieties for a couple of dollars.

Max Gentlemen probably won't be in the running for game of the year or even be a game you're still playing in six months. But not only do I have a far greater appreciation for the humble hat, I have added a large number of gentlemanly insults to my repertoire. Now go grab the game you foppish cad!