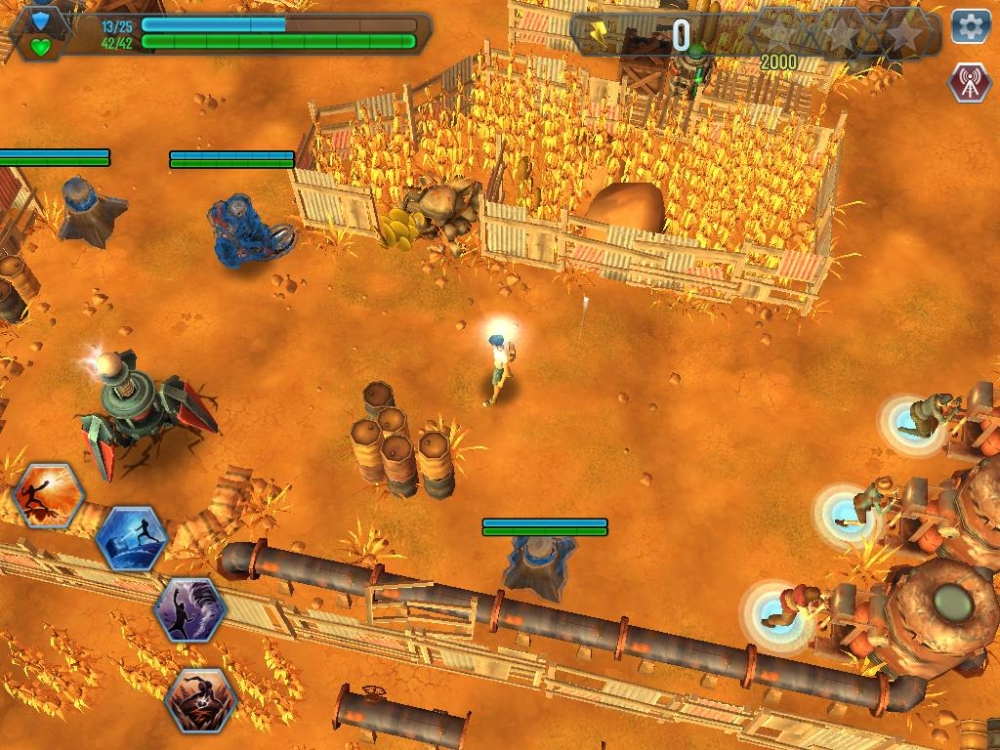 Whenever a really famous person attaches their name to a product, there’s always that sneaking suspicion in the back of your mind you’re going to end up with something rubbish. You just need to look at all those ‘quality’ products heartily endorsed by Krusty the Clown to get an idea of what I’m talking about. So it was with some trepidation that I approached the debut iOS title from superstar musicians, Linkin Park. Yes you read that correctly. The kings of rock, Linkin Park, have joined the likes of Radiohead, Bjork, Skrillex and James Lavelle in branching out into the indie iOS gaming scene. And you know what? Their game – LP Recharge Wastelands – is actually quite good. Should I have ever doubted Linkin Park?

Sounding like it could be the plot for a half-decent action movie, Wastelands is set in the distant future; the Earth is a barren ruin, ruled by a race of hostile synthetic creatures known as the Hybrids. Taking the form of a top-down action game, players control the band members of Linkin Park as they fight the Hybrids across 50 stages, gradually unlocking songs from their latest album as you go to provide some pretty sweet background music.

Each level has a variety of objectives, like rescuing other humans and collecting loot. Movement and combat is simple, with players only needing to tap or swipe the screen. The band members are endowed with a variety of elemental powers (fire, water, air, earth) - and no, it's nothing like Captain Planet - all of which come in handy depending on the type of Hybrid you come up against. Wastelands has a vibe very similar to that of Second Chance Heroes, which itself is an incredibly fun and chaotic action game.

Wastelands has undoubtedly been designed to appeal to the broadest audience possible, resulting in an impressively multilayered game. The top layer is quite simple, meaning that players after a relaxing experience can casually stroll through each level, racking up a few kills here and there while enjoying some nice beats from Linkin Park.

However, for people like me who are slightly compulsive in completing every single objective, underneath this top layer is a far more difficult title. To achieve the highest three star rating possible, players will need to strategically plan their run through each level, stringing together multiple kill combos whilst completing the objectives. This is actually far more difficult than it might sound, resulting in a game that I can only describe as fantastically frustrating.

Interestingly, Linkin Park are no strangers to the gaming scene. As part of the band’s ‘Recharge’ universe, the group released the free-to-play action puzzler, LP Recharge, as a Facebook-only title in late 2013. It’s obvious that the impressive (and criminally understated) developer sitting behind Linkin Park – Kuuluu Interactive Entertainment – has leveraged its experience with this Facebook title. The end result is a game that rightfully deserves the Linkin Park name on it, respecting both fans of Linkin Park’s music and gamers alike.

Whatever angle you might be coming from, you’re likely to enjoy your time with Wastelands. Both Linkin Park and Kuuluu Interactive Entertainment have shown the utmost respect to their fans, meaning that this is a game you can get behind with confidence, rather than being a cheap cash grab.