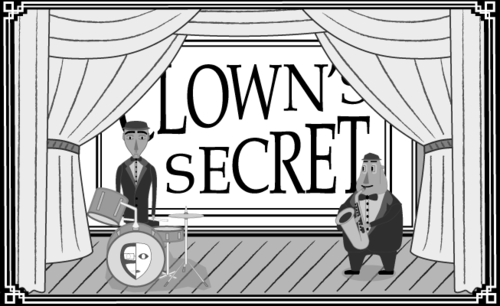 A few days ago we reported on the upcoming adventure title, Clown's Secret, from Expression Studios. It certainly caught our eye, being best described as a 2D adventure game inspired by the work of silent film extraordinaire Charlie Chaplin while channeling the creativity and fun of Monkey Island.

We caught up with lead game designer, director and writer Luciano Rateke ahead of its late 2014 release to find out some exclusive details on the development process and what we can expect from Clown's Secret.

How did this amazing idea for a game come about?
It came from a true passion of both classic movies and adventure games. To define one moment specifically would be impossible; this was actually an idea that has grown inside me little by little over time. One thing that I’ve always loved is a good story - it doesn't matter if it was in a movie, a game or a book. That's why I love adventure games because they traditionally have great stories. Just look at titles like Beneath a Steel Sky, Grim Fandango and, more recently, the Walking Dead. They have such incredible plots that it’s almost impossible not to be moved by them.

Adventure games are also known for having memorable characters – for example, look at Monkey Island. Guybrush Threepwood is, in my view, the most memorable character of all time in the history of gaming. In the beginning, he is very silly and naive. As the series progresses, he grows but never loses the humorous touch he is so remembered for.

It's this passion for stories that also make me love cinema. If I had to decide on the one point that was truly remarkable enough to make this idea come to life, it would be when I saw the 2011 movie Hugo, directed by Martin Scorsese. In the middle of the movie, we’re shown a glimpse of the incredible work that Georges Méliès did for cinema. When the movie released, it was a hit! It showed that people still cared for our old silent friends and, in a kind of way, that we're hungry for knowing more about them.

The movie left a huge mark on me and I started to think that I wanted to make something to show more about those remarkable films. But I wanted to make something more focused for a younger generation; the generation that I'm part of. When I think about what my generation consumes as art, I think about games. Games are the great art form of this century, one that distinguishes itself from others because of the capability of interaction, expanding the possibilities of creation to higher levels. So that's what I decided I would make - a game based on classic movies!

How many silent films did you sit down and watch before putting together the concept for Clown’s Secret? What did you learn by watching these films?
I think we watched around 150 movies for the purpose of using them in the game. As part of this, we watched all of Charlie Chaplin’s movies - that's around 80 films - and a lot of others from the beginning of the last century, including those from George Méliès, and movies like The Great Train Robbery, The Birth of a Nation, The Seventh Seal and Metropolis.

In the end we had too much material and we decided we had to cut things down. That’s when the idea to stay with a Chaplin-themed game came about; after all, he is the one we love the most. Other movies will be in the game too, some as part of the story of Clown's Secret, others as easter eggs. We are making a lot of easter eggs!

I frequently remember one idea that David Mamet wrote in his book On Directing Film. He said that when telling a story [through film] you can't say everything about it. You have to leave something to the imagination of those who will watch that story so that, in their minds, they can fill in the gaps.

Reflecting on those words, I started to realise that maybe what matters most is not the product itself, but the capability of creating fantasties in those who are touched by it. Looking at it from this point of view, silent films have it all! By not having the possibility of talking, people of the time had to learn how to tell stories exclusively through a visual way. To be able to tell a story with this limitation, they had to think hard, they had to be truly creative and the result is some of the most impressive and memorable scenes mankind has ever produced. We can learn a lot about telling a story from those movies.

What it is about Charlie Chaplin that makes his movies such a rich source of inspiration? Do you feel a sense of pressure to do justice to his work?
Quite simply, Chaplin changed things. If we consider cinema as a form of art today, a great deal of that we owe to Chaplin. He was capable of being comical, political, charismatic and philosophical, all at the same time. He dared to always make something new. He always pushed himself forward to make better movies and to bring meaning to cinema. When we see the solitary, naive clown of The Circus, the charismatic, humanistic man of Modern Times, the silly, egocentric dictator of The Great Dictator, and the clown that is no longer funny in Limelight, we see a man in love with his work!

That true love to push things forward, for daring to be different, is something that hugely inspires us here at Expression Studios. We believe that creating digital art with meaning is a tool of expression. That is our principle - to bring meaning to entertainment, like Chaplin did. This is one of the reasons we decided to begin it all with a Chaplin-themed game. Because Chaplin considered himself to be a clown, we called this game, Clown's Secret.

The story for Clown’s Secret is based on the 1947 Charlie Chaplin film, Monsieur Verdoux. This movie tells the story of a bank teller who marries and murders a series of wealthy widows to get their money. You mentioned that this movie was quite daring for its time. Do you see Clown’s Secret as a daring game?
From a conceptual point of view, Clown's Secret is hugely daring. We are uniting the story from dozens of silent movies into one coherent plot and presenting it to someone who has never even heard about those movies. You can bet that it was far from being easy.

I went about with all of those stories in my head for almost five months. I thought about them all the time until one day, as if by a miracle, things started to make sense. I sat down and in one week I wrote the whole script. When I finished it, it looked like madness! It had a lot of characters, a lot of scenes and a lot of movie references. It was almost 100 pages and was huge - it was completely daring. I loved it!

You cite the influence of excellent adventure titles Monkey Island, Broken Sword and Machinarium: what have you learnt from these games that you are looking to incorporate in Clown’s Secret?
Despite the three of them being adventure games I see them as totally different games. What strikes me the most in Monkey Island, besides Guybrush Threepwood, is the huge amount of humour. In fact, humour is something that keeps the player going and is one of the things that makes Monkey Island so memorable. With Monkey Island, I learnt that humour matters.

Broken Sword is, in my view, the series that has the most logical approach to solving puzzles. When the player is stuck, they can think logically and eventually find the solution. That's quite a rewarding experience and something that keeps the story moving along. With Broken Sword, I learnt that maintaining a good flow to the story is important.

Machinarium introduced to us an incredibly cute character, Josef, in a beautiful hand-drawn world. Machinarium released in 2009 - in a time when adventure games weren’t so popular – and yet still became a hit. I think Machinarium was a huge inspiration to all of us who love adventure games, as it showed us that it was time for the point-and-click adventure game to make a comeback.

One of your goals is that Clown’s Secret has to resonate with people who have never seen a silent film before. How are you looking to do this?
Clown's Secret has been entirely written based on the premise that the player knows nothing about silent films. That being said, references to classic silent movies will form both a major part of the plot and in the small details of the script, and some characters have been completely inspired by certain movies. In addition, the player will come across lots of easter eggs (for example, we are going to recreate some memorable moments from classic movies within drawings in the game, replacing the real-life actors with Hal and Halbert.)

I can see that, while playing, people will want to talk more about those subtle references. We'll be engaging with those people, such as by being available on internet forums, to discuss why a specific thing happened, where the idea was taken from and so forth. Coming back to an idea I gave on a previous answer, by not specifcally revealing those references inside Clown's Secret, it may foster certain fantasties in those who play it. This may create a desire within players to know more.

What have you enjoyed the most about working on Clown's Secret?
I think it has to be the incredible amount of talent and interesting people we are meeting along the way. We are meeting great journalists, great artists and great developers. We are always sharing our ideas with them and they, in turn, share their ideas with us. This contact has been awesome!