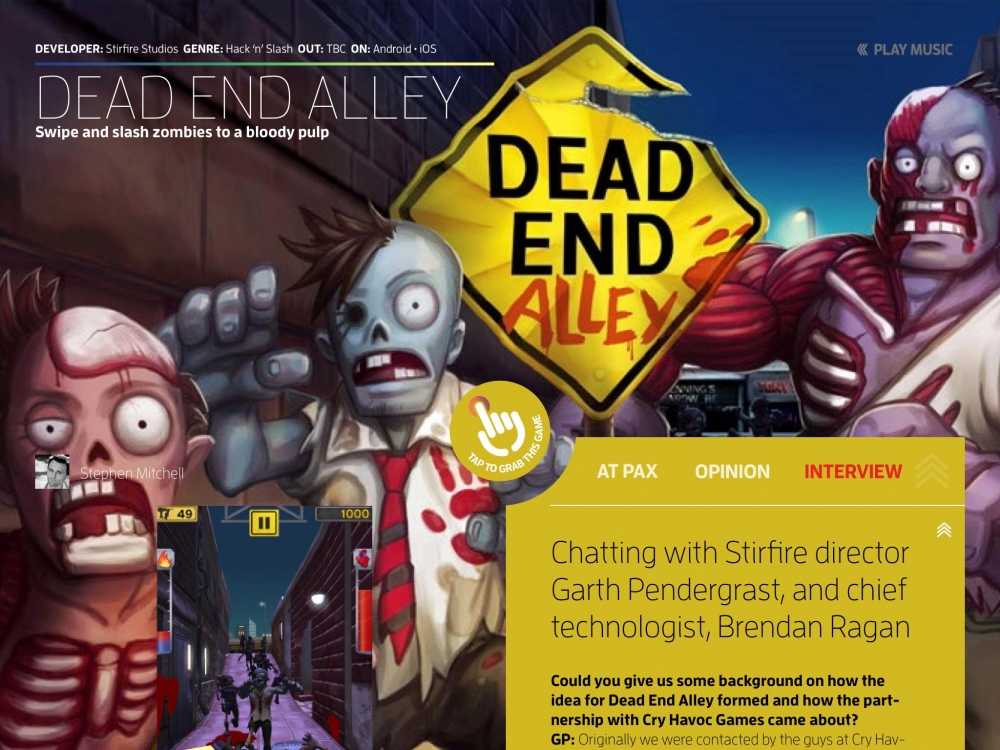 It seems to me that the only thing more satisfying than hacking and slashing zombies to a bloody pulp is doing so with a real-life chainsaw prop. That’s exactly the experience kinemortophobics (i.e. those who are terrified of zombies or turning into a zombie) can expect at Stirfire Studio’s booth at PAX AUS in Melbourne, Australia from October 31 to November 2.

The studio’s upcoming zombie hack-n-slash mobile title Dead End Alley looks to appeal to both casual and more established gamers alike. Stuck at the bottom of a dead end alley, all you can do is watch in abject horror as the hordes of shambling masses creep slowly and surely in your direction. Cue lots of hectic swiping and slashing on your mobile device with ye olde faithful – a trusty chainsaw.

From our hands on time with the game, the controls feel fluid and responsive, and it’s always satisfying to watch zombies fall apart into a bloody mess. But in even more exciting news, Stirfire Studios is also working on an Oculus Rift version. It’s one thing to swipe and slash zombies on a screen in front of you, but imagine the level of immersion that can be achieved with VR.

We recently caught up with Stirfire director Garth Pendergrast and chief technologist Brendan Ragan. Ragan was all too happy to spill the beans on the potential of VR for their game.

“The VR version of the game uses an Oculus Rift for a display, Microsoft’s Kinect 2 for tracking the player’s movements and a custom chainsaw controller for haptic feedback. The major affect that it has on the gameplay is one of immersion – between the headset, the controller and the tracking provided by the Kinect – despite only being able to see your chainsaw, you have quite a bit of presence. Then having cartoon zombies fall apart in front of you as you swing your chainsaw through them is a surprisingly satisfying experience!”

Of course you’ll need to make your way to PAX AUS in Melbourne if you want to haphazardly flail a chainsaw around and live out your dream of following in the footsteps of Ash Williams. To find out even more about what to expect from Dead End Alley, including a bunch of art, assets and the rest of our world exclusive interview with Stirfire Studios, be sure to pick up our absolutely free (for a limited time!) PAX AUS Indie Game Guide. It’s the best zero dollars and zero cents you’ll ever spend!