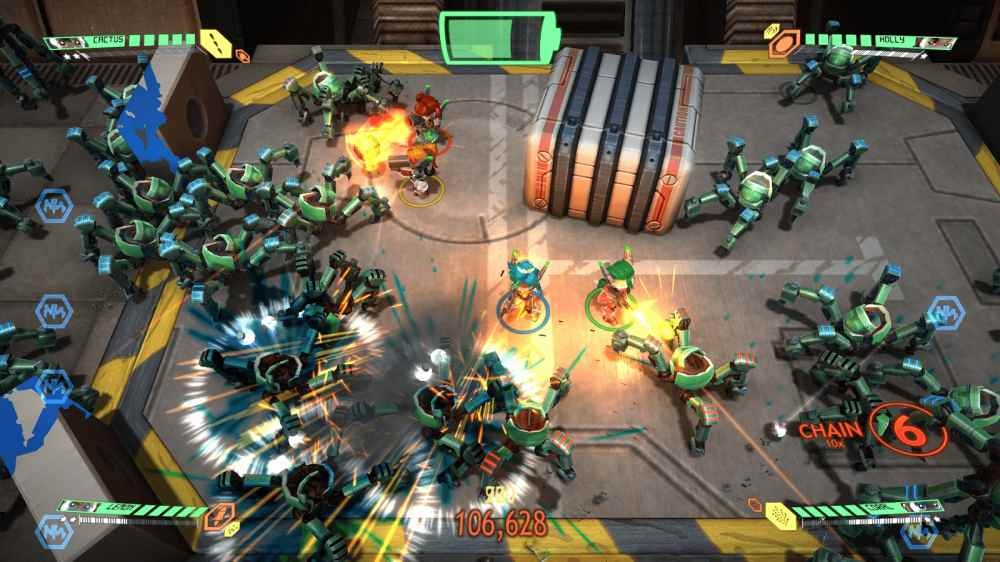 When a game allows you to easily chain 400 kills multiple times within a level, you know you’re on to a winner. The closest modern comparison I can make is with Dynasty Warriors, where your sole objective is to mow down waves upon waves of enemies, but really this recalls old-school bullet hell shooters. Seriously, Assault Android Cactus is intense. Like sensory overload intense. There were times when I could barely see Cactus through the rain of bullets, bombs and bodies flying in all directions. Throw into the mix a range of environmental hazards - like lasers and disappearing platforms - and you’ve got a recipe for one chaotic game. As crazy as that might sound, this is when Assault Android Cactus is at its colourfully hellish best and also it’s most satisfying.

Also Read: Our exclusive making of Assault Android Cactus feature in Episode 8 of Grab It.

Having come off the back of playing some really difficult games like Bloodborne and Dark Souls 2, it was incredibly fulfilling to rack up hundreds, nay thousands, of kills in short order. But what elevates Assault Android Cactus to the next level is that it’s not just a mindless button mashing experience.

Imagine this scenario: close to 100 enemies are on your screen; there's a rotating laser environmental hazard that kills you near-instantly if it makes contact; there's platforms that disappear beneath your feet forcing you to constantly rotate; and a quickly depleting power/health source that can only be refilled by a battery (Cactus is an android after all) that spawns in the middle of the largest group of enemies on the map. It’s not hard to see how combining these elements together makes for a rather intense and high octane experience that barely gives you time to breathe. And I loved every minute of it. 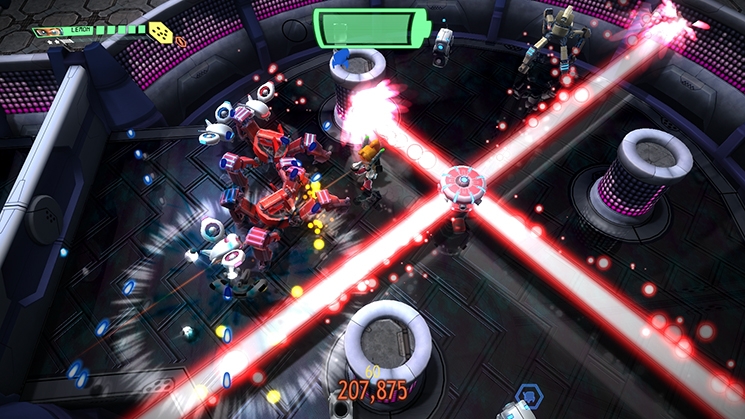 The boss battles in particular are worth singling out. Quite frankly they are spectacular. No boss is alike, each with a unique personality and set of moves that will insta-kill any player who drops their attention for even a moment. The beauty of these fights is that the bosses don't act as mere bullet sponges, though their health levels are seriously impressive. Each boss fight requires a deft strategy and level of thoughtfulness that left me quite impressed. Do I rush in for a few quick shots and incur a sweeping melee attack? Or sit back and possibly die from a long-ranged laser blast? And how could I forget to mention the hordes of minions, environmental hazards and the ever-depleting power source to manage at the same time...

As much fun as I had blasting my way through Assault Android Cactus, this is one of those games – like Diablo or Borderlands - better experienced with other people. Designed for up to four-player local co-op, I would thoroughly recommend hunkering down with a few mates, sinking back into the couch with a few frosty cold ones in hand and pushing the volume up to 11. It’s chaotic and intense. But that’s the sort of game Assault Android Cactus is and it's all the better for it.

After beating the main story, the depth of content on offer is actually quite staggering. Notwithstanding the nine separate playable characters (each of whom has their own distinct play styles and weapons) that can be picked across the 25 stage campaign, there are challenges, daily missions and community leaderboards to pit yourself against. The leaderboards in particular are perversely tantalising. On more than a few occasions, I finished a level feeling pretty smug only to be awarded a B for effort and see 100,000 people with a better score. Naturally, I had to dive right back in to better my community standing. All in all, it's a fantastic amount of content for the price of admission.

After my time with Assault Android Cactus, I feel very comfortable in saying that it's right up there as one of the best games of 2015. If nothing else, Cactus offered me an incredibly cheerful and genuinely fun experience right when I needed it this year. What more could I ask for from a game?

Assault Android Cactus is available on Steam, Mac and Linux right now, with PS4, Vita and Wii U version arriving. Sign up to our newsletter for word as soon as it comes to consoles.

Grab the game on Steam.