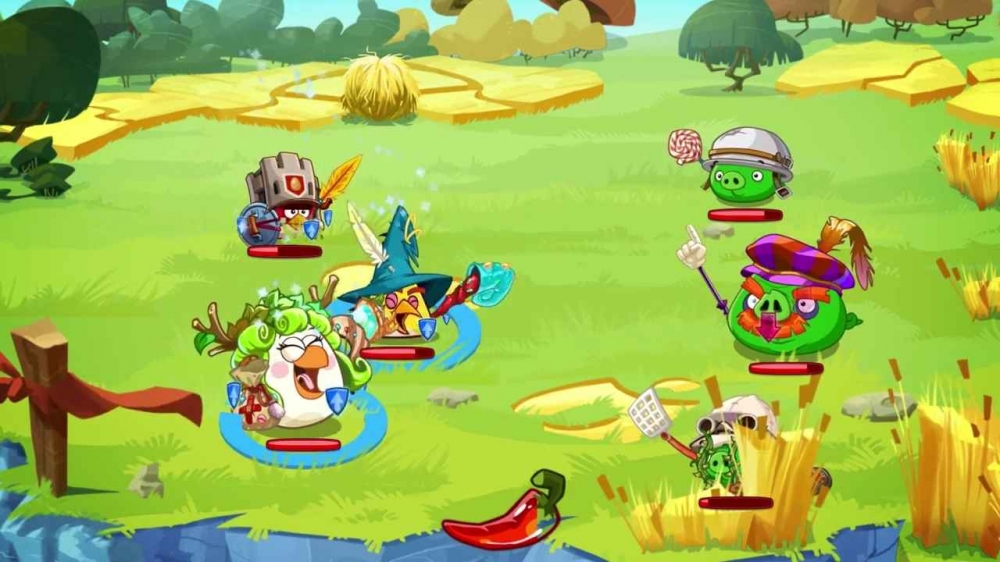 Over the last four years, Rovio’s Angry Birds series has built an army of fans hundreds of millions strong, and I suspect - given the arcade quick-fire nature of the core experience - that many of those devotees have never played a full-blooded role-playing game before. It feels very much like Rovio has designed its newest outing - Angry Birds Epic - with this fact in mind. Working on dual levels, Angry Birds Epic has elements that will ease newcomers into the genre’s mechanics, but smartly, Rovio hasn’t ostracised existing RPG fans in the process. There is enough here to offer veterans a challenging experience. I wouldn't call it a deep RPG, but I would say that it has depth.

RPGs are known for their storylines and Rovio has managed to create a fun narrative despite the fact the characters don't speak. It does this through awesome animation. The simple story of Green Pigs finding new and interesting ways to steal the Angry Birds’eggs unfolds through animated cutscenes that play out between chapters and events. All the birds and pigs are fantastically drawn with expressive eyes and facial features, never leaving you in doubt as to their intentions.

The level of detail and care put into the game’s animation also extends to the whole pirate themed setting of Piggy Island. Treasure chests, islands, coves, reefs, ports, grottoes, caves and much more dot the map - the majority of which is initially hidden in a fog that gradually lifts as you progress through the game.

The bulk of your time in Angry Birds Epic will be spent within its turn-based battles - once won, you unlock the next dot point on the map. Starting out in the tutorial levels with only one bird to fight with eases you into the basic mechanics. Eventually you’ll unlock additional birds until you have more than you can take into battle at any one time.

It’s at this point the game’s depth starts to reveal itself. By this stage you’ll be adept in crafting and forging magical items, weapons and shields from gathered loot, and will also be exploring the strengths and weaknesses of combining different birds in battle. All this new-found knowledge will be pitted against an imaginative array of Green Pig enemies, each of which have their own strengths and weaknesses to be countered.

For that half of the Angry Birds fanbase coming from casual beginnings, it may sound like an overwhelming style of play, but Rovio has built a clearly defined and scalable learning curve. Once it all starts to click, it’s satisfying to discover the tactics that work in difficult battles and snapping victory from the jaws of defeat. It’s a little like slingshotting your Angry Birds at Green Pigs structures until you finally find that sweet spot that brings the whole thing crashing down.

An example: I came up against five pigs that would come back to life two turns after I had knocked them out. Eventually I learned not to try and kill them one by one, but instead to take down their health equally, then at the end execute my Bomb Bird’s special skill - which does a great amount of damage to every enemy at once - finishing them all off together.

Thankfully, for those concerned about IAPs in a free-to-play game, I haven’t come across a battle I couldn’t win without eventually finding the right tactic. The ads that pop up after some battles do feel intrusive and I could certainly live without those, but that’s my only issue with the business model presented. In fact, I feel Rovio has done a great job making the player feel like they are always unlocking or earning something new. Even if you lose a battle, you’ll get a consolation prize.

I did find the constant chattering and squealing of the birds to be annoying and the lack of any quick and easy way to compare new items with old items is a missed chance to further streamline the experience. Navigating between the menu to decide what to forge or craft, and back to your inventory to see what you already have is not ideal.

These small issues aside, Angry Birds Epic is a fantastic new addition to the franchise that lays out the welcome mat for casual gamers to try hardcore things, while offering a solid backbone for existing RPG fans. Furthermore, I get the impression that Rovio is attempting to create a persistent universe with this offering. The map is so large and varied that once the main quest is complete, there is a huge playground available for future content.

Verdict: Rovio deserves kudos for bashing down the casual wall and inviting RPG and Angry Birds fans alike into the same space without alienating either camp. This is a polished, fun, long and satisfying experience that resists the temptation to sling IAPs at your face.

To read more reviews and get developer interviews and exclusives, check out the Grab It - Game Discovery App. It is all about helping you discover the best new iPad games:

We also recommend checking out the article, This Is Why Gamers Should Celebrate Angry Birds Epic.