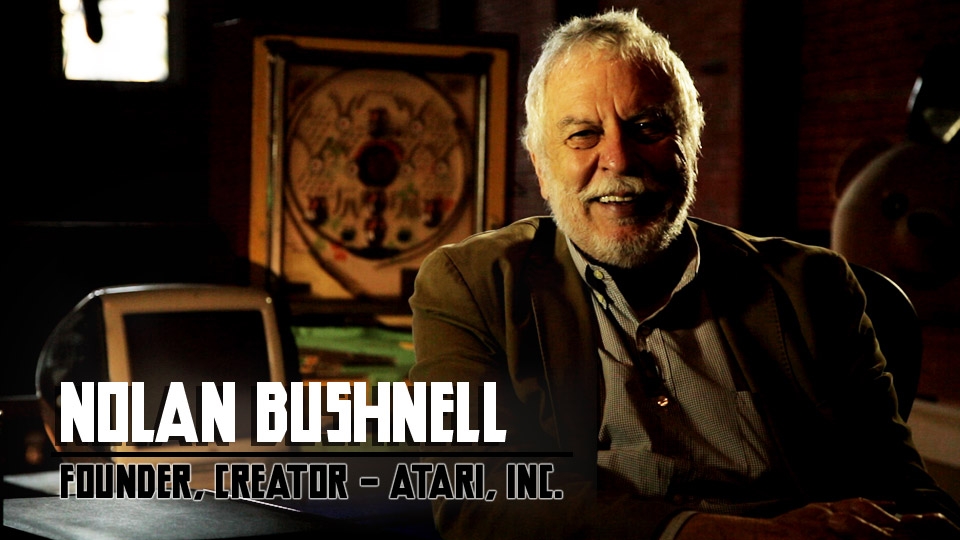 A few days ago I published my review for the new film Video Games: The Movie, put together by documentarian Jeremy Snead. Today I go one step further and interview the man himself about this fantastically enjoyable endeavour and what the future holds:

Also make sure you check out our latest episode of Grab It - The Game Discovery App, which features no less than nine exclusive developer interviews and hours of insight into indie gaming in iPad. This includes a behind-the-scenes snippet from the coming 2015 feature film Rise of the Indies, including an interview with director Lester Francois. Full details here.

Congratulations on the movie’s release, I watched it last Friday and really enjoyed it: you must be happy having it out in the world finally?
Absolutely and thank you. Someone asked me a couple of days ago what my favourite part of the process has been and I kind of jokingly said “being finished”(laughs). I kind of thought about it and it really is true; it’s been the most rewarding phase of making this film. Seeing it play with an audience and having it out there for people to enjoy.

How was the seed for Video Games: The Movie sown? Was it an idea that you had from a personal interest in the subject matter or was it something that you were approached from a third-party to write and direct?
It was definitely a personal project. It goes back about twelve years to when I started my film and video production agency - we’d do video trailers and commercial for video game companies. I’ve worked closely with game companies since then and through that I’ve grown as an independent film maker.

Seeing behind the scenes on how video games are made while growing as a film maker led me to learn more about the medium. About four years ago I was looking for a documentary about video games on Netflix and iTunes, and I just couldn’t really find one that I felt did the subject matter justice. So the next day I started playing around with an outline and a script and just started calling some clients of mine at Media Juice for interviews with Capcom and Activision, and here we are almost four years later. It was a little bit of an easier entry point for me because of my time making commercials for video games.

When tackling such a large timeframe - basically the entire medium from start to present day - how did you go about deciding what would be left in and what to cut?
The short answer? It was not easy (laughs). The outline did help to sort of whittle that process down, but the cut - as I’m sure as you’ve heard on most films - is kind of a final re-write in the editing room. So we didn’t cut components before filming and had about 45-hours of footage, but it was really some task shaping and refining the film in the editing process. Part of easing that process included having all of the interviews transcribed into a document.

So I bet you’ve got some good off-cuts for a future DVD release; hidden Easter eggs and that sort of thing?
Oh sure, yeah the DVD and Blu-ray is going to be a real treat for anyone that likes the film because we’ll have lots and lots of production-diaries, behind-the-scenes footage, outtakes and so forth. The DVD and Blu-ray will be a whole treat for anyone that loves the movie.

Besides a few offhand references to tablet gaming here and there throughout the movie, there wasn’t much covering the development of touchscreen gaming like tablets and iPhone. Is there a reason for that?
We definitely had more of that in the film in earlier cuts; in sort of our four hour cut (laughs). As well as a lot of other topics, such as women in gaming and education in gaming. A lot of those things are covered visually, and we tried to get the point across visually, but what it really comes down to is trying to cover the peaks and valleys of the subject matter in a ninety minute film in a way that a wide audience can enjoy it. People that are gamers; people that aren’t gamers - it was not easy. But I feel like Video Games: The Movie is sort of an entry point for gamers and non-gamers. If they liked that then I feel like it might be sort of a catalyst for them to look into some of those other topics a little bit deeper, if that makes sense?

Interesting you say that. I felt that the film is a great overall look at the medium from start to finish, but there are lots of topics that could be explored in greater depth – almost like a TV series…
Right, right. And so there is… well nothing official to announce yet, but it is something that I’m tinkering with. A follow up in some form or another because the reception of the film has been good and I think it’s something that deserves more treatment in film and television.

How did actor Zach Braff and Cliff Bleszinski get involved as executive producers and what did they contribute to the format of the film?
You know the Kickstarter campaign really did as much for us in raising money as it did for giving us publicity and exposure. So about halfway through our Kickstarter campaign we received a generous donation from Zach Braff, who became our executive producer. And Cliff I had interviewed probably just a couple of months beforehand, so he had been tracking our progress and watching our Kickstarter updates. When he saw that Zach had come on board as executive producer and knowing he wasn’t even from the games industry but had contributed to that $10,000 level, I think it almost challenged him. I think Cliff sort of thought, “hey, I’m an advocate for this industry, so I need to step up, too (laughs).

There’s some great quotes from Cliff. One in particular I enjoyed was his reference to the act of developing a game and all the skills required, suggesting a studio is like forming the “Avengers of talent!”
Yeah that’s a great quote, one of my favourite quotes of the movie.

But all the interview subjects talk really passionately and openly about their various roles in the development of video games throughout history. You’ve got some big names in there like Peter Molyneux and Hideo Kojima. Did you get everyone you wanted? Were some harder to get than others?
Well anyone that’s a gamer knows that probably the most conspicuous absentee, if you will, is Shigeru Miyamoto. He is represented in the film via archival footage and still-images, but we weren't able to get an original interview with him. We tried and got really close several times – we were even willing to go to Tokyo, but it just logistically never happened, so that was sort of a disappointment. But then we were able to get Reggie Fils-Aime from Nintendo America and that was awesome. And just being there and being able to tour their facilities was really surreal, because I grew up playing - like many people - Mario and Zelda. So that was just a really thrilling experience.

Probably the next two hardest were, Nolan Bushnell, who was just a bit more difficult to get than Hideo Kojima, who obviously has an entourage of people surrounding him that make it hard to get access.

The film walks the tightrope between showing appreciation and not falling into fuzzy nostalgia admirably. Did that come from a natural respect for the subject matter? Are there cuts of the film that went one way more than the other?
Absolutely yeah. Keeping that balance of making it entertaining, but also getting across accurate information – with an energetic pace that moves forwards… and in the end you only have ninety minutes to tell all this information. That was the most difficult part of the editing process. There were times when we spent too much time on one topic or not enough, and it effects the whole balance and energy of the film. And so having the four-act structure that we did - history, culture, creation and future - really did help to keep it balanced because if one section got too long then that of course squeezes the next section to be shorter and vice-versa. So having all those sections equally balanced and paced was the hardest part of the process, but then also the part of the process that I feel makes the film work as a film, if that makes sense.

Speaking of the future and the Oculus Rift, you interviewed Palmer Luckey; did you also get a chance to try it out and what did you think?
I did, I demoed the Oculus a couple of times and I just love it, honestly. As Cliff and a few others in the film talk about, the early iterations of VR were just really clunky and I was really hopeful as a gamer that they would make some breakthroughs, but it didn’t happen for years and years. So the first time I put an Oculus on and tried it out I thought, “ok they’ve figured it out; now it’s just about making enough games that can support that.”

I imagine you’re knee deep into your next project by now, any sort of sneaky hints as to what you’re currently working on or looking towards?
Like any other independent film maker, or otherwise, you’re always working on a handful of scripts and ideas because you don’t really know which one’s going to work or which one you’ll get financing for. And so like any other film maker, I’ve got several projects in the wings. One is another documentary that we’re sort of beginning development on. We’ll see if that happens. And like I said, there will be a follow up on games. What that looks like or what that is, is still to be determined, but definitely a follow up on games.