Isle of Bxnes (grab it here) is a challenging and unforgiving roguelike adventure, smugly looking down on those not worthy of its time. Set in the Stone Age, you guide a little nomadic tribe across the ocean, fighting barbaric savages and plundering loot. In true roguelike fashion, brutal difficulty, permadeath and little explanation about the mechanics should be assumed. But don't let this turn you off. If you're willing to persist with Isle of Bxnes, you'll find just beneath the surface an enjoyable difficult RPG that showcases the best elements of the roguelike genre. For our review, look here.

To get you started in your quest to be the most savage caveman of them all, Grab it Magazine has put together its Top 10 Tips for Isle of Bxnes.

Also be sure to check out Issue 1 of Grab It - The Game Discovery App. It includes 22 in-depth reviews of indie iPad games, 14 exclusive interviews and five big features including our big reveal for the amazing Thralled.

1. Know thy enemy - Most enemy types are extremely dangerous, brandishing powerful attacks and capable of absorbing lots of damage. However, each enemy type has predictable patterns of attack. Memorise those patterns and exploit their weaknesses. Don’t forget, there’s no shame in running away to recuperate.

2. Prepare for your demise - You will die. Often. But at least you can prepare for the inevitable. By handing over furs (dropped by enemies) to your "mating partner," you will be able to produce sons. Make sure you have always procreated two sons (you can have a maximum of three), waiting to take up arms and avenge your death. Furs are a relatively rare commodity, but when it comes to spending them, this is your highest priority.

3. Explore everywhere... - If you’re feeling confident, take on every enemy, break open every object and explore every cave. You’ll come across some nice upgrades and bag a bunch of resources (hearts and furs) in the process.

4. ... but use your head - Sometimes the risk outweighs the reward. That cave you just explored might lead to a boss monster (like a giant, angry turtle) or a champion fighter. The loot they drop may not be worth the risk of losing a character or two, or worse, permanent death.

5. Walk this way! (or don't) - You may come across environmental obstacles or traps. If a ranged fighter is attacking you from inaccessible ground, it’s best to back away quickly. Also, make sure you’re not standing in the middle of an environmental trap when taking on the enemy, as this will deplete your health very quickly.

6. Eat your heart out - Make sure you use those healing berries and don’t forget to visit your local Witch Doctor. If you play Isle of Bxnes somewhat aggressively, you’ll quickly amass a pile of hearts, needed to heal wounds. Be generous in your usage of hearts to heal your wounds, especially later in the game when the difficulty kicks it up a notch.

7. Master the dodge function - This is your greatest ally. Use it often whenever you encounter enemies. If you get to know their patterns of attack, you will be able to perfectly time dodging out of the way of an assault, and back in to strike while their guard is down.

8. Invest in strength, focus and agility - Sometimes the best strategy is brute strength. When you are awarded skill points, think about investing in "muscle," which will increase your attack damage. However, "focus" is also a good skill as it will increase the chance of landing attacks. Spare a thought for "agility" as well, which will enable you to more effectively avoid enemy attacks.

9. Upgrade your "attack" character skill - Isle of Bxnes is fairly short, so you will only be able to upgrade a small portion of your character skills. For your first playthrough, we recommend focusing on your "attack" skill, in particular the first row (increases damage output) and the second row (increases weapon range). Perhaps the most effective skill in the game is your weapon range, as you will be able to club enemies out of their reach.

10. Devise your own strategy - Our most important suggestion is to jump into Isle of Bxnes and try it yourself. Our guide will only take you so far, with there being much more to uncover, and multiple playthroughs are enncouraged. Tailor strategies to suit your own playstyle. 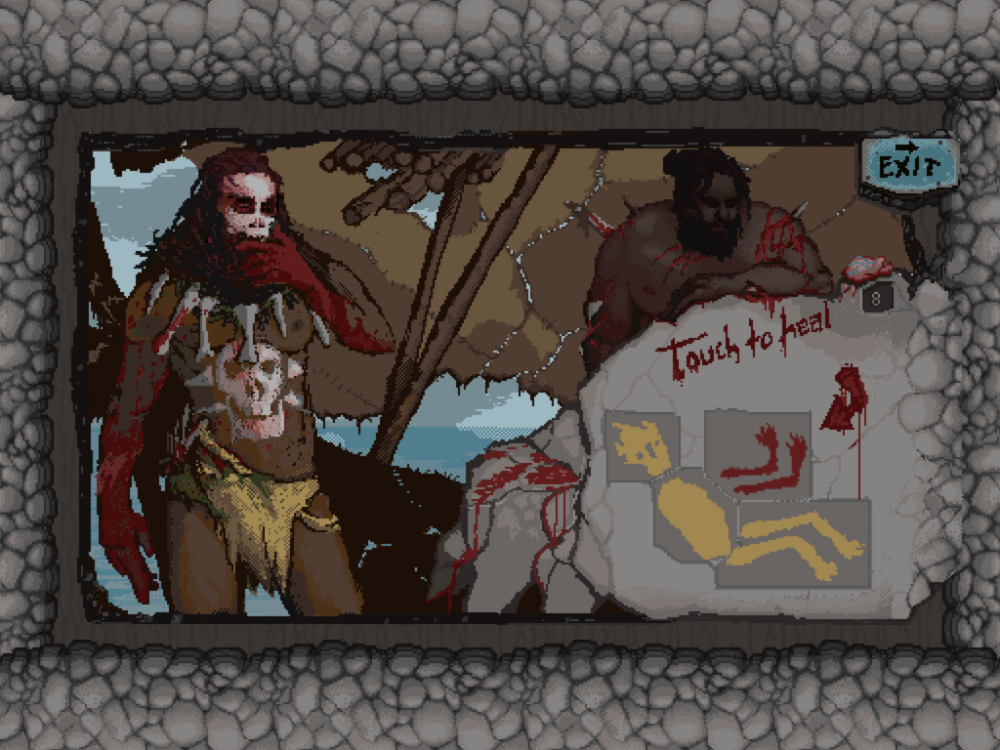