When we put together our Top 10 FPS Games on iPad article for Episode 2 of Grab It, it made for a surprisingly impressive list for a genre that wouldn't at first feel like a natural fit on touchscreens. However, the genre has come on in leaps and bounds in recent years.

The Modern Combat series is often compared to Call of Duty, for obvious reasons. But what is indisputable is that Modern Combat has established itself as one of the premier shooters on iOS. After four iterations, with Modern Combat 4: Zero Hour Gameloft has nailed the fundamentals of a solid, approachable and fun mobile FPS experience. And yes, for all those waiting to hear it – the controls are as tight and responsive as we’ve seen in any shooter on a mobile device. The plot may follow the well-worn path of its many peers, but at the end of the day, I don’t play first-person shooters to stimulate my noggin. The high-end production values also make an impact: as this may be the most beautiful looking shooter I’ve come across on iOS. A great game for Retina screens.

If you’re feeling tentative about dipping your toe into the icy water of the mobile FPS genre, this is a solid place to start. And the game is currently on a big sale, down from $6.99 to just 99c. You can grab it right here.

You also may want to check out our article, A Step-by-Step Guide to Playing Quake II on an iPad.

What is it about the idea of a sale that makes us so excited? Sure, it means we save a few bucks, but maybe it's the notion that we've somehow got the upper hand on a retailer or merchant. I know from personal experience that if I even capture a glimpse of a 'On Sale' sign, I'm attracted to it like a bee to a flower. Unfortunately, I often end up getting sucked in to buying something I didn't really want or need.

Well, the good news is that there's some pretty sweet deals going down on the App Store at the moment. I can guarantee that you won't walk away unsatisifed if you pick up any or all of these deals! Even better, you'll be supporting some incredibly talented indie devs. 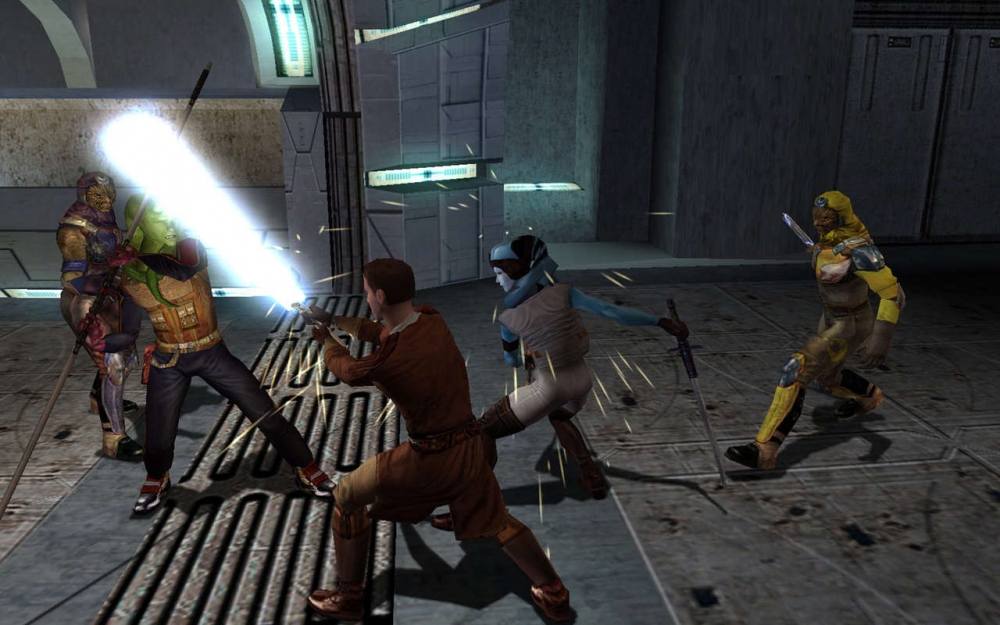 While Disney has been busy in recent days writing-off awesome Star Wars universe expanders such as BioWare's brilliant RPG Knights of the Old Republic as non canon, gamers shouldn't really care. It doesn't make this bona fide classic any less essential a play. Seemingly capitalising on all the talk, the game has just been hit with a big price drop, plummeting from $12.99 to $4.99 - you can grab it right now.

For more recent fan from a galaxy far, far away, the free card-based strategy game Star Wars: Assault Team, and NimbleBit's retro-flavoured superweapon builder Tiny Death Star are both well worth a look. 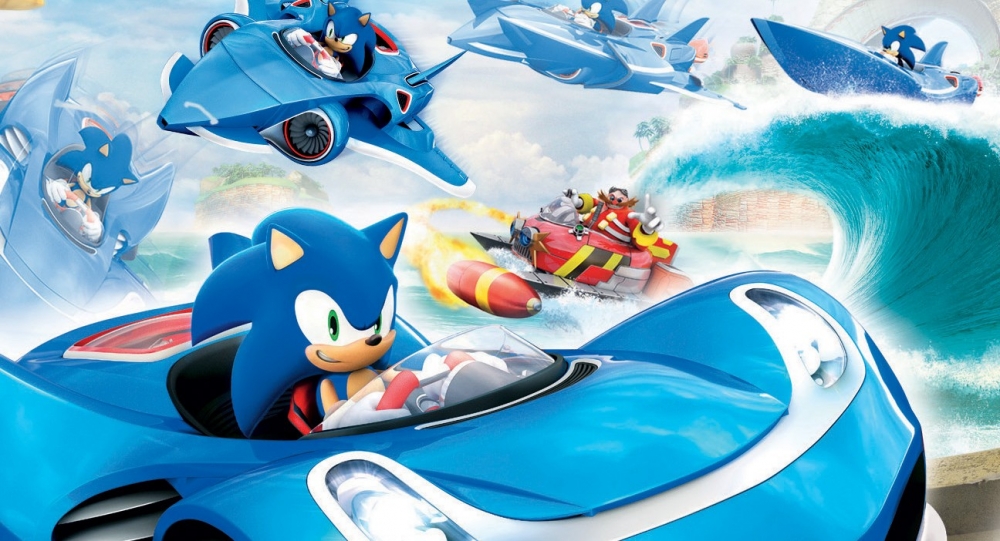 Sonic the Hedgehog - legendary gaming mascot, platformer, kart racer, sometime tennis aficionado. However you visualise the spikey blue one, he has been hard to avoid over the past two decades. If you want to catch up on his escapades, three of his games have just been slashed on the App Store.

Click the game names to grab the bargains. And while you are on the App Store, why not check out an episode of Grab It:

Apparently robots love ice cream - so much so they have invaded our planet with the intention of mining it for the calorie-rich resource.

Developer Dragon Army's deceptively simple shooter is a good pick-up for the princely sum of nothing. Robots Love Ice Cream borrows mechanics from many of the original genre defining titans - Space Invaders, Missile Command and Defender - and adds its own charming sprinkle of flavour.

Fending off the invading robots using an ice cream truck that fires a weaponised version of the dairy dessert is a lot of fun. The idea is to defend your factories from the enemies that hover over them and attempt to beam up your ice cream. Hordes of robot minions will attempt to get between you and their overlords, honourably sacrificing themselves to enable the theft.

Defeated robots will drop the game's collectible currency - Sprinkletonium - with which you can upgrade your weapons. I wouldn't mind betting that Dragon Army are testing the free-to-play waters with this price drop to zero, as the game is very much set up to reap the rewards of the business model should it reach that all-important critical mass.

Robots Love Ice Cream really is a nicely put together package and certainly deserves attention, I just hope that if it does switch to a F2P model that it does so whilst retaining its current dignity.

Check out the trailer below and grab Robots Love Ice Cream here. Is it not surprising that I really feel like an ice cream now?

And for an absolutely brilliant modern take on Space Invaders, TAITO's Space Invaders Infinity Gene is a must have. Seriously, your iPhone and iPad need this game. Yesterday.

Zeptolab's fantastic Cut The Rope series has been a go-to recommendation for physics puzzlers since its release in 2010.

Physics puzzlers would be nothing without physics that feel really dependable. They need to make you believe that, if you did exactly the same thing twice in a row, the outcome would be exactly the same. On top of this they need imaginative puzzle mechanics that are gradually introduced in a way that teaches the player the rules of the game's physics environment, laying out the tools with which puzzles can be solved.

If these physics, mechanics and great level design weren't then packaged in an appealing way, all that effort would be for nothing, as players would quickly move on. Yet Cut the Rope ticked all those boxes in 2010.

Greedy but loveable character Om Nom's constant pleading for more candy - with his little urging sounds and big needy eyes - is hard to deny. The simple idea of cutting and manipulating pieces of string from which dangle a bright hard candy was executed brilliantly. Many themed level packs have been added to the original Cut the Rope over the years - such as the Cosmic Box, Magic Box, Valentine's Box, Tool Box, Toy Box and more - making for great value.

Follow up games Cut the Rope: Experiments (2011) and Cut the Rope: Time Travel (2013) added new mind-bending ways to feed candy to Om Nom, and all three games are a credit to Zeptolab. A proper numbered sequel released in December 2013 - Cut the Rope 2 - making for more candy-feeding madness than even the level designers at Zeptolab probably thought possible.

Now is a great time to jump in as Cut the Rope: Time Travel is currently 50% off. You'll be feeding Om Nom in the themed levels of the Middle Ages, Renaissance, Wild West and even a Disco era!

Check it out below, and grab the awesome iPad puzzlers from the below links: and don't forget, to discover the best new indie iPad games, you just got to Grab It.

In Episode 2 of Grab It we reviewed The Shadow Sun - a fantastic Western RPG developed specifically for iOS by Ossian Studios - and gave it 4.5 out of 5 stars.

In our verdict we concluded; "Ossian Studios has created a world that feels like it has always been there, with its lore and world constructed with love. Add exciting combat and hours of quests, and The Shadow Sun is a genuine iOS RPG classic that could make a console jealous." (Grab the issue and read the full review)

Today Ossian Studios released an update for the game that adds your very own pet dog companion that will travel with and fight alongside you. I jumped straight into the game this evening to find out more.

After the opening story exposition and a couple of fights, which all act as the game's tutorial section, your new canine companion will be waiting for you in the hideout. You'll get the opportunity to name the dog yourself which is a nice touch - I named mine Bob.

After that I headed off to the Warehouse District for my first encounter with Bob by my side. He'll attack your enemies, or guard you if you choose to put him in support mode for some extra defence. When not in a fight, Bob loped reassuringly by my side. During your adventure you'll now find toys and treats to improve your dog's stats. It's a fun addition to an already great game.

Also included in this update are some camera improvements and bug fixes.

Check out the trailer below, and grab the game here if you haven't already. It's on sale at the moment too for a reduced price. Finally, for a deeper look at what constitutes a Western RPG, have a read of our ABC of RPGs article here.

If you followed our ABC of RPGs series of articles, you will have seen Warhammer Quest feature in part 6, which focused on Strategy RPGs.

For an SRPG alternative it's hard to go past the classic Final Fantasy Tactics: War of the Lions from Square Enix, which you can grab here.

Check out the trailer below for Warhammer Quest, and if you are looking for a new and exiting way to discover the best indie games on iPad, be sure to give Episode 3 of Grab It a go. We make finding new games a heck of a lot of fun!!

Original Story: Mueller, Mueller, Mueller. This is the game everyone was asking for. Well not quite, but we're glad it exists. Despite taking obvious inspiration from Matthew Broderick's classic 80s school jigging film, the similarities end with the title.

An old fashioned point-and-click adventure, Ferris Mueller, rather than being a happy-go-lucky adolescent is naturally a small green horse in a Wild West town. And instead of partying like it's 1986, your quest is to track down nine hidden golden carrots. If this hasn't piqued your attention, nothing will.

Ferris Mueller is a rather quirky title, offering up some interesting puzzles and laugh-out-loud humour. It's definitely worth chucking a sickie to give it a go. You can grab it right here.

Also if you like games about movies, why not check out Robocop.

Do yourself a favour and get over to the App Store now and pick up Papa Sangre II. The game starred in Issue 1 of Grab It Magazine, which you should also grab, and also made our 50 Best Indie iOS Games of 2013. The gameplay is audio driven, with you closing your eyes, plugging in some headphones and following the narrator (actor Sean Bean no less) as he leads you through the afterlife.