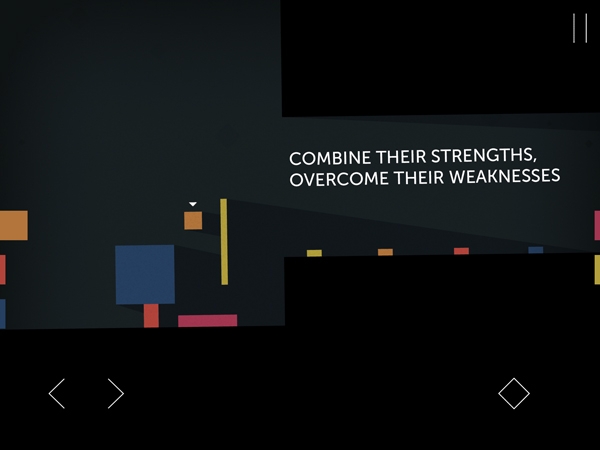 Thomas Was Alone was already an established indie darling well before it made its way to iOS. A big success on PC back in 2012, it has garnered plenty of hype ever since, so I went into this review expecting something pretty darn special. And almost immediately, I began sinking into the game’s unique character study and to understand why Mike Bithell’s minimalist platformer is so highly regarded.

Getting British funny man Danny Wallace involved as narrator instantly sets this game part from the many platformers on the App Store. His voice gives the characters and their interactions with the world equal parts sarcasm and wit. And while, at first, it sounds as if his narrations are read straight out of a child’s story book, the tone shifts pleasingly towards something more reminiscent of Wheatley from Portal 2.

It speaks volumes about how well Thomas Was Alone’s story is conceived and constructed that you can even call the different coloured blocks that act as the game’s avatars “characters.” Each character is introduced as a different variation of a sentient artificial intelligence that has been created by the company Artificial Life Solutions. Thomas, the young and spirited red block, becomes the glue that combines all these characters together as he journeys through the world. I became quite involved in seeing the world change through the eyes of these characters as they themselves evolved, empathising and rejoicing in equal parts as they solve basic level-based puzzles together. When Chris, the grouchy orange block, has his heart melted by the bouncy pink block Laura, I was right there in the moment.

And that’s why I love Thomas Was Alone - this is a game about the weirdoes, the outcasts and the misfits. I think most gamers will relate to the everyday plights the characters face. Feeling used, experiencing love, being alone or simply not fitting in are raw, human emotions and it helps make this an endearingly honest game. Perhaps even more importantly, it makes you think about how others feel.

The segmented narration also bleeds into the act of play, because it only appears at certain points of a level, driving you forward so you can learn more. As I jumped through the ever-changing blocky landscape, I appreciated how its simple design fit into the story perfectly. The minimalist art style is teamed with a sinuous score from composer Paul Housden, conjuring an atmosphere of seclusion and desolation that allows the brightly coloured characters to burst from the dull backdrop with bubbling personality.

With such strong visual and story design beating at the heart of Thomas Was Alone, Curse Studios – who ported the game to iOS on behalf of Bithell – has smartly kept the controls smooth and simple so as not to let the act of platforming get in the way of the real meat. Simple left, right and jump controls allow you to navigate past obstacles and I never felt overly challenged, or bored.

While it’s obvious that I thoroughly enjoyed the game, I did face a big issue during level 11.5, where the game started to lag to the point that I could barely play at all. I’m sure this is something that will be addressed in an update, but it can’t be left unmentioned and as far as I can tell, has plagued other users as well.

Yet when I had finished with Thomas was Alone, I wanted more. I wanted the story to go on forever. I’m sure, even as a baby, I have never cared as much for a set of blocks as I did here. It’s a case study on how grand ideas and important themes can be carried by even the simplest of designs when its heart is in the right place. Well worth the asking price, you’ll grow to love the characters and yearn for more once you’re done.