Will paid mods being the next "microtranasations?" Grab It dives deep into the main questions that need to be answered should Valve continue with its plans to provide a paid mods marketplace on Steam.

Valve, the company behind digital distribution service Steam, must be pretty disappointed with Skyrim fans right now. After the vocal hostility to its introduction of a paid-mod model to the game's Steam community, it has a lot of thinking to do about how to tweak its approach to allowing mod creators to charge for their work. And you can be sure: there is little doubt Valve will regroup and try again - it has invested too much into the endeavour to abandon it after just one attempt - but it will have to overcome a whole lot of jaded resistance when it comes time for round two.

If you haven't been following the story, here's the Cliff's Notes summary: Valve recently made it possible for community-made modifications to the open-world RPG Skyrim to be sold on Steam. Prior to this, all mods distributed on Steam had to be free; if a creator wanted to charge for their work, they had to use another distribution service for advertising and hosting. The community response was swift, loud, and for the most part, negative.

Also Read: Our iPad Magazine with 68 Exclusive Interviews into the Making Of Indie Games

Complaints ranged from the standard, “you want me to pay for something that used to be free?” and “modding is about creating for fun, not profit,” to more complex concerns about the revenue split. Valve took 30% of the cut; the makers of Skyrim - Bethesda - took 45%; and the creator was left with a measly 25%. Then issues with piracy arose - people other than the mod creator uploading copies of paid mods for free, or stealing and charging for mods they didn't create. Few people argued that mod creators shouldn't be allowed to make money off their work at all; the contention was instead focused on Valve's implementation of the scheme, rather than the ethos behind it.

Regardless, the uproar prompted Valve to roll back the scheme less than a week after its launch, and only days after Valve's managing director Gabe Newell publicly announced on Reddit the company's strong support for the initiative. In the wake of all the indignation and finger-pointing, there are some important points to consider; points that Valve is no doubt discussing in great detail as it revises its approach to this volatile situation:

The Status Quo
Change is often a tough sell. People get used to the norm and change carries with it the fear of the unknown - the endless abyss of imagined nightmares that could lurk around the next corner. By introducing the paid mods scheme into Skyrim, a game with perhaps the biggest modding community since Quake and Doom back in the 1990s, Valve sundered the status quo with an axe, causing many players to envision an imminent future where all mods were paid and all the enjoyment they'd had in the past was locked behind a paywall forever more.

Also Read: Is Sprked the Solution to the Paid Mods Scandal?

This sense of loss cuts deeply, even if it was a worst-case scenario and Valve wasn't technically depriving people of anything. Unfortunately, response to change is not always rational, as the uproar proved. If Valve wants to institute such a notable change to the current system, its best bet would be to introduce it with a new game, one that does not come clouded with a history of freely distributed mods. Like the recently released reboot of the Unreal Tournament franchise from Epic Games, which integrates a modding marketplace from the get-go, starting fresh would significantly reduce potential backlash from spurned fans. 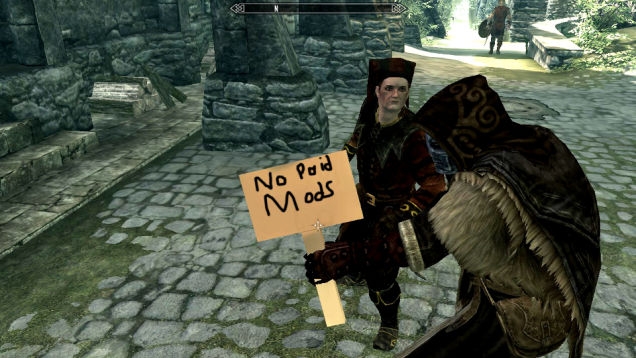 Collaboration
Many mods on Skyrim are not singular affairs. The most popular creations integrate and iterate on the works of other mod creators to produce a holistic product that is greater than the sum of its parts. This is only possible thanks to the free distribution model. Since there is no compounding cost, creators can easily collaborate to produce massive, full-scale recreations of the world of Skyrim without needing to individually handcraft new UI elements or expanding player housing; they can simply incorporate mods that already exist. For a project that is often the work of a single developer in their spare time, having access to thousands of ready-made components allows them to dream bigger and achieve more than they ever could alone. Much like Unity, or Unreal - as well as other game-making engines - all mod developers are able to reap the benefits of progress.

Money, however, complicates things. What does a creator do if they want to incorporate someone else's paid mod into their own package? Can they just buy it once themselves and go nuts? Not likely; someone selling their mod is not going to want it distributed for free in someone else's product. More probably, the two parties will have to negotiate some sort of licensing agreement... and that's a messy proposition even between big companies with highly-paid lawyers. It is doubtful that unrepresented parties would be able to reach an amicable accord - the creator of the original mod will want too much, and the applicant will be prepared to pay too little.

Even if a deal is ironed out, considering it is unlikely to incorporate a legally binding contract, there will always be the chance for exploitation from one or both parties. Policing such collaboration would be nearly impossible, even if Valve implemented a system of mediation. And that doesn't even touch upon the sticky issue of people charging for insubstantial re-skins of others' free mods...

Motivation
A less immediate implication of introducing money into a pleasure-based economy relates to a psychological phenomenon known as the over-justification effect. In brief, it is the subconscious shift in a person's motivations from doing something for the inherent pleasure of it, to doing it for external satisfaction.

One of the landmark psychological experiments that helped classify this phenomenon involved young children who enjoyed drawing. They were observed happily drawing away for some time, at which point half the group was promised a reward if they continued to draw. Surprisingly, those offered the reward were less inclined to continue drawing, and exhibited less pleasure in doing so. Many other experiments since have supported the phenomenon, whereby subjects who had previously justified to themselves that they were engaging in an activity because it was enjoyable, would come to associate the activity with “work” once some form of tangible reward was introduced.

To bring this back around, a paid-mods scheme has the potential to promote this phenomenon. Modders who had previously created their mods for themselves, or for the simple satisfaction of creating something that others enjoy, will face a tough question: do I continue to give away my precious time and skill while others are charging $2 a pop for a new digital hat? Such altruism is hard to justify, and there will be many who decide to abandon the effort entirely rather than choose a side. Others will concede to the economy; why should they be the only ones not profiting from their work?

Then comes the psychology. Once a modder has been paid for their work, a scale in their mind will start to tip. Each dollar will shift the balance further and further. Before they know it, they will have built up a monetary justification for their hobby. Suddenly, the thought of making mods for free will seem ludicrous. Why would they ever give away something they could sell instead?

Of course, this is a worst-case scenario. Not every modder would succumb to the over-justification effect, and even if they did, it isn't always a bad thing. Plenty of entertainment is produced by people motivated by money. Still, it's an important factor to keep in mind. If mods start targeting the largest demographic in order to make the most money, what will happen to the core tenet of mods: creativity? Experimentation would wane, in the same worrisome fashion of big-budget AAA titles moving away from taking risks and relying more and more on market-testing and popular trends. After all, how many rough, yet ambitious, games have failed over the years due to the risk-averse nature of consumers?

Crowd-sourced Development
Looking into the future, a disturbing notion arises. There has been a recent trend of PC games being released missing options, enhancements or even entire modes from their console brethren or their contemporaries. In many cases, modders have stepped up to the plate and built or unlocked these features in lieu of the actual developers. Without the work of these talented individuals, PC players would have suffered inferior ports and perhaps boycotted or flamed the developer in retaliation.

What would happen if these modders started charging for their work? Paid patches for a broken or incomplete game? Many gamers are already up in arms about some of the more flagrant DLC initiatives of recent times - on-disc DLC and seemingly-cut content among the most egregious. How would they react to the notion that they couldn't play the optimal - or merely unbroken - version of the game they paid for unless they ponied up for unofficial “patches?” Worse, what if developers began to rely on these crowd-sourced patches to resolve last-minute bugs in their games, in order to “finish” development by deadline? Post-release patches are already becoming commonplace on all platforms, with games like Halo: The Master Chief Collection requiring a 20GB patch on day one to unlock the multiplayer, not to mention the dozens of patches that game has received in the eight months since its release in order to fix its still-flaky online component. If a developer was under pressure to deliver on a timeframe it knew was unfeasible, it is not too much of a stretch to imagine the studio justifying shipping a buggy game with the reasoning that “modders will fix it.” The developer would get paid, too, so it would be win-win, right?

These issues paint a bleak picture for the future of paid mods. But they represent the theoretical pitfalls of what is potentially a likely venture. Mod makers should have the right to charge for their work if they wish; it is tough to argue against that. Unfortunately, there's a lot more to consider than that. Were the answer to paid mods as simple as that statement, this article would have been a whole lot shorter.